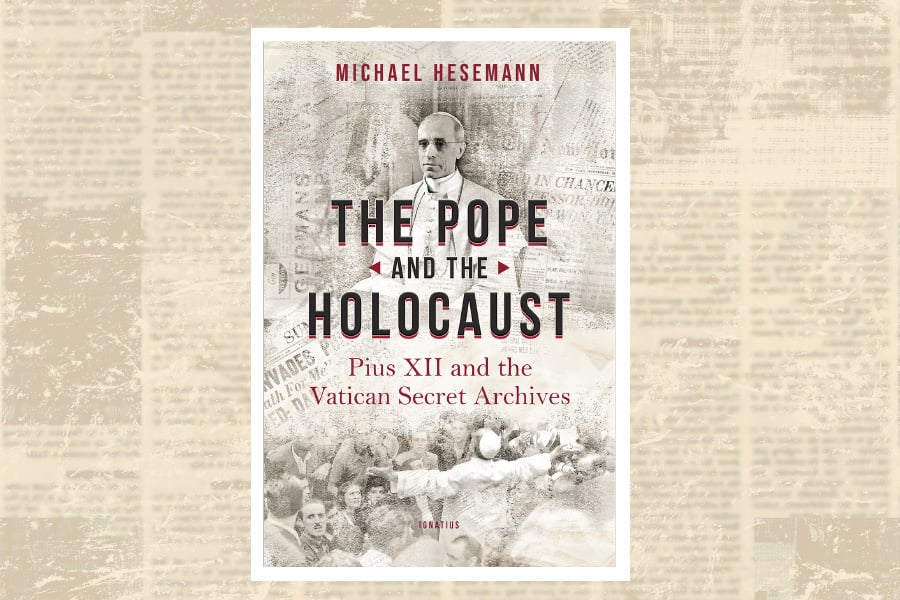 Before reading this book, I had only heard snippets of suggestive information regarding what role the Vatican played during World War II, ostensibly humanity’s darkest hour. I cannot entirely remember now where or from what source I heard them, but I was aware that there were criticisms of the wartime conduct of Pius XII, who was pope from 1939 until his death in 1958.

I knew that those criticisms revolved around claims that he was negligent at best in addressing the horrific plight of the Jewish people, with some detractors even going so far as to accuse him of outright collusion with Adolf Hitler, the orchestrator of the Holocaust. It is possible you may even have heard him referred to as “Hitler’s pope.” Now, after having experienced the historical tour de force that is Michael Hesemann’s “The Pope and the Holocaust: Pius XII and the Vatican Secret Archives,” I can say with confidence that those rumors are entirely baseless.

Hesemann’s work is meticulous in the extreme; a book that is not for the historically faint of heart. It is filled-to-bursting with information that Hesemann has retrieved from the Vatican Secret Archives, including personal letters written by Pius XII (Eugenio Pacelli) himself and correspondence from various figures intimately involved in the Holy See’s extensive rescue operations during the Holocaust. They detail, among other things, Pacelli’s disgust with Hitler and everything he stood for, his involvement by proxy in multiple intricate plots to assassinate the leader of Nazi Germany, and the enormous sums of money that he poured out from the Vatican purse in order to aid Jews in their flight from the madness of the Nazis. Utilizing these superb sources, Hesemann hammers home just how perilous Pacelli’s situation was; how one unscrupulous word or diplomatic misstep could have brought about even further catastrophe.

Some of the most powerful testimonies as to the character and work of Pius XII that Hesemann places before the reader are those of prominent figures in the Jewish community of the time. The book includes letters and post-war interviews with rabbis, refugee relief workers, Jewish historians, and everyday people who all credit the intervention of Pacelli and other Vatican officials with mitigating the Jewish death toll. In addition to these heartfelt commendations, there are spine-chilling remarks from Nazi party officials, including some from Hitler himself, all of which reveal their shared antipathy (and fear) of Pius XII. They would have thought the appellation “Hitler’s pope” utterly absurd. Just as there were Allied plots to kill Hitler, there were Nazi plots to kill Pacelli, whom they regarded as one of the greatest personal threats to their maniacal schemes.

One of the most striking revelations of Hesemann’s book for me was how quickly Pacelli caught on to how dangerous Hitler and the Nazi Party were. Long before many of the nations that would eventually become the Allied Powers (including the United States) recognized the Nazis for the evil that they were, Pacelli knew from his work as Cardinal Secretary of State prior to the beginning of the war that a noxious whirlwind was about to be unleashed in Europe. And the Nazis themselves were aware of his knowledge, decrying his election to the papacy with slurs and invective in their propaganda press. After Pacelli became Pope Pius XII, Joseph Goebbels, Nazi Minister of Propaganda, described him in his diary as: “A political pope and possibly a militant pope who proceeds skillfully and cunningly. So watch out!”

All of this is to say that I firmly recommend this book to anyone with a keen interest in World War II and/or Church history. You will learn much more about the role of the Catholic Church during the conflict than you likely knew beforehand, gaining a glimpse into a dimension of the Vatican which is seldom seen. I can also envision Hesemann’s book acting as a superb repository of source documentation that wouldn’t be out of place in the military history section of a library. It is a mighty defense of a pope whose name deserves to be counted among the greatest heroes of the twentieth century.