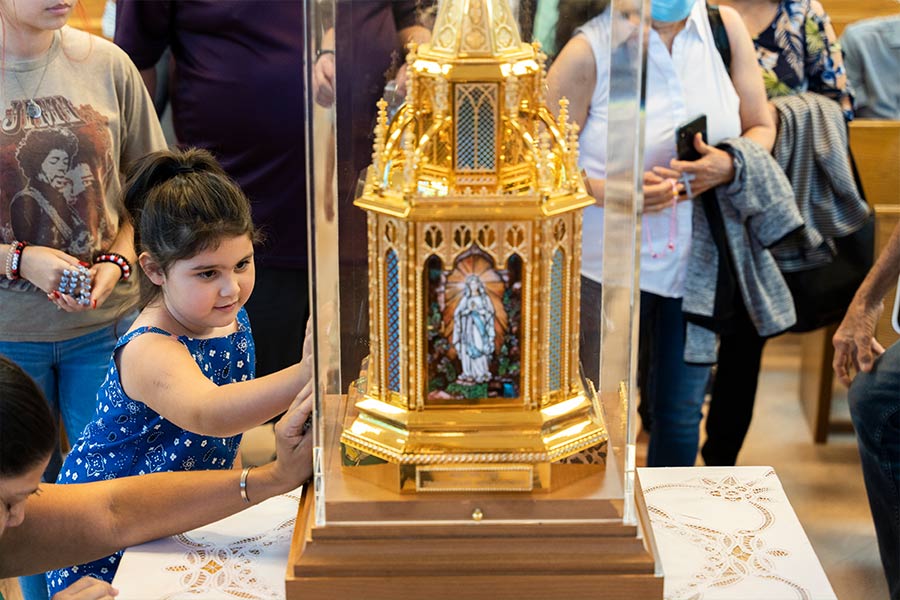 Dora Moralez of Vernon venerates the relics of St. Bernadette on July 21, 2022 at Our Lady of Lourdes Parish in Mineral Wells. (NTC/Juan Guajardo)

MINERAL WELLS — Martha Peña came to venerate the relics of St. Bernadette Soubirous hoping for a miracle but not really expecting one.

The Iowa Park resident made the 90-minute trip to Our Lady of Lourdes Parish in Mineral Wells July 21 with her 40-year-old son, Andrew, who was born with cerebral palsy.

“Miracles are always in the back of one’s mind and that would be wonderful, but spiritual healing is really what I’m looking for,” said the Christ the King parishioner who guided her eldest child’s electric wheelchair up to the striking gold reliquary. “He’s never been to a place where he could see a relic so I thought this would be a good opportunity for him.”

Hoping to renew or strengthen faith, find peace with a difficult life situation, or simply reflect on the holy life of a French peasant girl brought more than 3,000 people to the rural Palo Pinto parish July 20–22. Our Lady of Lourdes was one of 42 locations in the U.S. chosen to host the relics of St. Bernadette — a 14-year-old asthmatic who saw 18 apparitions of the Virgin Mary and uncovered a spring of healing waters at Mary’s command. The relics also spent a brief time at St. Francis of Assisi Parish in Graford.

“It’s been a blessing for us and so many people who have come here,” said Father Thomas D’Souza, SAC, Our Lady of Lourdes pastor. “They tell me, ‘Now we don’t have to go to France!’”

A well-known saint whose humility and obedience was showcased in the Academy Award winning film “The Song of Bernadette,” the young visionary suffered poor health and initially was persecuted by the French government, Church authorities, and members of her own religious order.

Greeting pilgrims who journeyed to his parish from as far away as Oklahoma, Puerto Rico, Waco, and San Antonio, Fr. D’Souza hopes the people who venerated the relics learn lessons from the saint’s life.

“She never gave up on what she believed. That should be our conviction,” he said. “When we’re standing for life or know something is right, we shouldn’t back down. No matter what pressure you’re facing, stand for the truth.”

The traveling reliquary that arrived in the U.S. April 7 for its first-ever tour of the U.S. was commissioned in 2019 to meet the growing demand of people who wanted to honor St. Bernadette outside of France. Crafted in a neo-gothic style by Spanish artisans, the gold and enamel relic holder was designed to reflect the spirit of Lourdes and the great Marian devotion of the saint. It contains a first-degree, ex-carne (from the flesh) relic removed from St. Bernadette’s incorrupt body 46 years after her death in 1879 at age 35.

Relics remind people of a saint’s holiness and inspire prayers for God’s grace to lead a similar faith-filled life.

Many of the visitors who came to venerate the relics held rosaries, holy cards, and other sacramentals up to the glass-encased reliquary, making the items third-class relics.

“Relics are reminders of the sanctity of the saints,” said Father Joe Keating, pastor of Sacred Heart Church in Muenster, who accompanied a busload of parishioners to Our Lady of Lourdes and celebrated a noon Mass for more than 400 pilgrims.

While studying for the priesthood in Rome, he visited Lourdes and brought with him the candle held during a Marian procession to the Grotto. The spring water that flows from the niche where the Virgin Mary stood “is the source of spiritual healing for so many but it’s really the grace of God that heals us,” Fr. Keating told the congregation during his homily. “It’s our faith manifested in a tangible sign.”

During the reliquary’s stop in Mineral Well, pilgrims were invited to participate in daily Masses, evening candlelit processions to the parish’s grotto, Reconciliation, and an Anointing of the Sick liturgy. Led by a guide from the North American Lourdes Volunteers, the tour included a virtual pilgrimage that allowed parishioners to touch rocks from the Grotto of Massabielle and during le geste de l’eau — the “Gesture of Water” — they were allowed to touch water from Lourdes.

The holy water was used to bless 1,900 rosaries made by members of Our Lady of Lourdes Parish and distributed to visitors. 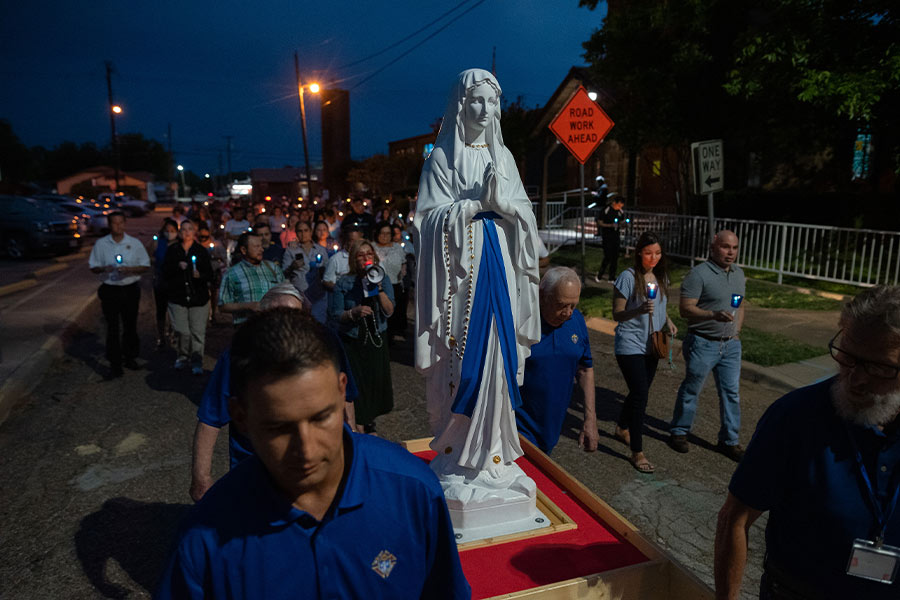 A procession to the grotto was held each night during a special visitation by the relics of St. Bernadette at Our Lady of Lourdes Catholic Parish in Mineral Wells, on July 20 - 22, 2022.  (NTC/Ben Torres)

A youth group from Most Blessed Sacrament Parish in Arlington spent part of its summer mission week in Mineral Wells experiencing the relics and attending Mass. Arrival of the reliquary to the diocese in July was fortunate timing, according to Renee Alarcon, the parish’s youth director.

“When we saw it was coming here, we wanted to make a pilgrimage to show our young people what it’s like to travel to see something so holy,” she explained. “I told them, ‘Normally you have to go to Europe to see something like this. It doesn’t happen in our area very often.’”

Alarcon used the day trip to talk about Our Lady of Lourdes, St. Bernadette, and the process that leads to canonization. Fielding questions from the inquisitive group, she described what a relic is, what makes it holy, and the difference between venerating a relic and Catholic worship of God and the Eucharist.

“I hope this experience lets them know they can go to the saints to get closer to Christ,” she said.

Felix Ruiz, who came to view the reliquary with his daughter and granddaughters, said it’s important to understand the story of St. Bernadette and the important lessons of faith it teaches. Thanks to her trust in the Virgin Mary, a chronically ill miller’s daughter helped create a place of pilgrimage that brings peace and comfort to millions each year. She is the patron saint of the sick, the poor, shepherds, and people ridiculed for their piety.

“We have to remember in times of struggle — in times of need — to pray the Rosary,” said Ruiz, a St. Stephen parishioner. “Instead of dwelling on all the bad things going on and feeling hopeless, we have the Rosary to fall back on. We have Mary to intercede for our needs.”

The St. Bernadette relic’s tour was organized by the Sanctuary of Our Lady of Lourdes in France, in partnership with the U.S. Conference of Catholic Bishops, North American Lourdes Volunteers, Hospitalite de Miami, and the Order of Malta.

Interesting note: The Song of Bernadette is a novel written by Czech-born writer Frank Werfel (who was Jewish) in 1941. It was written to fulfill a vow he made while visiting Lourdes n 1940. If he and his wife escaped the Nazis and reached safety in the U.S., he would write the story of Bernadette who was canonized in 1933. His popular novel (it spent more than a year on the New York Times best seller list) was the basis for the film that won four Academy Awards in 1943.