A Culture of Vocations 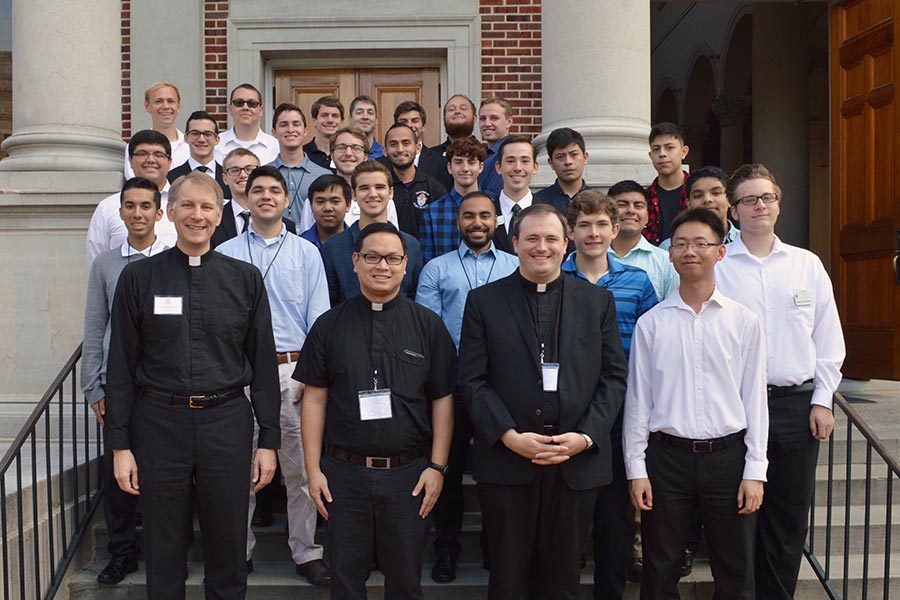 First a van, then a mini-bus, and this year — a full-sized bus. Forty-two young men considering priesthood packed a bus bound for St. Joseph Seminary College in Covington, La., this spring for a Come and See visit.  A record number of young men attended this discernment weekend, compared to 27 attending the same event in 2017.

Since the Diocese of Fort Worth embarked on a team approach to fostering vocations last September, the results have been both encouraging and measurable.

Father Nghia Nguyen, parochial vicar at St. John the Apostle Parish in North Richland Hills, is one of four vocations liaisons. He attributes the increased attendance to being able to “actively encourage young men who have an interest in the priesthood.”

He said the team is able to reach out to more young men because instead of one vocations director, the diocese now has a team of five priests headed by Father Jonathan Wallis, director of seminarian formation at St. Joseph Seminary College. The three other vocations liaisons are Father Manuel Holguin, pastor of St. Peter the Apostle Parish in Fort Worth; Father Keith Hathaway, chaplain at Notre Dame Catholic School in Wichita Falls; and Father Matthew Tatyrek, chaplain at Nolan Catholic High School in Fort Worth. Fr. Tatyrek recently was assigned to St. Peter Parish in Lindsay and newly-ordained Father Maurice Moon will be added to the team as chaplain at Nolan.

Fr. Wallis said this approach “is yielding good results. It’s obvious that it was the fruit of a lot of hard work by the team and the bishop.”

Isaac McCracken, a parishioner at St. Vincent de Paul in Arlington, attended both the fall and the spring Come and See weekends.

“You can talk to seminarians, ask them about their daily routine and just see if you would fit in with the community,” he said.

The diocese currently sponsors 24 seminarians, including 12 men at St. Joseph.

Fr. Wallis said he has noticed that men from the diocese who visit the seminary “know why they’re here. They’re answering the question: ‘Is Jesus Christ calling me to the priesthood?’ It’s turning the focus away from, ‘Is this going to be fulfilling for me?’ toward ‘What is my call?’

“The discernment of vocation really centers on the call of Jesus Christ and an outward focus of that call,” Fr. Wallis continued. “And that’s where I see the four vocations liaisons have worked really hard to talk about discernment of a vocation in that way.”

Fr. Nguyen said that since the diocese is so large geographically, the team has made efforts to offer St. Andrew Breakfasts and Dinners across the area. St. Andrew events include Mass, a meal, and a discussion about discernment.

The vocations liaisons have seen other benefits of a team approach to fostering vocations.

“Having a team of four allows us to build more relationships of trust with young men so they get to know a priest and priests get to know them…we can reach out more than in the past,” Fr. Hathaway said.

McCracken, a University of Texas at Arlington (UTA) sophomore, said he had been active in his parish youth group, but he didn’t seriously consider priesthood until he joined the University Catholic Community at UTA and developed relationships with a few of the priests who celebrate Mass there.

“They are generally pretty open people and you can ask them questions about being a priest,” he said. “When you have a relationship with a priest, you get to see more in depth what their life is like.

“At my parish, we usually only had one priest. It’s a fairly large parish, so we didn’t talk to him personally or see what his life is like,” he added.

Fr. Hathaway explained that in years past, “it was common for people to know their priest, but now that’s not [always] the case. So having four on the team allows us to spend time with them at vocations events, and also to follow up afterwards.”

Fr. Nguyen agreed. “We’re able to foster meaningful relationships by keeping in touch with them, asking how discernment is going and praying for them daily, by name.” 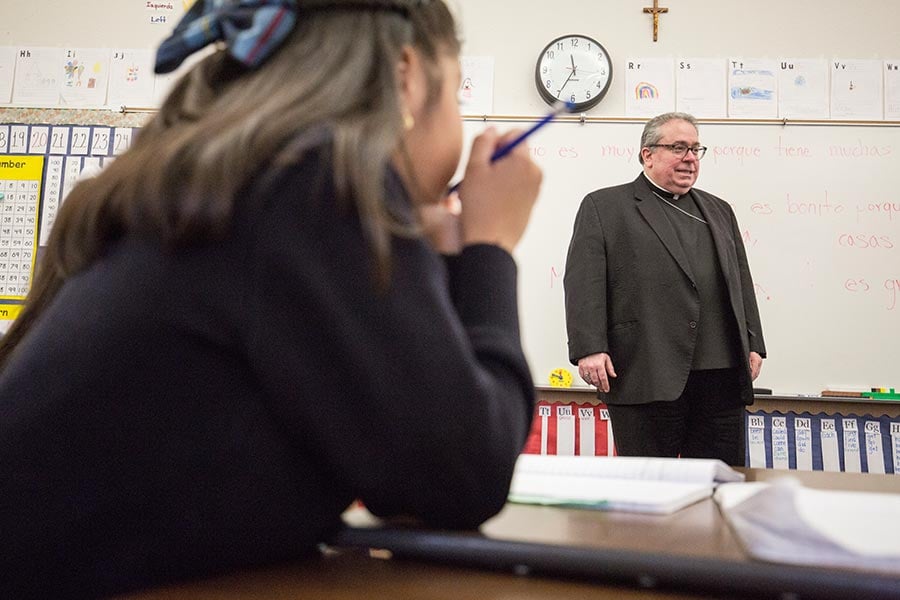 “We don’t bombard them,” he added. “We let them pray.  It’s an invitation to prayerfully consider their vocation.”

This year, diocesan Catholic schools have developed a new approach to fostering vocations also. A key component is pizza.

At the four high schools, seminarians attended Mass with the young men and then sat down for lunch and casual conversations. Over a relaxed meal, students learn about the daily lives of seminarians.

High school students are accustomed to thinking of what comes next, according to Superintendent of Catholic Schools Jennifer Pelletier. Knowing seminarians helps students understand the first step on the path to the priesthood and allows them to envision themselves on that journey.

“It’s a conversation now that’s part of the culture of our schools,” said Pelletier, who took principals and coaches to St. Joseph so they are better equipped to discuss the seminary with interested students.

Talking about vocations should be “part of who you are, part of your imagination,” said Pelletier. An ongoing conversation, not a one-time event.

Another step to normalize the discussion of vocations in high school was to change vocation day from fifth grade to the end of eighth grade. When those students enter high school, they will be primed to consider a religious vocation, the superintendent said.

Fr. Wallis said the diocese is responding to a recent trend — that of younger men entering the seminary.

In past years, the trend was to encourage men to get several years of life experience before considering the seminary. “But the idea now is ‘let’s not thwart the work of the Holy Spirit,’” he said.  “If a young man believes he’s being called to the priesthood then that’s something that needs to be fostered.”

Fr. Hathaway said it can be “discouraging for a young man to hear ‘go to college first and get some life experience.’ It sounds like a ‘no.’”

“If the Holy Spirit is working in these young men’s lives, calling them to follow Christ … we don’t want to put that off,” he added. “Christ calls us in the present moment to be faithful to Him now. So if a young man wants to go to seminary out of high school — if the Holy Spirit is leading him that way, we want to encourage that.”

In addition to being a voice of encouragement, the liaisons share both the joys and the challenges of priesthood.

“We have very clear expectations of priesthood and speak frankly from our experience about the joys of priesthood and also the challenges we face as priests in today’s culture.  And that kind of honesty and transparency, along with a sense of mission and purpose, is a very strong message,” Fr. Hathaway said.

As the vocations team moves forward from this initial success, families, parish ministers, and teachers can help foster an atmosphere of vocations in the diocese.

“Everyone’s first duty is prayer,” Fr. Hathaway stressed. “Pray for priests. Pray for vocations to the priesthood. Pray for them by name. But also encourage them and refer them to us.”

Families can help by being open to discussing vocations with their children and encouraging them if they show an interest. When teachers and parish ministers become aware of someone’s interest in the priesthood or religious life, they can refer them to the vocations team or suggest they attend one of the diocese’s vocations events.

In describing his thoughts about the men he teaches, prays for, and encourages, Fr. Nguyen said, “maybe this is the same guy I will one day call my brother priest.”