A marriage made in heaven: local Catholics develop programs to strengthen marriages 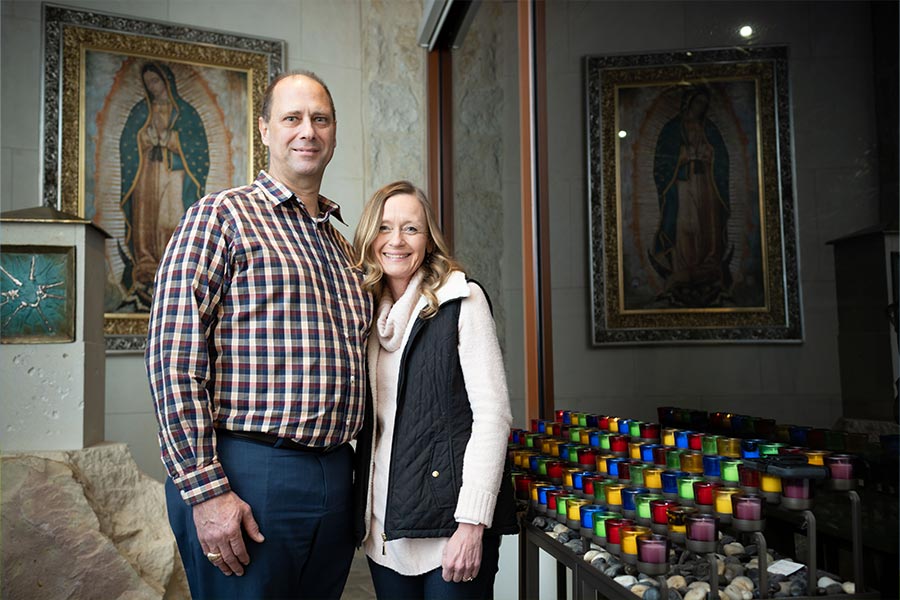 What makes a healthy, successful marriage? Communication, commitment, and knowing how to resolve disagreements with your partner is key. But there’s another important element that’s often forgotten once the vows are recited and the honeymoon is over.

It’s a sacrament that symbolizes Christ’s unconditional love for His people. Grace received from the sacrament helps a couple express God’s truth and love in the world.

“People forget that marriage is a sacramental vocation — a calling, as opposed to a temporary decision,” said Good Shepherd parishioner Sonja Lange.

Together with her husband, Donald, she organizes Marriage on Tap evenings at her parish to remind couples their marriage is a call to holiness, unselfish service, and concern for the other person.

“It was just something that was on my heart,” Lange said, explaining the genesis of the ministry. “There is marriage prep and groups for marriages that are in crisis, but I felt there was a complete lack of sustained catechesis for people who want to grow in a God-centered marriage.”

Held on the first Saturday of the month, the meetings are a mix of relaxed fellowship, informal conversations, and speakers who address issues like managing screen time in a family, growing together spiritually, and learning how to apologize and forgive. Lange tries to balance catechesis with counselors, therapists, and psychologists who give useful tips on improving relationships.

The Saturday “date night” atmosphere — enhanced by adult beverages and appetizers — generates a spirit of community among participants. Carving out a time for socializing is intentional.

“We feel it’s very important to form relationships with other people who have the same faith journey and belief in marriage that you do,” the organizer added. “There are a lot of different views on what marriage is. It’s nice to have a place that thinks marriage is foundational and important. We have a lot of grateful couples who were hungry for something like this.”

When Tom and Micha Aldon married in 1982, the speakers at their pre-Cana retreat strongly urged all couples to eventually consider a Marriage Encounter weekend. Twenty-eight busy years went by before the founding members of St. Ann Parish in Coppell finally took that advice.

“We had a really great marriage, but you can always improve things,” Micha Aldon pointed out. “The tools we learned that weekend really changed our world. We have a really intimate relationship thanks to what we learned.”

The husband-and-wife team are now the North American coordinators of Worldwide Marriage Encounter who present retreat weekends in the North Texas area. Information and testimonies given during the program help participants understand that it’s a choice to love. 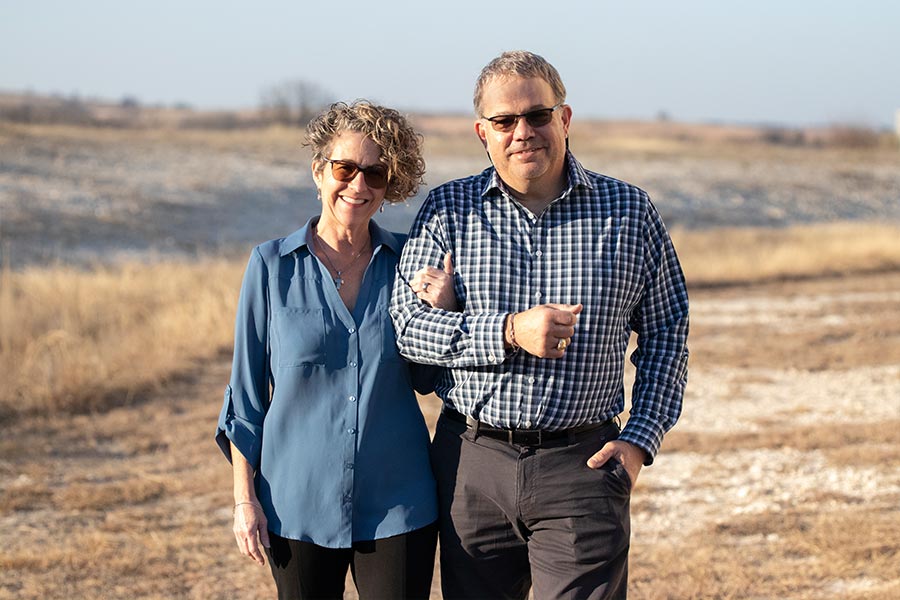 “The world teaches us that love is a spontaneous reaction — a feeling,” the veteran presenter explained. “But you can’t live your life on a spontaneous feeling. We have to choose to love in relationships.”

Based on Church teaching, Marriage Encounter instructs couples how to listen and share so they connect more deeply. Taking 10 minutes every day to write a letter to each other is one of the exercises the Aldons recommend to improve communication and togetherness.

“Then you read each other’s letter once for the head, once for the heart, and talk about it,” the Catholic convert explained. “The goal of that simple little tool is to create intimacy because you’re communicating feelings versus thoughts.”

The practice helps a relationship flourish because people become softer and gentler with one another even when faced with tough conflicts.

Empty nesters and couples looking to rekindle romance in their marriage are some of the circumstances that bring couples to Marriage Encounter. Others may be dealing with the stress of finances or raising children.

“We do hear from people with troubled marriages,” Aldon shared. “If they reach out to us and there are serious [issues], we refer them to a spinoff of Worldwide Marriage Encounter called Retrouvaille.”

The Aldons strongly endorse Marriage Encounter and, as presenters, have witnessed incredible transformations in the couples they meet.

“It’s the greatest gift we’ve ever given ourselves and our marriage,” the wife and mother said.

Getting young couples to discuss the big issues — not just the wedding day — is part of what David and Monica Knesek do as married sponsors working with their parish’s Fully Engaged program. They meet with the prospective bride and groom at least four times, sharing information about the significance of the sacrament as well as helping them explore potential areas of concern like child rearing and spending habits.

“We want them to talk about things that could be topics of disagreement in the future and could end in divorce if they’re not ironed out,” Monica said. “I believe this program encourages them to think about major differences other couples might not even broach.”

Married 30 years, they got involved in the ministry at the request of their pastor at Holy Redeemer Church. Guided by a facilitator’s manual and other materials, the Kneseks delve into Scripture readings, Catholic teachings, and the Catechism of the Catholic Church before using insights from their own union to spark a four-way conversation with engaged couples.

“We throw in things like no scorekeeping. Since we’ve been married, Monica and I have never kept tabs on who’s next to change a diaper or feed the dog,” David said. “It’s also important to encourage these couples to pursue their faith and be active in the Church. Monica and I are closer because we’ve been on ACTS retreats.”

The one piece of advice he gives all newlyweds, including his daughter on her wedding day, is “Don’t skip weekly Mass.” Hearing the Word of God and receiving the Eucharist makes you a better person and a better spouse.

“It’s a challenging time for people to get married and to do it in the Church,” David said, referring to social pressures. “It’s tough. Anything you can do to give a couple an edge is beneficial.” 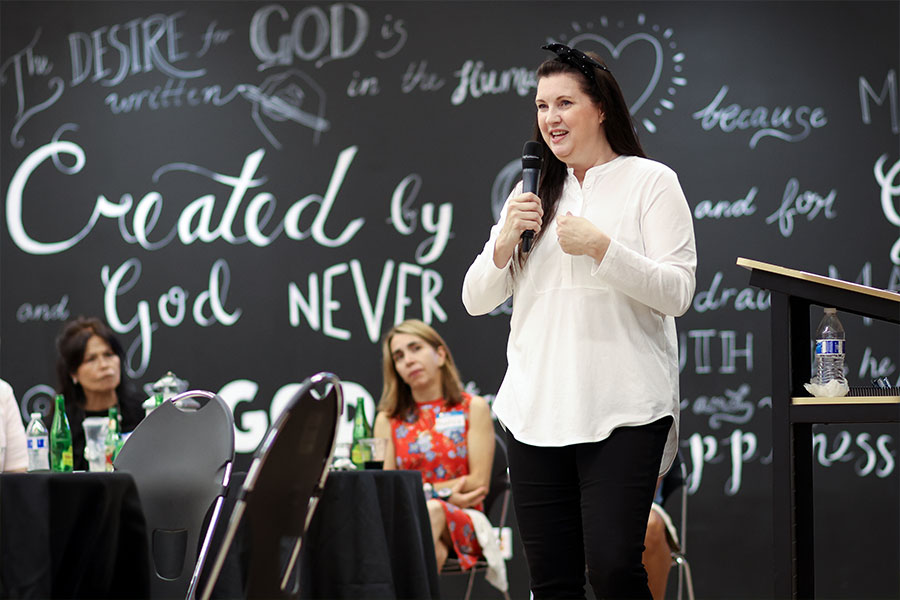 With the American divorce rate hovering around 50 percent, Dana Nygaard has no trouble finding clients.

“It was evident to me how many marriages were hurting,” said the former teacher who left the classroom after 16 years to become a licensed professional counselor and Catholic psychotherapist. Many of the calls she was getting at her new practice were from married couples, “so that became my focus.”

After earning a master’s degree in counseling from Dallas Baptist University, Nygaard became a level one trained Gottman therapist. Although a secular program, the Gottman Method of couples therapy is supported by 45 years of research, “and I infuse it with Catholic teaching,” assured the St. Elizabeth Ann Seton in Plano parishioner.

What is the one thing spouses can do to create and sustain a healthy relationship?

Dedicating time to each other, she said.

“Research backs that up,” Nygaard observed. “If a couple has a weekly date night devoted to each other, they are more likely to have an exceptional marriage and amazing benefits that come along with that. Even the heart is healthier.”

The clinician fleshes out her suggestions for a healthy, more intimate relationship in her book, 365 Dates to Renew Your Christian Marriage available in Catholic, Christian, and Spanish editions. The one rule for date night is no conversations about the kids.

Instead, Nygaard offers a “ready, set, go” list of questions couples can use to stir meaningful dialogue. Faith-based prompts are sprinkled throughout the chapters. The first date night question helps a couple focus on the evening and reconnect.

“The second question goes deeper but not so deep that you wouldn’t want to be overheard by the table next to you,” the author/speaker continued.

Privacy is required for the third, more intense exchange which may range from feelings about the relationship, childhood memories, or bucket list ideas.

“Couples come in so broken, so wounded, and by using these tools can now communicate in a healthy way,” Nygaard attested. “There are couples who have overcome affairs. They heal and move forward.”

Marriage is a journey

Sonja Lange strongly believes marriages are the foundational building block of society and the Church and are worth saving.

When a car or computer breaks down, owners do research and fix it, the advocate said, adding, “but if a marriage isn’t working, you just say you don’t love the person anymore and walk away.”

Marriage has become disposable because people don’t understand its purpose.