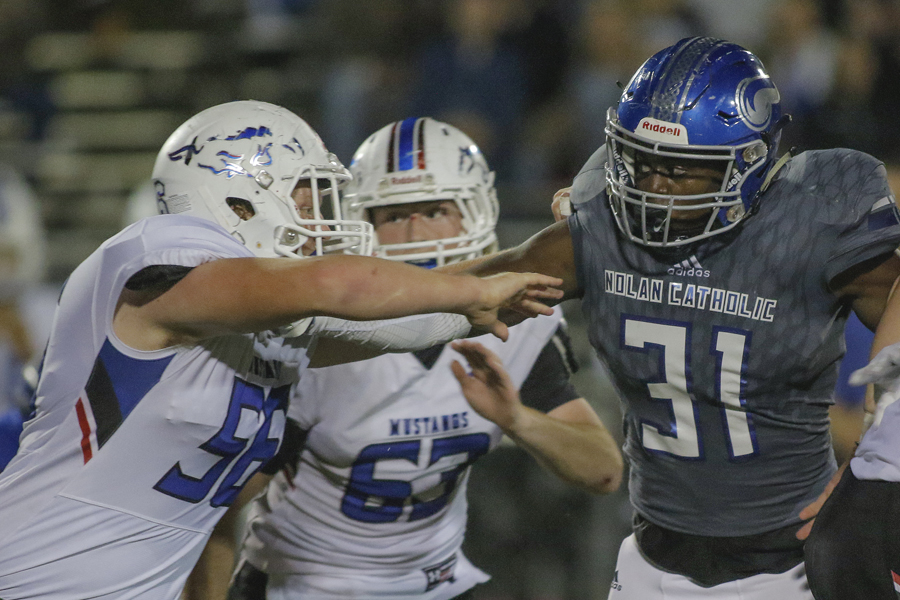 FORT WORTH — Football practice was long over. At Nolan Catholic High School, head coach David Beaudin thought he was alone. When he heard music coming from the locker room, he assumed the cleaning crew was at work. But who had stacked the chairs, swept, and mopped? NaNa Osafo-Mensah, Nolan’s star defensive end, who has racked up 27 offers to play at Division I universities.

Like Beaudin, Osafo-Mensah mistakenly assumed he was alone at the Fort Worth school. If the athlete hadn’t cranked his music, he would have accomplished his plan — to anonymously serve his team by scrubbing the locker room.

Although cleaning the facility surprised Beaudin, the gesture wasn’t out of character. Three years earlier, when Beaudin arrived on the Nolan campus for his first day, Osafo-Mensah greeted him in the parking lot and proceeded to carry boxes to the coach’s new office.

This year, the athlete was selected as a national football All-American, was named a semifinalist for the Butkus Award® honoring the nation’s top high school linebacker, and has signed to play football for the University of Notre Dame. But that’s not what makes him special, according to his coaches and teachers.

Beaudin said Osafo-Mensah is a role model, “showing that you can be the very best player on your team and still be the hardest worker, and still be one of the most caring and loving individuals. Those things don’t have to be mutually exclusive.”

The son of immigrants from Ghana, the basketball and football standout inherited his parents’ passion for education and determination to overcome obstacles.

The football team captain’s work ethic was put to the test this summer. In May, he decided to graduate a semester early from Nolan, which would enable him to enroll at Notre Dame in January and attend spring training. So, during the summer, on top of football practice, he put in an enormous amount of work to obtain enough credits to graduate in December. As usual, he earned As in his advanced academic classes.

His summer studies demonstrated his self-motivation, discipline, initiative, and time management skills, according to Brynn Lonnquist, a science teacher who taught Osafo-Mensah at Nolan and St. Andrew Catholic School. “He’s driven,” she explained. “When he sets a goal, he does his best to achieve it, even if that means being in the weight room at 5 a.m.”

Despite his academic and athletic success, Osafo-Mensah appreciates humility, a value imparted through Catholic education.

“Just because you are good at something doesn’t mean you should show it off and brag about it and try to dominate everybody. . . . You want to win and help your team out the most, but when you are off the court, use your talents to help out other people,” he said.

This fall, the football team captain did just that with fellow members of the National Honor Society. They volunteered with Miracle League in Arlington, which helps children with disabilities play baseball. The 6-foot-4-inch, 225-pound defensive end made a big impression on the children, especially a youngster and his brother who were “awestruck” to meet him, according to Nolan English teacher Donna Brown.

Brown remembered, “NaNa partnered with the little boy on the field and I could see how much it touched his heart to be with this boy. After the game, NaNa talked with the parents, posed for pictures with the boys, and even signed the little boy’s shirt for him. He really made their day, which made his day and impressed me to no end. The joy on all of their faces is not something I will soon forget — that’s who NaNa is.”

Experiences like that have helped determine the dreams of the young man. His primary goal is to play for the NFL, but he realizes he needs “backup dreams.” And studying business management in college will help him accomplish one of them — to expand the opportunities for youth with disabilities to play recreational sports.

Despite a concern about cold Indiana winters, Osafo-Mensah selected Notre Dame because it’s not just a football school, but offers “pride in academics, pride in family . . . it emphasizes everything, including being able to be a Catholic student.”

He said, “Being Catholic is always a thing I really take a lot of pride in. . . . I always knew that whatever school I go to, I could still worship my faith and still stay close to God, but I felt like since Notre Dame is a Catholic school, I could grow even stronger in my faith.”

Osafo-Mensah admitted graduating early from Nolan is bittersweet. He hopes his teammates and classmates will remember his example of “always work[ing] for what you really want. . . Nothing you want will ever come easy.