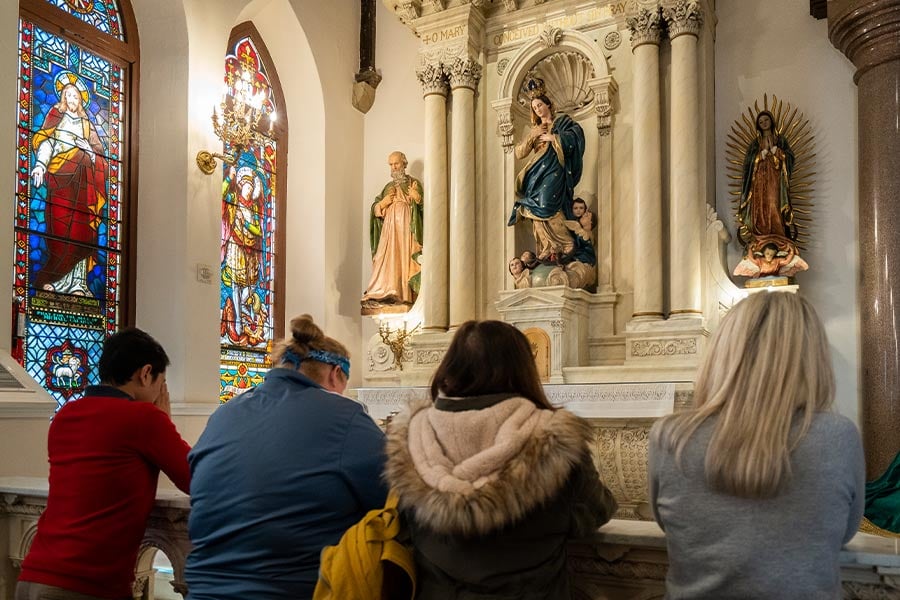 Faithful pray in front of the statue of the Immaculate Conception on March 25, 2022, the Solemnity of the Annunciation. Priests, religious sisters, and laity joined Bishop Michael Olson at St. Patrick Cathedral for Mass and praying the Act of Consecration of Russia and Ukraine. (NTC/Juan Guajardo)

FORT WORTH — From St. Patrick Cathedral in downtown Fort Worth to Rome and points all around the world, the Catholic Church united to make an Act of Consecration of Russia and Ukraine to the Immaculate Heart of Mary.

Bishop Michael Olson observed Pope Francis’ request of all Catholic bishops, priests, and laity around the world to join him in the consecration on March 25, the Solemnity of the Annunciation of the Lord — a day that honors Mary for her “yes” to becoming the Mother of God.

In his homily, Bishop Olson explained, “It is the Immaculate and purely loving Heart of Mary in her willing obedience that places her as the preeminent human advocate for every human person throughout history, especially for those who are most overlooked and ignored by the powerful of this world.” [Bishop Olson's homily can be found on his blog.]

After the celebration of Mass, the bishop led the congregation filling the cathedral in a recitation of the Act of Consecration. The prayer occurred at the approximate time that Pope Francis and bishops around the world prayed.

The prayer began with an admission of our sinfulness and our need for conversion, asking Mary to intercede so that “God’s mercy be poured out on the earth and the gentle rhythm of peace return to mark our days.”

The prayer requested Mary’s intercession in the warring nations as well as in the hearts of the faithful. The congregation prayed, “Mother of God and our Mother, to your Immaculate Heart we solemnly entrust and consecrate ourselves, the Church, and all humanity, especially Russia and Ukraine.”

Maria and Joe Ramirez, who attend St. Ann Parish in Burleson, came to the Mass and Consecration at St. Patrick to pray that “God’s will may come about in spite of us. By God’s grace and the intercession of Mary, we will make the right choices,” said Maria.

The Act of Consecration originated in Fatima, Portugal in 1917, when Mary appeared to three shepherd children with a message encouraging prayer and repentance, as well as a request for Russia’s consecration to her.

She said: “If my requests are heeded, Russia will be converted, and there will be peace; if not, she will spread her errors throughout the world, causing wars and persecutions of the Church. The good will be martyred; the Holy Father will have much to suffer; various nations will be annihilated.”

The message concluded, “In the end, my Immaculate Heart will triumph. The Holy Father will consecrate Russia to me, and she shall be converted, and a period of peace will be granted to the world.”

Since this message, Russia has been consecrated to the Immaculate Heart of Mary four times.

Jill and Paul Carolan, parishioners at St. Elizabeth Ann Seton in Keller, said the thought of “Catholics around the world, universally raising our voice in many languages” was “awe-inspiring.”

Jill said, “What’s going on in the world concerns me. Prayer is the only thing in the world that will save us, save Ukraine, and save Russia.”

As Russia's violent monthlong invasion continues to devastate Ukraine, Pope Francis led the Catholic Church as she laid the fates of both countries at the feet of Mary in the hopes that peace would finally reign.