Close to the Struggle: the Unique Witness of the Korean Martyrs 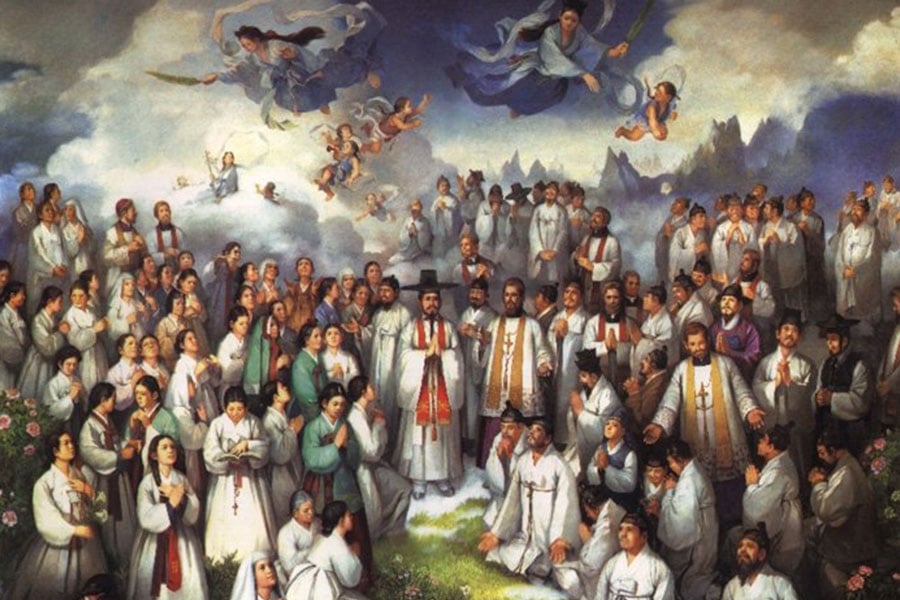 A painting depicts 103 Korean martyrs canonized by Pope John Paul II in 1984. The remains of the first three of 124 other Korean martyrs, beatified in 2014, were recently identified. (CNS photo/Courtesy Archdiocese of Seoul)

We live in privileged times, even though it may not always seem that way. Whether it be simply the ability to access reliable and clean water at any point, or the ability (very relatable to those of us in Texas at this moment), to flick a switch and relax in an artificially cooled environment, comfort is all around us.

Another way in which we are privileged, specifically as Americans, is with regard to religion and the free exercise thereof. It would perhaps behoove us all to remember that it was not that long ago when freedom of religion was far from the norm across the world.

We also live submersed in a sea of religious resources, whether we take advantage of them or not. There are Catholic newspapers, Catholic magazines, Catholic bookstores, Catholic radio programs, Catholic podcasts, and the list goes on. The proliferation of the internet has exponentially accelerated the growth of the Catholic universe. Not only that, many of us in the U.S. have several choices of which Sunday Mass to attend, in which language, and at which parish.

Now, I want you to imagine all of what I have just described going up in smoke. Not only have you gone back in time more than 200 years and lost many of those physical comforts that I alluded to, but you also have no resources for your faith other than a few translated copies of Scripture that have been smuggled to you illegally from a neighboring country. There are no priests where you live; there haven’t been for around 40 years, ever since you or the rest of your family can remember. You have never been inside a physical church. Also, some of your neighbors are giving your family furtive, suspicious glances. And worst of all, you know that those glances could ultimately prove to be you and your family’s death.

Such was the backdrop for the first Catholics of Korea. The faith didn’t reach the peninsula until the late 17th Century, and even then, in an exceedingly unconventional manner. Korea holds the fascinating distinction of being the only nation in the world to which Catholicism was spread without the initial operation and efforts of missionaries or priests. The faith found its way to the people there by word of mouth. Koreans returning from travels abroad in China spread the word about the new religion around their home country, whose state-enforced faith was Confucianism. In 1784 a young man named Yi Sünghun was sent by his fellows (who had begun meeting in secret to discuss Christianity and its implications), on a mission to Beijing in order to procure books about Christianity, as well as to make the priests stationed there aware of their presence. Sünghun’s father was sent along with a diplomatic envoy to China amongst which he was able to make the journey. Upon reaching the city, Sünghun met with a priest who gave him the books he sought along with some religious objects such as crucifixes; he also baptized him as Peter.

It wasn’t long after the newly christened Peter returned with his treasures that a secret church was organized in Seoul, the members appointing for themselves a bishop and some others as priests. After a short time however, they ceased performing their own sacraments and realized that they needed to consult a member of the official hierarchy of the church in order to validate their ministers. They contacted the bishop in the Beijing embassy, who gave his word that he would send them a priest with haste. As it happened, before that time would come, the many trials of the newborn church in Korea were to begin. The first martyr was Thomas Kim, at whose house a group of Christians were found to be praying. Before the close of the 18th century, there had already been nearly 10 martyrdoms. There were to be thousands more.

The first priest sent by Bishop Alexandre de Gouvea failed to enter Korea and died shortly thereafter. At last, one priest named Father Zhou made it into the country and was able to celebrate the Mass of Easter in 1795. Unfortunately, Father Zhou would himself be martyred not long after. It was not until the year 1836 when, after waiting for what must have seemed an interminable amount of time, and after communicating once more with Bishop de Gouvea in Beijing, that two French priests, Father Maubant and Father Chastan, secretly crossed the frozen Yalu River into Korea. There was also at long last to be a bishop for the Korean church: Laurent Imbert. All would eventually be martyred by beheading.

Korea would not get its first native-born priest until the ordination of the future Saint Andrew Kim Taegon. Both of Andrew’s parents were Christians. When he was only 15 years old, Andrew’s father was executed for his faith. During his youth, one that by necessity must have resembled that of many other children of Christian families in Korea during this time, he was inspired to become a priest by the courage of those who had already been martyred. The nearest seminary was located in Macao, around 1,300 miles away. Nevertheless, Andrew was determined to answer the call God had given him and, on August 17, 1845, he was ordained into the priesthood. After reentering Korea by ship on October 12 of that same year, he was charged by the newly consecrated Bishop Ferréol to find a practicable way to continue leaving and reentering Korea by sea. While investigating a group of islands off the West coast for possibilities, Andrew was arrested by police and subsequently taken to Seoul and imprisoned, as so many of his brothers and sisters in faith had been before him, both in Korea and in other nations he could not have known of at the time. The prison cell is a familiar habitation for Christians. On September 16, 1846, Saint Andrew Kim Taegon was beheaded. He was only 25 years old.

Reading of the lives and struggles of these first Christians in Korea one feels a singular mixture of awe, sorrow, gratitude, and perhaps even a certain amount of guilt with respect towards how comparatively easy our situation is today. As I mentioned before, we live in an age where it is, frankly, quite easy to slide into complacency with our faith. The Korean Martyrs had no such opportunity, and it would do us well to hold that in mind.

During his imprisonment, Saint Andrew Kim Taegon wrote a final letter to his companions, the last line of which reads: “Since we are now close to the struggle, I pray you walk in faith, so that when you have finally entered into heaven, we may greet one another.” We might all ask for such perseverance and serenity before the faces of our adversaries, in whatever form they may appear to us, knowing that the worst they could do would but carry us to God.