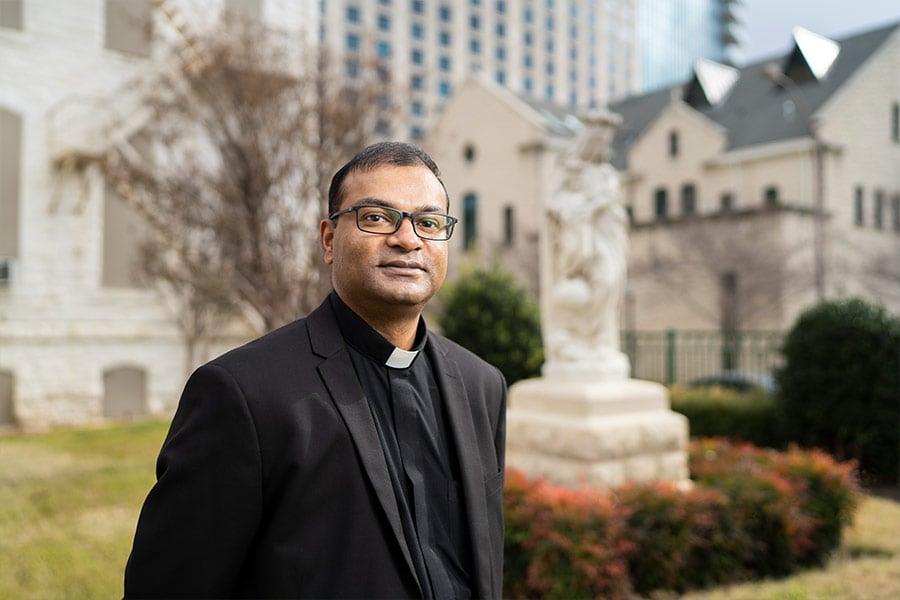 Father Binoy Kurian, TOR, outside of St. Patrick Cathedral on Jan. 19, 2022. Fr. Kurian is the new hospital chaplain for the Diocese of Fort Worth. Currently, he visits patients at five Fort Worth hospitals. (NTC/Juan Guajardo)

FORT WORTH  — At age 16, while growing up in the southernmost Indian state of Kerala, Binoy Kurian clearly heard God’s call to the priesthood. A dedicated altar server for much of his young life, inspired by his local parish priests, the teenager welcomed whatever role was in store for him to serve Christ’s Church going forward. He didn’t realize, however, that this higher calling would eventually take him to the other side of world, 10,000 miles away from home, to serve Catholics in Fort Worth, Texas.

“I never expected that I would end up in the U.S.,” the priest said.

“It’s part of being a Franciscan missionary. You can be anywhere at any time. You only need to be available to the calling.”

“I am merely an agent in administering the sacraments in my work here,” Fr. Kurian said. “Christ is present, and the Holy Spirit is at work. There is no doubt about that.”

In his first full month as the diocese’s hospital chaplain — a new priestly role for him — Fr. Kurian responded diligently to 78 hospital calls, and that pace continues today.

Fr. Kurian said most of the calls he receives from hospitals, via an around-the-clock diocesan call center, are requests for Anointing of the Sick.

In his early work in Fort Worth and in hospital ministry in particular, Fr. Kurian said he has found “the effects of the sacraments are often very immediate. That is how faith works.”

Fr. Kurian cited one example involving a man who was in one of the local hospitals facing serious heart surgery.

“The man, and his wife and son who were there with him, prepared for the worst,” the priest said. Responding to a call to visit the patient and administer the Anointing of the Sick, Fr. Kurian arrived to find the individual “very discouraged.”

“I held his hand and tried to comfort him. I said, ‘You are a faithful Catholic and we have sacraments that can help you,’” Fr. Kurian recalled.

After the sacrament was administered and the priest prayed with the family, the man grew quiet, perhaps in an introspective state of mind. The priest reached for his stole and prepared to leave quietly. Suddenly, the patient reached out again for Fr. Kurian’s hand, holding it firmly, and exclaimed, “I will live, Father! I will live!”

The priest explained that the man had accepted whatever God had planned for him, whether it was continued life on earth or life after death with Christ.

“It was just so immediate,” Fr. Kurian recalled. “The Holy Spirit was at work.”

The priest has also found importance in responding immediately to the needs of patients in dire cases. In one of his first duties here, the priest received a call at 5:45 a.m. on a cold December day. It was not an emergency call, but one from a hospital requesting a visit sometime that day to a seriously ill patient and his family.

“I anointed the man and prayed with his family. I assured them I would keep him in my prayers.”

At 7:15 a.m., one of the hospital nurses informed Fr. Kurian that the man had passed away and his family was thankful for his timely and very important visit.

Fr. Kurian stressed, “Anointing of the Sick is not a farewell ceremony. It is a sacrament, a healing; a healing for the soul.”

In addition to the sacraments of Anointing of the Sick, Reconciliation, and the Eucharist that Fr. Kurian administers as a priest and hospital chaplain, is the sacrament of Baptism. This is especially important for cases in which parents seek the sacrament for a hospitalized baby who has not yet been baptized.

Fr. Kurian reiterated that one of the most important responsibilities of his work involves being available to the faithful at any time. Inspiration to successfully carry out that task comes from St. Francis, he said.

“From St. Francis we learn about humility, understanding, selfless giving, and commitment to others,” the priest said. “And being available for God’s people in these ways is what I take from St. Francis, spiritually, to carry out this ministry.”

Fr. Kurian comes from a background of 16 years as a principal for Catholic schools in India and as a financial director for the St. Louis Province of his religious order in Bengaluru, India. Although different from his present ministry, the experience has taught the priest that God’s calling for him can include diverse tasks.

In addition to serving as hospital chaplain, he celebrates Mass several times each week at St. Patrick Cathedral in Fort Worth and is involved in many other pastoral duties including hearing confessions. “I am happy to be of service at the cathedral and for the pastoral experience,” the priest said.

Fr. Kurian welcomes his new role in hospital ministry with open arms. He sees it as another assignment from God.

“Many people are in the hospital, not knowing what tomorrow holds. They may be having moments of realization that they need to reconcile with the Lord.

“I need to be responsible in answering their spiritual desires on their journey. Their souls may be yearning for forgiveness from the Lord. God wants me to be there for them right now. This is a call from God.”