Dante’s Indiana, a novel ride through heaven and hell 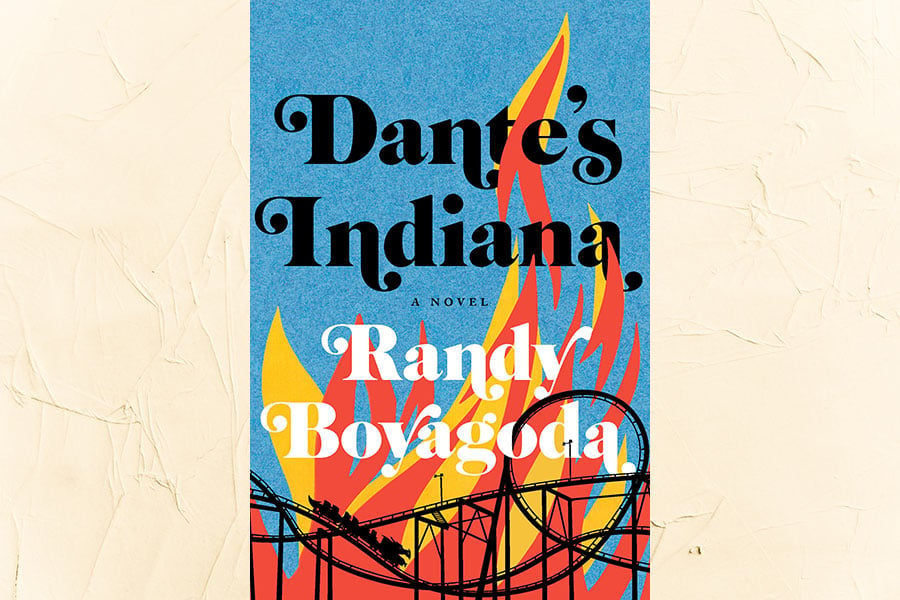 The cover of Dante's Indiana.

When we meet the protagonist of Dante’s Indiana, he’s literally a wreck. Prin has just crashed his bicycle and lies alone in central Toronto as the rest of the city passes by, a few giving a wave to ensure he’s not injured.

The rest of his life is a wreck, too. Like the Biblical Job, almost everything of significance – his health, home, family, and career – has been taken from him to some degree.

In Original Prin, Randy Boyagoda’s previous novel featuring Prin Umbiligoda, he received a prostate cancer diagnosis, and the subsequent surgery may have left him impotent.

In Boyagoda’s most recent novel, Dante’s Indiana, Prin’s home has been leveled in advance of a rebuild. His semi-estranged wife and four daughters are staying with her sister in Milwaukee indefinitely. His career as a college English professor has devolved into giving an occasional talk to the lifelong learners at the residential senior center that replaced the struggling Catholic university where he previously taught.

After a close encounter with death at the end of the previous novel, Prin stumbles through a purgatory of sorts in Dante’s Indiana, and this is where the fun starts.

Prin thinks he can rebuild his relationship with his wife by surprising her with a swimming pool when the new home is complete. To earn enough for the expense, he moves to a small city in Indiana to become a consultant for an evangelical millionaire who dreams of turning two abandoned basketball arenas into a theme park based on Dante’s epic poem, The Divine Comedy.

One arena is Inferno, the second is Paradiso. “What about purgatory?” asks Prin. His boss replies, “Fair ball. Look, there were only two vacant arenas, and, well, everybody gets heaven and hell….”

Prin is charged with concocting amusement park attractions to fit the theme, with enough educational value to qualify for tax breaks. A potential investor describes the project, “They’re going to put fun back into the fear of God.”

Full of memorable characters and as fast-paced as the roller coaster that will be the main ride of hell, the novel reads like a movie script. The plot journeys quickly through highs of Christmas musicals and matchmaking by extravagant cooking, then plunges into lows such as opioid addiction, racism, and the police shooting of an unarmed teen.

Even when the plot descends into dark topics, Boyagoda’s eye for wit keeps the novel lighthearted. Some of the humor is dry and subtle, such as the difficulty to recruit talent for heaven as opposed to the hordes who apply for “minimum-wage jobs in hell.” Long meetings drag on in a Paradiso conference room. Academicians won’t admit Prin into a room, but when he shows up with food, the door opens.

At other times, the humor is enjoyably silly, as in his description of one of the acts recruited to entertain the crowds in heaven:

“Noah’s Barks were a family of Alabama dog stylists. To stormy orchestral music and oohs and aahs from the crowd, the groomers used clippers and hair dye and stick-on eyeballs to transform six standard poodles into six pairs of Biblical animals, and then, to wild applause and flashing phones, the dogs walked two-by-two into a kennel tricked out as a little ark.”

Sometimes absurd, sometimes witty, the humor of Dante’s Inferno is always thoughtful, never hurtful, and often satirical. With just a few words, Boyagoda skewers politicians, evangelical entertainers, protesters, unethical businessmen, and other topics and famous individuals in our current culture (keep an eye out for Steve Bannon and Beto O’Rourke).

Like his main character, Boyagoda is a Sri Lankan Canadian, a literature professor, and a practicing Catholic. The reader sees how Prin’s faith is integrated into his life as he prays, attends Mass, and reaches out to God in his struggle to reconnect with his family and reassemble his normal life.

Themes of one’s relationship to God, the importance of family, and, of course, heaven and hell run throughout the book.

This year marks the 700th anniversary of Dante’s death. In an interview with the publisher, Boyagoda said Dante’s The Divine Comedy “perpetually surprises, challenges, and moves me, So I will continue to read it for those very reasons.”

In the book’s acknowledgement, the author encourages readers of Dante’s Indiana to read a few lines of The Divine Comedy each day, because Dante inspires and calls us “to keep close the hopeful knowledge that on the far side of this life await brighter possibilities.”

Likewise, as Prin makes his path through the twists and turns of this novel, he never gives up hope that heaven awaits on the other side of purgatory.