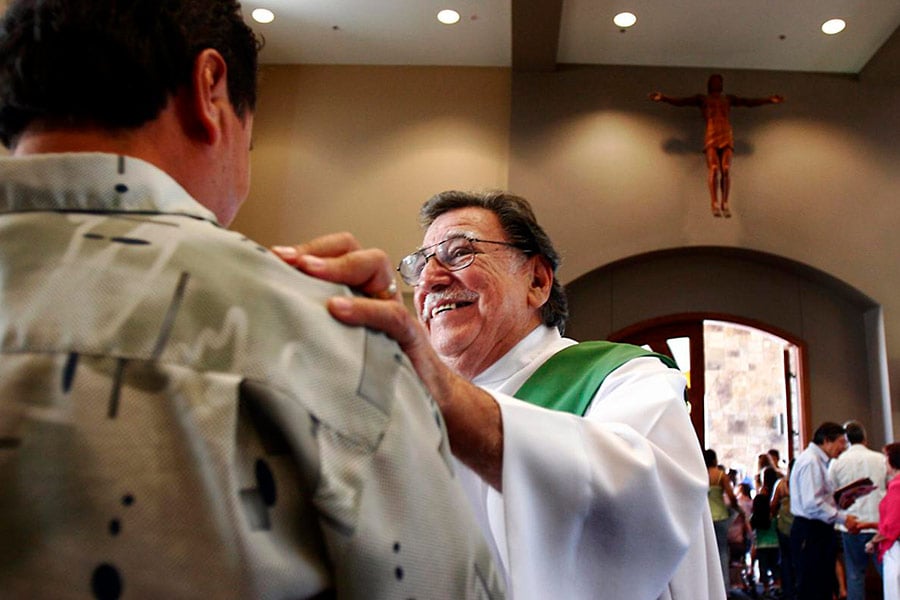 DENTON — When Emilio Gonzalez Jr. thinks about his father, he recalls a cold, winter afternoon and an elderly woman who had no heat in her home.

“My father unplugged the gas heater in our living room and we took it over to her,” explained the Desert Storm veteran who was a teenager at the time. “Then we hooked it up and spent several hours with her until the house warmed up.”

The experience stayed with Gonzalez Jr. Years later, he realized the gesture meant more than just providing a needed utility to someone. Spending time with the impoverished homeowner was the real gift.

“When you give money, you can always get more money,” Gonzalez Jr. reasoned. “But, when you give your time, you’ve given everything because you can’t get that time back.”

Making a difference by giving all of yourself was the example Emilio Lopez “Popo” Gonzalez, set for his son and others. The longtime Denton humanitarian and Diocese of Fort Worth deacon died November 26. He was 84.

Born in Robstown, Texas, Deacon Gonzalez served in the U.S. Army during the Korean War. He and his wife of 60 years, Guadalupe “Lupe” Elizondo, moved to Denton in 1964 where they owned and operated Popo Y Lupe Hair Styling for 40 years.

The moniker “Popo” was given to him by a younger sister who couldn’t pronounce Emilio, “and in South Texas, when you get a nickname, it just sticks,” said Gonzalez Jr., the youngest of the couple’s three children.

After the death of his father, Gumecindo Gonzalez, Popo, then three-years-old, grew up in abject poverty and was expelled in the ninth grade for speaking Spanish. But hardship and discrimination did not embitter the high school dropout who would later have the Popo and Lupe School for Young Children in Denton named after him.

With help from other community leaders, Popo Gonzalez founded “Familias Unidas” in the early 1970s to advance the educational needs and support for Mexican-American families in the area. The group later became Denton’s League of United Latin American Citizens (LULAC) Council #4366 with Gonzalez serving as president in 1991 and 1992. The deceased also was involved in numerous other civic and youth organizations.

In 1991, he began formation to become a permanent deacon for the Diocese of Fort Worth and was ordained by the late Bishop Joseph P. Delaney in August 1995. Prior to becoming a deacon, the Immaculate Conception parishioner worked tirelessly to make the Church more welcoming to Spanish speakers.

“He advocated very strongly for the Spanish speaking and helped get the Spanish Mass started here at Immaculate Conception,” said the church’s pastor, Father Tim Thompson. “At the same time, people loved him in the English-speaking community. He went to the jail on a regular basis and the Denton State School to have services for the patients who were there.”

A frequent visitor to Denton’s day-laborer site, the deacon spoke with the underemployed about any mistreatment they experienced and used the opportunity to evangelize and offer help.

Profiled in 2008 by the Denton Record-Chronicle, the advocate for the struggling poor was asked how religion changed his life.

“As I tried to follow the Gospel, I became a better husband, father, friend, and citizen,” he responded. “It helped me to be thankful for blessings bestowed on me and aware of the needs of the marginalized.”

Nominated by the late Monsignor Charles King, Deacon Gonzalez was recognized by Pope Benedict XVI for distinguished service to the Church with the Benemerenti Medal in 2012. When he retired from active service in 2015, hundreds turned out to honor him.

“There was a huge celebration at the parish,” Fr. Thompson remembered. “He was always really loved by people.”

Dr. Isabella Pino-Hinojosa met Popo Gonzalez when she was a student at North Texas State University and he recruited her to play the guitar at Immaculate Conception’s bilingual monthly Mass. She described her longtime friend as a man who worked hard but didn’t have a concern for wealth or money.

“He saw no race, no color, no creed. He just wanted to help,” she said. “He was a man of faith — a servant leader who stood up for the human rights of everyone — the elderly, poor, Latino, youth, and the incarcerated.”

In lieu of flowers, the family suggests donations to the Monsignor King Outreach Center, the Health and Public Service Joyce Ann Brown and Popo Gonzalez Scholarship at the University of North Texas, or the Immaculate Conception Parish youth ministry.

DENTON — When Emilio Gonzalez Jr. thinks about his father, he recalls a cold, winter afternoon and an elderly woman who had no heat in her home., trending-english