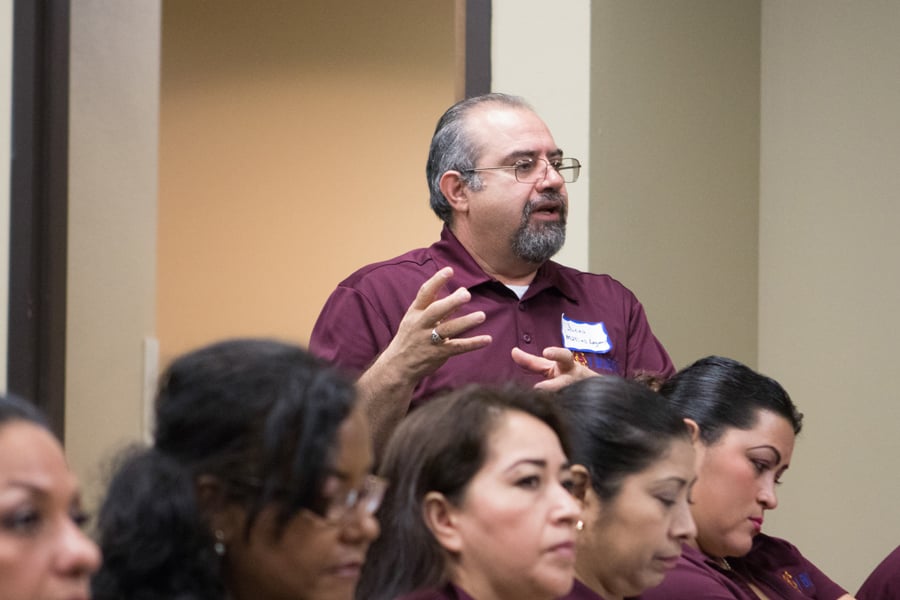 FORT WORTH — Bishop Michael Olson has a vision of a bilingual clergy in the Diocese of Fort Worth. The ability to celebrate the sacraments in Spanish, one of the predominant languages of the diocese, will open doors for the clergy to better serve the Church. To bring this vision to life, Juan Rendon, Director of Diaconal Formation for the Diocese of Fort Worth, has introduced pastoral Spanish classes for the diaconate candidates this year.

“The bishop wants the candidates to take basic pastoral Spanish so they have the basic vocabulary and are able to concelebrate the sacraments in Spanish,” said Rendon.

Rendon sees the importance of the Bishop’s vision and believes it is attainable, as around 50 percent of the deaconate candidates are bilingual.

He has high hopes for the classes and feels they will positively affect how the candidates will be able to interact with Spanish speakers. Being unable to communicate or even pray with the people they serve is discouraging to some candidates.

“That’s the major challenge. They feel extremely inadequate when they cannot communicate or even pray with them in Spanish. But I hope they get a greater sense of security so they can recite the Spanish prayers with them or even lead a spontaneous prayer in Spanish,” said Rendon.

He plans to continue the classes and make them mandatory for future diaconate candidate classes.

“We have these first two sessions and then we will decide what’s next,” said Rendon. He has dates planned for the Spanish classes every semester until 2020. “We want to have something that is systematic all across the formation. For candidates, this is something that we will have every year. I hope to do this at the end of every year with the class of 2022.”

Rendon said that everyone can benefit from the classes, even current deacons. They see the need to be able to communicate in basic Spanish. Without these classes, they feel powerless. “They are fixers, they are doers, so they want to do things and they just feel powerless that they cannot communicate,” said Rendon. The deacons currently depend on translators but hope to be able to pray with those they serve in their native language.

The positive reaction to the class’s creation has given Rendon hopes for future classes on different languages. “I see in the near future that we will also provide something in Vietnamese, maybe not so much learning the language, possibly basic prayers in Vietnamese.”

The first two sessions are being offered at Saint Elizabeth Ann Seton Parish on June 9 and June 23 for both diaconate candidates and current deacons. Future classes will be held at the Catholic Center.