Does faith get a yellow card at the FIFA World Cup? 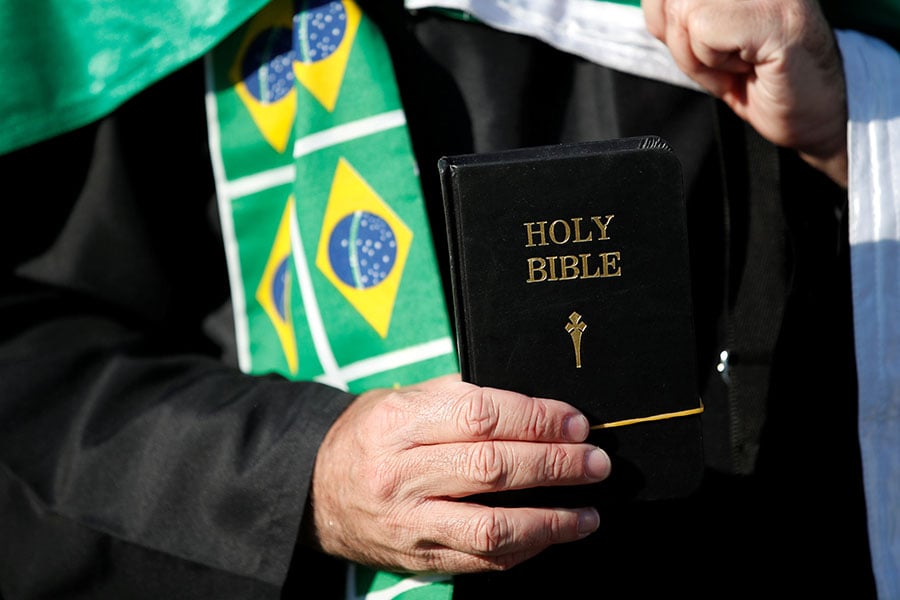 A Brazil fan in Moscow holds a Bible before a World Cup match against Serbia June 27. (CNS photo/Carl Recine, Reuters)

Washington D.C. (CNA) — As a passionate soccer fan, Jennifer Bryson has been faithfully watching every game she can during the 2018 FIFA World Cup. But as a religious freedom expert, she’s found herself wondering how, and why, soccer authorities regulate the many religious expressions on display in the international soccer tournament.

“Sport is so relevant to religious freedom because it offers a shared civic space where people from diverse traditions come together and compete towards a common goal," said Bryson, who is the director of the Religious Freedom Institute’s Islam and Religious Freedom Action Team.

Bryson watches for the moments when an athlete visibly prays in gratitude after a goal or makes the sign of the cross while coming onto the field, noting how the referees react to these religious expressions.

Between social media and worldwide television broadcasts, faith has been widely on display in this year’s World Cup in Russia. The Tunisian soccer team recited the Quran together in the team room, and Mexico’s soccer team celebrated Mass before their unexpected victory against Germany. A Nigerian athlete celebrated a win by waving his rosary. Egypt’s Mohamed Salah prostrated himself in prayer after scoring against Russia.  A Catholic and an evangelical from opposing teams knelt down next to each other to pray after the Belgium-Panama match. Even the 2018 World Cup logo was inspired by the Russian tradition of icon painting, according to the FIFA website.

But in soccer’s recent history there have been several controversies over “demonstrative prayers” on the field.

Israeli soccer player Itay Shechter received a yellow card after he knelt on the field and prayed with a Jewish kippah after scoring a goal at UEFA Champions League game in Austria in 2010.

"For a Jewish player to get penalized for visible prayer in Austria was extra-controversial," explained Bryson.

To defend Shechter’s right to pray, his coach, Eli Guttman said, “When a Christian player crosses himself after a goal, that’s also fine with me.”

In Scotland, lawmakers in 2003 proposed banning players from making the sign of the cross in a “provocative” way on a soccer field due to the religious divide of local teams among Protestant and Catholic soccer fans.

The Catholic Church opposed that proposal, saying legislation banning the sign of the cross would be as ridiculous as banning a Muslim from using a prayer mat, Bryson pointed out.

Bryson said that she has been encouraged by efforts to defend religious liberty in athletic contexts.

"Your own religious freedom is most protected when your neighbor of another faith also has religious freedom,” she said at “Exorcisms and Exercise, Crosses and Cross Passes,” a June 20 event sponsored by the Religious Freedom Institute event.

In some instances, soccer players have been excluded from play on the basis of their religion.

The Iranian women’s soccer team withdrew from a 2011 Olympic qualifying match because the referee would not allow players wearing an Islamic hijab head covering to participate.

The NGO Coptic Solidarity submitted an official complaint to FIFA in June documenting the “widespread discrimination” against Coptic Christian soccer players that included 25 specific cases. There were no Copts included on Egypt’s 2018 World Cup team.

In June 2017, soccer star Jaelene Hinkle withdrew from the United States’ national squad because she was uncomfortable wearing a “pride” jersey during the team’s LGBT Pride Month rainbow jersey initiative. She was since booed and jeered during a game in Portland, Ore., by fans waving rainbow flags.

The Football Association of Ireland (FAI) required players to wear a special Pride Month jersey with rainbow numbers during international play in June 2018. The FAI tweeted, “Not just a number, this is a statement. Ireland, supporting LGBT rights.”

In June, FIFA announced that the 2026 World Cup will be hosted in North America, with games held in the United States, Mexico, and Canada.

Bryson says that she is hopeful that the 2026 games will be a truly global, welcoming games for both the fans and the teams are allowed to “come as they are.”