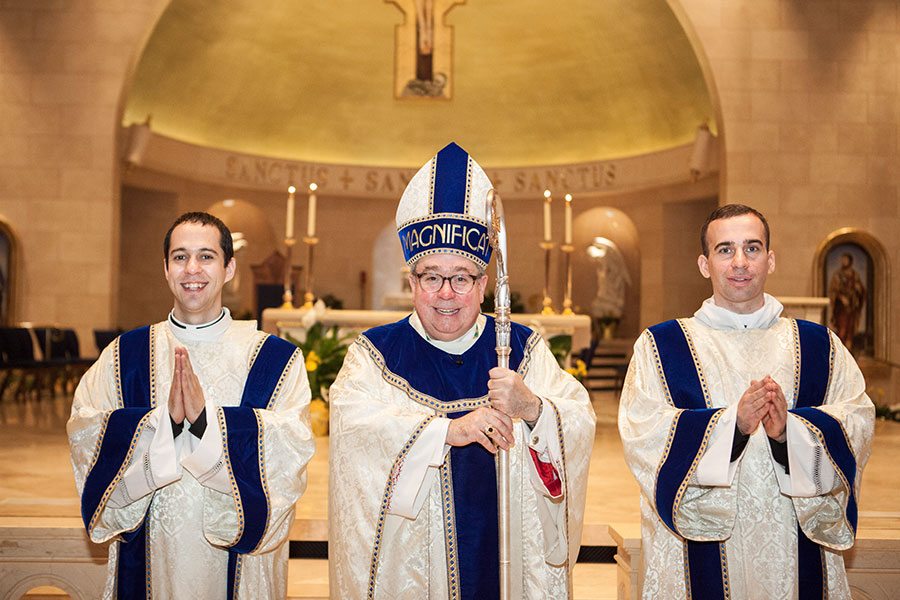 Deacons Jonathan Demma and Maurice Moon after being ordained as transitional deacons on April 29, 2017. They will be ordained to the priesthood on May 19. (NTC photo/Juan Guajardo)

Washington D.C. (CNA/EWTN News) — A strong majority of the 430 men who are about to be ordained to the Catholic priesthood in the United States come from families where both parents were Catholic, and had several friends encouraging them in their vocation.

The findings were from the annual survey of new ordinands by CARA, the Center for Applied Research in the Apostolate out of Georgetown University. Out of the 430 men to be ordained to the priesthood, 334 responded to the survey, including 252 ordinands to the diocesan priesthood and 78 ordinands to the religious priesthood.

While this year’s priesthood ordination class is slightly smaller than last year’s class of 590, the United States Conference of Catholic Bishops (USCCB) said the report provides “reasons for hope and areas for growth.”

"Although the overall number of ordinations to the Priesthood is lower this year, the information gathered from this survey and the generosity of those to be ordained continues to inform the important work of vocations ministry for the future,” Cardinal Joseph Tobin of Newark, Chairman of the U.S. bishops' Committee on Clergy, Consecrated Life and Vocations, said in a statement.

“It is essential that we continue to make the conscious effort to encourage young men to be open to hearing God's call in their life and assist them in the discernment process."

Encouragement from priests, parishioners and friends was a key factor in considering the priesthood for many of this year’s ordination class.

Father Ralph O'Donnell, Executive Director of the Secretariat for the USCCB, said that this was “one of the most encouraging statistics” from the report and that it should be a call to all the faithful to encourage vocations.

“This fact should enliven in the faithful a resolve to actively encourage the young people that they encounter to consider to what vocation God is calling them and to be generous in their response," he said in a statement.

The survey also found that most of the men being ordained this year were baptized Catholic as infants (90 percent) and that most also grew up in families where both parents were Catholic (83 percent). Slightly more than one-third of the respondents are also related to priests, the survey found.

This year’s class also included slightly more respondents who were born in the United States. In previous years, the average amount of foreign-born ordinands was around 30 percent, while only 25 percent of the 2018 ordination class is foreign-born. Of that 25 percent, the majority come from Mexico, Vietnam, the Philippines, and Colombia.

Also included in the report were the ordinands’ answers to the prompt: “People might be surprised to know…”

Edgar Elamparo, of the Diocese of San Jose, responded with a story about going off to seminary.

“Before my family sent me off to the seminary, I saw my uncle in front of our house with tears in his eyes. I said, ‘Why are you crying?’ He replied, ‘When you were young, I asked you what would you want to become when you grow up? and you said, I want to become a priest, and now here, you are on your way to your dream.’”

Brett Garland of the Diocese of Columbus said he “preached at my twin brother's wedding just two months after I was ordained a deacon, and I will be the celebrant of my older brother's wedding this summer, just a month after I am ordained a priest.  By living out their particular vocations, both of my brothers have encouraged me in my own vocation.”

This year’s survey was conducted between Jan. 29 - March 11 via email. The findings of the annual CARA survey are sent to the USCCB’s Secretariat for Clergy, Consecrated Life and Vocations.