He refreshes my soul. He guides me along right paths for the sake of his name.
— Psalm 23:3

For adventurous Catholics seeking to experience the grandeur of God and to follow a spiritual path that literally winds its way deep into the heart of Texas, such a journey begins in San Antonio.

Only about a four-hour drive from Fort Worth, the city named for St. Anthony of Padua is home to some of the oldest standing churches in Texas. From 1718 to 1731, Spanish Franciscans established a chain of five missions along the San Antonio River.

The first was San Antonio de Valero — now known as the Alamo — in 1718, followed by Mission San José in 1720. Mission Concepción, Mission San Juan Capistrano, and Mission Espada were relocated from East Texas and re-established along the San Antonio River by 1731.

My wife, Joan, and I decided to combine our love for the Catholic Church, history, and bicycling by pedaling our way along the mission trail for our 40th wedding anniversary in September. While we had biked the trail several years before on rented “B-cycles” that were part of the city’s bike-share program, we found those to be heavy and not ideal for the trail, which at the time was still incomplete.

This time around, on a completed, well-maintained mission trail, we took our own bicycles and stretched our original 20-mile round trip to 30 miles.

We started our journey near the headwaters of the San Antonio River, about five miles north of downtown.

At around noon on September 17, on a humid 90-degree-plus day, I parked my truck on a side road near the Witte Museum. My wife and I unloaded our bicycles and prepared for the journey with all the necessary accessories — bright flashing taillights to keep us visible in busy downtown San Antonio traffic, maps and navigation devices to give us a basic knowledge of our whereabouts, cell phones, a camera, and plenty of water. Experience from our earlier trek taught us that drinking water was not often available along the route, especially on remote stretches at the southern end of the mission trail.

From the headwaters to downtown San Antonio, the trail was paved, but quite narrow. In many instances, in order to yield to runners, walkers, and motorized scooter traffic approaching from the opposite direction, we had to stop and let others pass first. The challenges of riding in such tight quarters were rewarded with views of the ever-widening river and the newer “Museum Reach” section of the San Antonio River Walk. Along the route were two lock chambers, where downtown river barges are raised and lowered nine feet to navigate through the area.

Then it was on to the busy streets of downtown San Antonio as we circumnavigated the popular city-center portion of the River Walk. 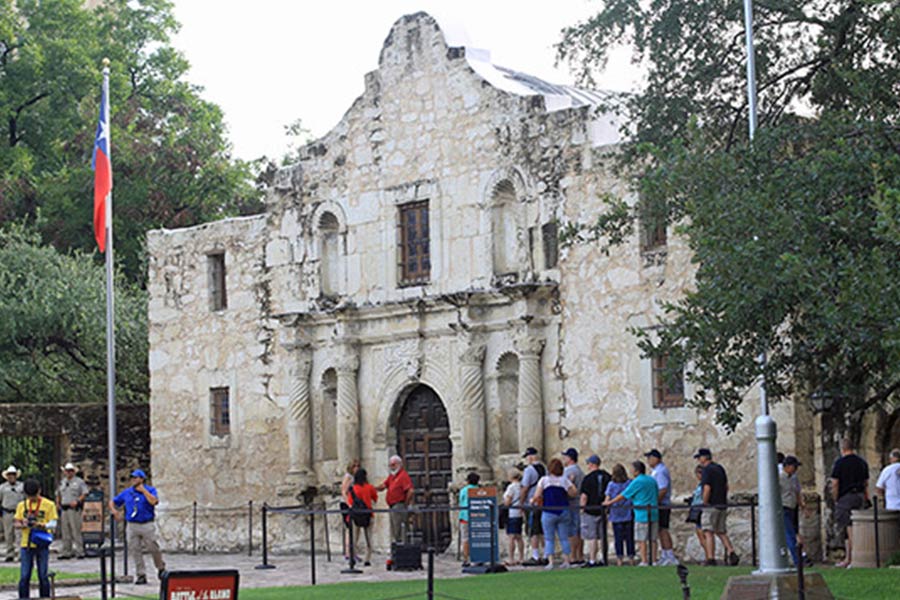 The northernmost of the five missions of San Antonio is, by far, its most well known.

The popularity of this site is due to the fact that one of the most celebrated military battles in Texas history took place here. Defended to the death by Texas heroes such as Davy Crockett, Jim Bowie, and William Barret Travis — all in the interest of securing Texas independence from Mexico — the Alamo is central to understanding the history of the Lone Star State.

The history of the mission here, however, predates the 1836 Battle of the Alamo. Before it was known by its current name, the Alamo was known as Mission San Antonio de Valero, named by Franciscans who founded it in 1718.

A national historic landmark, the Alamo is at the downtown city center of San Antonio and is embedded deep in the heart of patriotic Texans.

There are no Masses celebrated here, the mission’s Catholic heritage relegated, for now, mostly to history books. The first stone church at the mission was built in 1744 but collapsed in 1756. The iconic symbol we recognize as the main Alamo structure today was actually the Catholic chapel started in 1758 but never completed. Many people may not realize it, but the structure is cruciform in shape.

Our bicycle journey took us near the Alamo, but we had decided to spend more time there the previous day.

Instead, we biked directly to San Fernando Cathedral. Although it is not a mission, the cathedral, founded in 1731, has long been the central church of the Archdiocese of San Antonio. It is the oldest standing church building in Texas.

Alamo defender Jim Bowie was married here and Mexican General Santa Anna used the church as a lookout during the siege of Bexar. A tomb in the church is said to contain the remains of the Alamo heroes.

When visiting the missions of San Antonio, the nearby San Fernando Cathedral is a must-see. Daily Masses are offered in both English and Spanish. The cathedral contains a statue of St. John Paul II, who prayed here in 1987. A relic of the pope who became a saint is contained in the base that holds his statue.

Located on the original central square for the villa of San Fernando de Béxar — the original name for San Antonio — the cathedral was designed from the start to be the focal point and spiritual center for the settlement.

From the cathedral, we traveled several blocks and finally reached the start of the hike-and-bike section of the mission trail. Once we hit that section, we got up to speed on smooth pavement and enjoyed the site of the river, open fields, and dense tree-lined areas along the way.

The first mission portal we reached was the Mission Concepción, named for Our Lady of the Immaculate Conception. This mission was established in 1731 following relocation from East Texas. The church was under construction for about 15 years. Today, it looks practically the same as it did when it was completed in 1755. According to the National Park Service, Mission Concepción is the oldest unrestored stone church in America.

Interestingly, beams of sunlight from west-facing windows simultaneously illuminate the face on a painting of the Virgin Mary and a central spot on the altar floor. The event happens at 6:30 p.m. during the annual August 15 Feast of the Assumption of the Blessed Virgin Mary.

Known as a double solar illumination, the annual occurrence continues to this day to serve as a dramatic commemoration of Mary’s bodily ascension into Heaven.

This well-preserved house of worship is one of the oldest continuously operated churches in America.

The sight of Mission Concepción during our ride was a most welcome one, after having traversed busy metropolitan areas of San Antonio. Mission Concepción, standing quietly in the countryside, far from the hustle and bustle of the city center, gave us the first glimpse of the mission complexes containing inspirational houses of God designed to bring Christ to the native people of Texas.

The greater missions were established by the Franciscan missionaries to build Christian settlements for Native Americans where they could learn trades and assimilate into the Spanish community. An eventual goal was for these mission communities to become secularized — incorporated into Spanish colonial society.

Eager to see the other missions and pace ourselves, we continued our journey south along the San Antonio River.

When we arrived at Mission San José, we realized why it is known as the “Queen of the Missions.” It is the largest of the missions, according to the National Park Service. At this site, visitors can begin to understand that the missions constituted much more than church structures. They were communities revolving around the Catholic Church.

After a long walk inside the expansive mission grounds, surrounded by solid stone walls, we gained an interesting perspective of the church, bastions, granary, and living quarters. Native Americans learned to sustain themselves by raising livestock and growing agricultural crops in fields and pastures surrounding the mission.

Mission San José was founded in 1720 but was moved two times to its present location. The cornerstone for the current church was placed in 1758, with final completion of the structure in 1782.

Of special note is what is known as “The Rose Window” on the south wall of the church sacristy. Considered one of the finest examples of Baroque architecture in North America, the frame of the window was sculpted around 1775. The Blessed Sacrament was displayed in the window during the Feast of Pentecost, according to parish history accounts.

Ready to ride, we mounted up and continued our journey.

Originally established in East Texas in 1716, the mission was moved to its present location on the east bank of the San Antonio River in 1731. Construction on at least three different church structures occurred between the 1750s and 1786, according to the San Antonio Missions World Heritage Office.

This mission once housed more than 200 Native Americans and included a granary as well as textile and carpenter shops. Outside the stone walls, inhabitants cultivated fruit orchards and vegetable crops. They also raised cattle.

To carry out successful farming operations at the missions, Franciscan missionaries, Spanish colonial settlers, and Native Americans constructed complex dams, gates, and irrigation systems. The system helped divert needed water from the San Antonio River to the nearby farmlands.

We veered a few miles off the main trail to view one part of this complex irrigation system — the Espada Aqueduct, constructed around 1745 to help carry irrigation water across a creek to Mission Espada and its agricultural fields. It is the only remaining Spanish aqueduct in the United States, according to the National Park Service. The stone arched aqueduct — basically a bridge to carry water — carves a gentle arc upon a green pasture and seems to disappear into woodlands. The site of the aqueduct carries observers back to some of the earliest periods of our Catholic history in Texas.

When this mission was founded in 1690 as San Francisco de los Tejas in East Texas, it was the first built in what at the time was the Spanish State of Texas. In 1731, the mission was relocated to land near the San Antonio River and renamed Mission San Francisco de la Espada. Construction on the chapel was completed in 1756, according to the National Park Service.About one and one half miles south of the aqueduct, Mission Espada rose to greet us as we transitioned from the mission trail to the streets leading to it.

The southernmost mission in the chain, Mission Espada still stands relatively remote from the others.

According to the National Park Service and Archdiocese of San Antonio, the Native Americans at the Mission Espada learned vocations such as carpentry, masonry, and stonecutting. In addition, Mission Espada was the only mission in the area where brick was made.

Similar to the solar occurrence at Mission Concepción, a solar illumination takes place on the October 4 Feast Day of St. Francis of Assisi. Morning light streams in from a window to illuminate the statue of the saint on a wall behind the altar. It is fitting tribute to St. Francis of Assisi, whose charism reached all the way to Texas and involved “ministry that changes hearts” among the followers of the orders he established.

From Mission Espada we retraced our 15-mile route back to the start. This part of the ride was also special, as we enjoyed the wind at our backs and could only imagine the strength, resilience, and perseverance of the early Catholics who once passed this way before us. They had blazed this trail for the glory of God.

Know before you go

There is much to be discovered on a bicycle journey along the San Antonio River Walk and especially the “Mission Reach” part of the trail. The following tips could make your adventure more enjoyable: