Father David Bristow, pastor emeritus of St. Mary of the Assumption, dies at 81 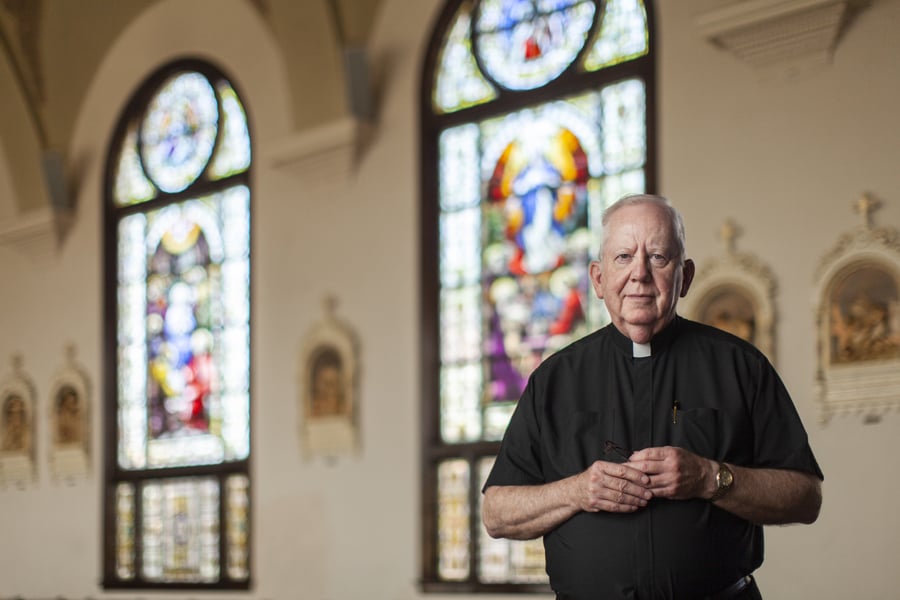 In this 2012 photo, Father David Bristow shows the stained glass windows at St. Mary of the Assumption Parish. He helped raise funds and coordinate the renovation of the windows. (NTC/Juan Guajardo)

FORT WORTH — Father David Bristow, pastor emeritus of St. Mary of the Assumption Parish on Magnolia Avenue in Fort Worth, died May 22, 2021 at 81.

Fr. Bristow was the youngest of five children born to Lester J. and Thyra Aurelia Bristow, three of whom lived to maturity — him and two sisters. Fr. Bristow was born in Marlin, in central Texas. His father was a farmer and operated his own wholesale produce business, while his mother was a registered nurse.

In January of 1959, he enlisted in the U.S. Navy and was trained as a Hospital Corpsman. He served almost 18 months in Vietnam.

He discerned a call to ordained ministry and was ordained a priest for the Episcopal Church in 1974. During that time, he served for 10 years as canon theologian to the Rt. Rev. Clarence Pope, then the bishop of the Episcopal Diocese of Fort Worth who himself had worked for reconciliation between the Anglican tradition and the Catholic Church.

After serving as an Episcopalian priest for 21 years, Fr. Bristow took a sabbatical in 1995, formally resigned, and was later received into the Catholic Church with his wife, Janice. He was ordained a Catholic priest under the Pastoral Provision two-and-a-half years later on May 23, 1998.

As a Catholic priest, he served as a parochial vicar at Most Blessed Sacrament Parish in Arlington, 1998-2000, and at St. Michael Parish in Bedford, 2000-2001. In 2001, after a short stint as temporary parochial administrator of St. Michael, he was assigned as pastor at St. Mary of the Assumption, where he served for the remainder of his priesthood. He also served as dean of the East Central Deanery from 2002-2010 and again from 2014-2016.

Like Fr. Bristow, Monsignor E. James Hart, diocesan chancellor and moderator of the curia, was an Episcopal priest before converting to Catholicism. He recalled, “The Fr. David Bristow I knew over many years was a faithful priest, who lived so as to please God. He was, in every aspect of his life, a Christian gentleman, who served the God he loved with the obvious gifts of a superb mind, a gentle heart, and an unforgettable, senatorial voice. I shall miss him greatly.”

As pastor of St. Mary, Fr. Bristow developed a relationship with Mother and Unborn Baby Care, a pregnancy resource center in Fort Worth, and invited the organization to host its annual Mass for babies who died before Baptism. The annual liturgy invites parents to bring a rose — which represents a child lost to abortion, miscarriage, stillbirth, or SIDS — to the Marian altar to ask Mary to bring their children to her Son.

“Finding consolation for that is a very difficult thing,” said Pat Pelletier, who along with her late husband Chuck, cofounded the center. “He was very kind and very good at addressing that in his homilies. We called him often if we had a girl come in who was considering an abortion who wanted to go to Confession.”

Pelletier said Fr. Bristow helped them her and Chuck cope when the latter was diagnosed with Stage 4 Cancer. Although he was only expected to live six more months, Chuck went on to live another 20 years.

“He was very close to us at that time, and helped us get through that,” she said. “There’s no way to express how much we’re going to miss him. There’s no doubt in my mind that he’s well on his way [to heaven] if he’s not there already. I hope he finds Chuck, because they’ll have a lot of fun talking.”

As a pastor and supervisor, he was very family oriented, said parish business manager Sylvia Melendez, who worked with Fr. Bristow for about 10 years.

“We all loved Fr. David,” she said. If we had issues with our families, he didn’t hesitate to let us have time off or get our kids from school. It made it easier for us to work, especially if we had children.”

Desserrie Ritner, who served as an administrative assistant with Fr. Bristow at both St. Michael and at St. Mary, said that he was like a “father figure” or “grandfather figure” for her.

“He brought a spiritual life to our office. We’d always lead our office meetings with prayer, and we’d end with prayer,” she recalled.

Just before taking the helm at St. Mary, a parish with a large Hispanic population, Fr. Bristow was sent to Mexico for an immersion experience to learn the language and the culture of the people he’d be serving.

“He loved the heritage of the Mexican people, and he tried his best to embrace the culture, especially with Our Lady of Guadalupe, the things that were important to the Hispanic culture,” Ritner said.

The Hispanic culture isn’t the only culture Fr. Bristow immersed himself. With the assistance of parish maintenance worker Zoran Radan, a native of Croatia, Fr. Bristow celebrated Mass for the Croatian community once a month.

“When we started talking, he started understanding that we leave everything when we come here. He just welcomed us with a big heart,” said Radan. “If you go to Mass in your own language, it’s different in your heart,” he added of the significance of Fr. Bristow’s efforts.

Eighty percent of those who emigrate from Croatia don’t speak English, Radan said, and many come as refugees.

“He was a really good father,” he said. “He took the Croatian community the same as if it was his children. This is why we really loved him. If you talk to any Croatian person here in the Dallas-Fort Worth area, everybody will say the same.”

Fr. Phil Petta, current pastor of Holy Family of Nazareth Parish in Vernon and neighboring parishes, said Fr. Bristow was a spiritual mentor whom he credits for his own vocation. Fr. Petta, himself a former Episcopalian, entered the Catholic Church at St. Mary under Fr. Bristow’s guidance, and two years later began discerning the priesthood, eventually even serving his pastoral internship under Fr. Bristow.

“It was one of the most wonderful experiences of my life, and I will say whenever I think of the word ‘priest,’ I think of Fr. David Bristow,” Fr. Petta said, adding that he looks to his spiritual director on how to serve.

“He was so gentle and kind and understanding in the confessional, that I consider him to be a model of Jesus Christ,” he said.

When Father Christopher Stainbrook was an Episcopalian priest serving as rector of St. Timothy Episcopal Church, he and many members of his congregation entered the Catholic Church together. The move also required a physical one.

“We had to leave our old campus and find accommodations on short notice. Fr. Bristow graciously invited us to gather at St. Mary of the Assumption,” said Fr. Stainbrook, who now serves as pastor of St. Mary the Virgin Catholic Church in Arlington, a parish of the Ordinariate of the Chair of St. Peter for converts from the Anglican tradition.

“He was a wonderful and patient teacher. He was a warm host to our displaced and somewhat demoralized congregation,” shared Fr. Stainbrook, who had served as an Episcopalian priest at the same time as Fr. Bristow. “I wouldn’t be the priest I am today without his guidance and mentorship.”

Reflecting on his ministry during the Year for Priests 2009-2010, Fr. Bristow shared with the North Texas Catholic that “being with God’s people is the fundamental element of priesthood. I draw joy and energy from being with them.”

Memorials may be given to Mother and Unborn Baby Care or to Community Hospice of Texas. He is survived by his wife, Janice; his daughters, Kathryne Denise Ross of Dallas, and Janice LaNell Smith of Hurst; eight grandchildren; six great-grandchildren; nephews and nieces.