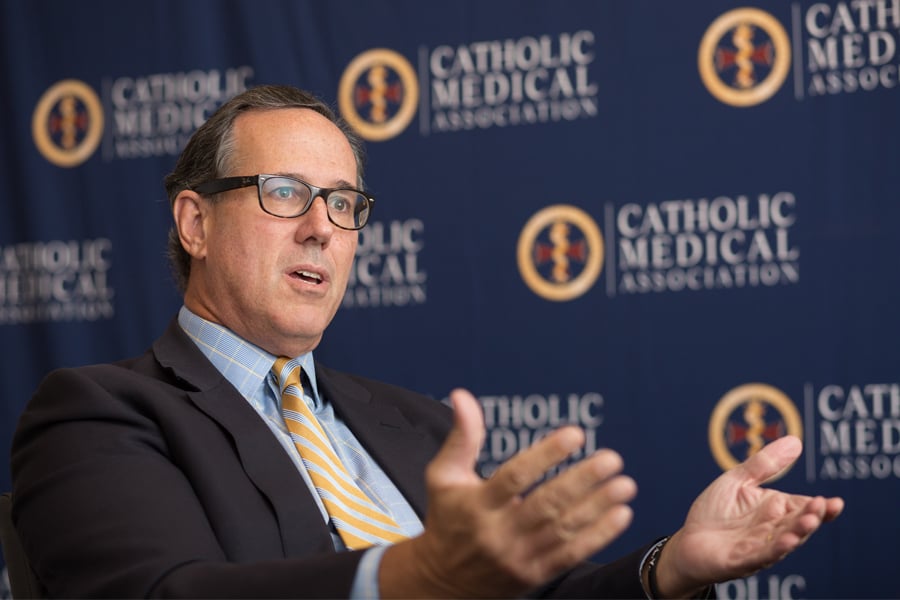 Former U.S. Senator Rick Santorum was interviewed by the North Texas Catholic during the 87th annual education conference of the Catholic Medical Association on Saturday, Sept. 22, 2018 in Addison. (NTC/Kevin Bartram)

ADDISON — Former U.S. Senator Rick Santorum urged the laity to take ownership of Church leadership, discussed the value of life and healthcare, and touched upon the dangers of current culture during the Catholic Medical Association's Annual Educational Conference held Sept. 20-22 in Addison.

Santorum, who served as a U.S. Senator from Pennsylvania from 1994 to 2007 and sought the Republican Party's nomination for president in 2012 and 2016, now works as an author and political commentator.

Santorum and his wife, Karen Santorum, had eight children including Isabella who was diagnosed with Edwards Syndrome and given a 10 percent survival chance past her first year.

Despite such odds, Santorum said he and his wife held true to their Catholic values of the sanctity of life.

“I heard the term incompatible with life,” Santorum said. “Today we have a 10-year-old kid who proves that that's a lie.”

Although his daughter is completely disabled, Santorum said the love and lessons she imparts stretch beyond measurement.

“Because when you think of it, God looks down and sees that we are all completely disabled,” Santorum said. “God doesn't need us, and we can do nothing without Him. So in that respect, what a great teacher all our kids are.”

His wife, Santorum said, often hears from women undergoing troubled pregnancies who had been advised to abort as well as mothers of children suffering chronic health problems. He called upon the medical profession to uphold the value of life.

“Don't treat them in a less or more way,” Santorum said. “But give that child a chance and treat them with the dignity that comes with parents who love and cherish that child.”

“I can't tell you the number of times I've talked to people who profess their Catholic faith,” Santorum said. “But when it comes to standing up for it in the workplace they refuse to do it and in some cases bow to thinking and practices that are counter to Catholicism. It's easy to do that, but harder to stand up.”

The dangers of failing to stand up are immense, he said.

“Everybody talks about how great the economy is and we have politicians and people who think if the economy is good, America is good,” Santorum said. “That's a lie. Because why is depression so high? Why are suicide rates and addiction so high? Why are people so unhappy in all these polls? It's that people are broken because they're being raised in a culture that destroys their purity.”

Catholics should not shy from living their faith in the public square, Santorum said.

Nor, Santorum said, is living one's faith contradictory to the precepts of separation of church and state.

“Separation of church and state is about the state not influencing the church,” Santorum said. “But of course people of faith can try to influence the public conversation. Here's the interesting part — the people who say we shouldn't let faith influence government are the often the first who would have government tell people of faith how to live their lives.”

On the healthcare front, Santorum said that although he is not a lobbyist and no longer a politician, he and others are working on a plan to transform healthcare to a block grant system whereby states receive funding and power to create individual health systems that best fit their needs. The proposal calls for 10 percent of the funding to go toward care of chronically ill and medically high-risk individuals.

In a culture where so many forces undermine parental authority and family values, the key is to be honest, be an example, and be involved, he said.

“You've got to be in their lives and they've got to know that you love them,” Santorum said.

Parents likewise need be honest with themselves.

“Where do you spend your time?” Santorum said. “Obviously you have to provide for your family and do things outside the family unit. But do you devote your time to the family structure and do your children see that?”

Santorum called parenting both the hardest and most worthwhile job one can undertake.

“They are the only thing you will ever do in your life that is eternal,” Santorum said. “Nothing else — jobs, all the things you do — is eternal. Everything else dies with you except to have a child, create an eternal soul.”

Living one's faith is equally hard, often subjecting one to ridicule, criticism, loss of position, or worse, but also so worth it, Santorum said, in quoting John 15:18.

“No one knows what that is, no, don't look at your cellphones,” Santorum said. “It is, 'They will hate you but remember, they hated me first.'

“In a world where everyone wants to be famous and have their Facebook posts liked with hearts and thumbs up, don't be afraid to be hated. This country needs people who are willing to do what He did and shake it up with the truth.”

“A humble man but also one willing to step out defend the faith and defend America,” Rastrelli said. “We need to stand up for faith and work to return to God and God's moral laws.”