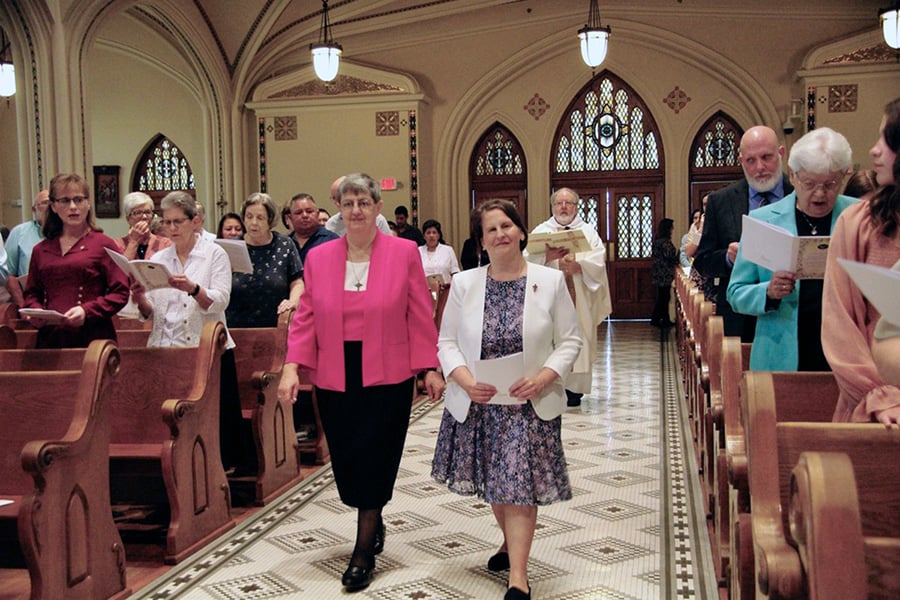 SAN ANTONIO — Sister Megan Grewing, CDP, still has a prayer card from a high school Confirmation retreat hosted by Sacred Heart Parish in Muenster. That retreat was foundational for her faith journey.

Her Confirmation retreat ignited her personal relationship with God. “I knew about God, but I didn’t know God prior to having that experience.”

She was particularly struck by a talk explaining “the real presence of Christ in the Eucharist.” After that retreat, Sr. Megan recalled, “I felt like I knew God so much more personally in my life.”

Grewing’s faith formation at Sacred Heart opened her heart to God’s call to a religious vocation. On Sept. 3, 2022, Sr. Megan professed her perpetual vows as a Sister of the Congregation of Divine Providence at Sacred Heart Conventual Chapel of Our Lady of the Lake University in San Antonio. The church was filled with “about 160 people,” according to Sr. Megan. Over half of these were family and loved ones from Muenster.

For Sr. Megan, professing perpetual vows is just the beginning of her “beautiful journey.”

After graduating high school, Grewing became involved in Catholic campus ministry at North Central Texas College and later at Midwestern State University. While she had known of religious sisters and nuns in Muenster, Grewing developed a friendship with two sisters when she began work on her master’s degree at San Angelo State University: Sister Malachy Griffin, OP, and Sister Kathy Kudlac, SSSF, who encouraged Grewing to explore her vocational calling.

Grewing encountered the Congregation of Divine Providence while volunteering at a conference and arranged for a visit. Soon she became an affiliate of the San Antonio-based order, then a resident affiliate. She joined the pre-novitiate program, became a novice, and in June 2017, she made her temporary vows to God: “I pledge to this group of women my unique contribution of self — all that I am and yet can be — in service to Your Son that together we may give witness that You became human and lived among us.” She keeps a copy of these vows in the oratory in her residence in Houston.

Beginning in 2018, Sr. Megan renewed her temporary vows each year. “In my fourth year, I started feeling very confident … that this was my vocation,” Sr. Megan recalled. At the end of that year, she spoke with Sister Frances Lorene Lange, CDP, her formation director, about preparing for perpetual vows. Sr. Frances encouraged Sr. Megan to take time to consider and pray.

“Everything done in the convent is slowly, purposefully, prayerfully,” said Sr. Megan. A few weeks later, she announced she was ready.

When Sr. Frances first met Sr. Megan, she observed, “She already had the seed of spirituality planted deep in her, planted by her family. It’s been truly an awesome privilege to help foster her charism as she grows and develops in the ministry where God is calling her.”

For Sr. Megan, being a religious sister and working as a licensed counselor at Gratia Plena Counseling in Houston are both important aspects of her vocation and mission as a CDP sister. “Everything gets redeemed through the cross,” she said.

In more than five years as her formation director, Sr. Frances observed Sr. Megan’s commitment, focus, and sincere love for God and for her counseling clients.

“She has a deep, deep desire to further the mission of Jesus,” Sr. Frances said. “She sees the hand of God in the midst of the easy and the difficult, in the joyful and the sad.”

Her formation director, noting Sr. Megan’s ability to listen and empathize, said, “She holds a place of faith, virtue, and joy open for [her clients], where they can heal.”

The evening before the profession, the CDP held a special prayer service to celebrate Sr. Megan. About 30 sisters were present, as well as their liturgist John Miller and Sr. Megan’s boss, Dr. Kenneth Buckle.

“I didn’t want any frills,” said Sr. Megan, “just prayer.” Some of the sisters who would be unable to attend the following day due to mobility difficulties were present at the gathering.

During the Mass of her Profession of Perpetual Vows, Sr. Megan was presented with a ring. “This is a sign of my fidelity to God and God’s fidelity to me,” she told the NTC, holding up the silver ring.

Professing perpetual vows “is not the finish line,” said Sr. Megan. Her growth in faith at Sacred Heart Parish in Muenster, her discernment process, and her spiritual formation as a CDP sister — all these foundational experiences “have been to get me to the starting line,” she said.

EDITOR’S NOTE: This article contains reporting from a Sept. 1, 2020, NTC article about Sister Megan Grewing’s renewal of her temporary vows.