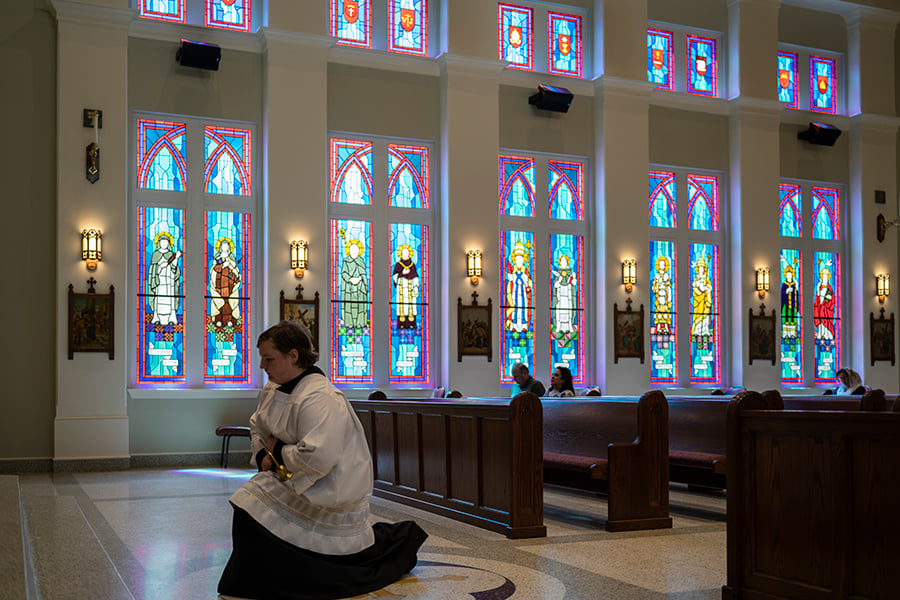 Cavallini Stained Glass Studios designed and installed more than 10 windows, completing them within a six-month period.

Many of these saints helped reform the Church during tumultuous times.

Fr. Walterscheid expressed his excitement and anticipation for the possible impact the windows could make on the students.

“We are competing against people at universities, and I want students to look up to doctors of the Church as they look up to their professors,” the pastor explained.

Students sometimes place a greater emphasis on the views espoused by their professors than on the teachings of the Church.

Upon entrance into the church’s main sanctuary, the first windows feature St. Augustine and St. Ambrose. Fr. Walterscheid chose these two Church doctors because of their close friendship, as well as St. Ambrose’s role in converting St. Augustine.

“Today, we need more relationships to draw people back to the Church,” he said.

Other saints featured on the windows include St. Teresa of Avila and St. Catherine of Siena, who helped with Church reform.

“These are people who helped guide the Church in a time of turmoil. They helped redirect the Church back into the faith where it needed to be,” Fr. Walterscheid added.

The pastor also said the windows are symbolic of a “walk through the centuries with the saints as you go down the aisle to receive Communion.”

St. John Paul II Church also installed two rose windows. One features the Lamb of God and the seven seals from the Book of Revelation. The second features Jesus as the Good Shepherd, which illuminates at night for students walking past the church.

“The intention is to show a very welcoming sign,” he said.

Each window is of equal importance to the parish, especially as their primary purpose is to direct students to knowledge of the greatest saints in Church history.

“The idea is that anyone who wants to argue against the Church — I’m not here to argue with you,” Fr. Walterscheid explained. “Read the writings of one of those saints, and then come back to me and we will have a civil conversation.”

Fr. Walterscheid published several images of the windows on social media. The post generated over 140 comments and more than 450 reactions.

“They’re beautiful!” Facebook user Tracey Jones added. “How can the Holy Spirit not use them to speak to the hearts of passers-by?”

David Gardiner, a designer for the project, also commented.

“Traditional evangelization! So honored to have been part of it all. May God be praised!”

Let us turn to these great Church doctors to guide and intercede for the parishioners and university students at St. John Paul II Church!