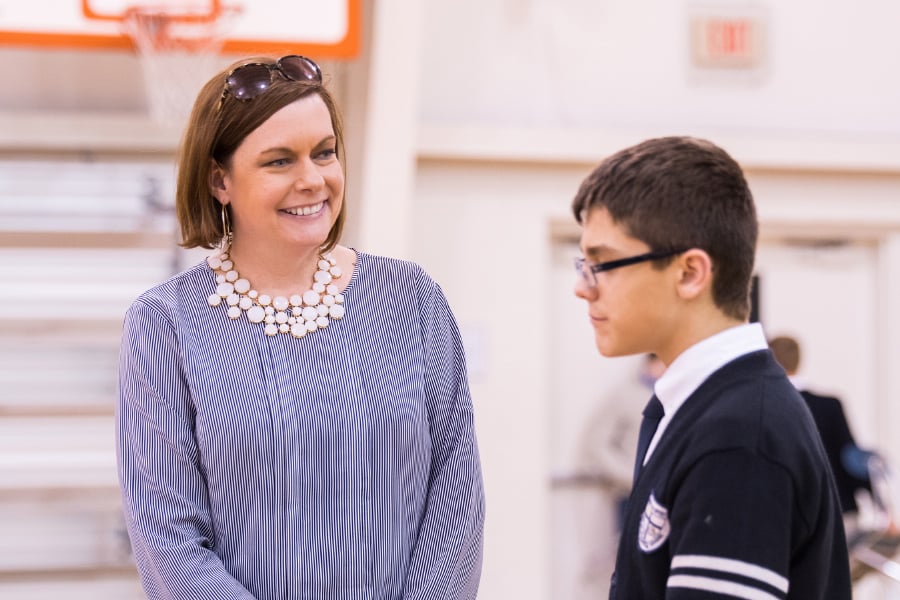 FORT WORTH — When she served as Superintendent of Catholic Schools for the Diocese of Fort Worth, Jennifer Pelletier was known for her passion for students and staff and her willingness to go to great lengths to support them.

So motivated was Pelletier by this experience that she challenged Bishop Michael Olson to join her and the class at Nolan at a later date to dissect cow brains.

“I saw how enthusiastic she was when she got to be with teachers. She was so excited and so glad to be a part of teaching,” Hubbard said.

Love for people and love for God were the frequent themes for Pelletier’s life from those who knew her in the diocesan school community.

Pelletier died in hospice in Irving on Nov. 6, surrounded by family and close friends after a three-year battle with cancer. She was 49.

Born to Chuck and Patricia Pelletier on Jan. 8, 1973, in Fort Worth, she attended Holy Family Catholic School and Our Lady of Victory Catholic School. Her parents founded the Mother and Unborn Baby Care Center of North Texas.

After graduating from Arlington Heights High School, Pelletier earned bachelor’s and master’s degrees from the University of Dallas in Irving.

Although she had no plans to become a teacher when she entered college, she was inspired by Nancy Russell, then-principal of St. Luke Catholic School in Irving, to come teach at the school.

She also taught at St. John’s College High School in Washington, D.C., where she was drawn to work with children with learning disabilities. Next, she served as president of St. Joseph Catholic School in Bryan, Texas, before becoming Superintendent of Catholic Schools in the Diocese of Fort Worth in 2015.

Bishop Olson, commended Pelletier for her efforts on emphasizing Catholic identity in the Catholic Schools across the diocese. He said she “exemplified what it means to work as a teacher and administrator, as a minister of the Church.”

He continued, “She led by example and worked with the principals, teachers, students, and staff of the Catholic schools of the Diocese of Fort Worth as collaborators in ministering for the Kingdom of God. She was a woman of faith, who placed a priority on Catholic mission and identity in schools before many others in the nation emphasized this.”

The prelate noted some of her most significant contributions to Catholic education in the diocese, which included “the ongoing and regular formation of teachers and administrators, the development of Safe Environment and security for school campuses, the early development of Cristo Rey, developing programs for students in need of accommodations in learning, the renewed mission and Catholic identity of Cassata Catholic High School, the collaboration with the [department] of Catechesis in the diocese, and the fostering of the integral unity between our Tarrant County parochial schools and Nolan Catholic High School.

“Our schools are well prepared to evangelize the contemporary culture because of the ministry of Jennifer Pelletier. I will miss her very much,” Bishop Olson concluded.

Pelletier came to the school and spent time with the staff, bringing lunch, an inspirational passage from Mother Theresa, and a comforting presence.

“That’s where our relationship started,” Leafgreen said. “She was so strong and so good at looking at how she could help people and really help build the Kingdom.”

Pelletier encouraged Leafgreen to become a principal and helped make that happen.

“She had the ability to see the good in people and what they are capable of and encourage them to do that,” Leafgreen said.

She once asked Pelletier how she always seemed to have the right answer, the answer that leads you closer to God, even in difficult situations. Pelletier told her that she worked hard to block out the voice of the world so she could better hear the voice of God.

“She was authentically Catholic, standing for what the church teaches,” Leafgreen said.

Melissa Kasmeier, assistant superintendent of Catholic schools in the diocese, was a principal at St. Andrew Catholic School when Pelletier arrived. What stood out to Kasmeier was Pelletier’s enthusiasm for education and faith.

“She was super passionate, unstoppable,” Kasmeier said. “When she knew what was right and good and best for our students, she was able to make it happen.”

Though her tenure as superintendent was not long, she made a tremendous impact.

Amy Felton, principal at St. John the Apostle in North Richland Hills, said Pelletier encouraged her to apply for the National Blue Ribbon Schools Award, which the school just won. She noted that Pelletier led the efforts to implement classical education, with a focus on great literature and critical thinking, down through the elementary schools.

Hubbard said that Pelletier’s faith stood strong throughout her battle with cancer. Pelletier prayed novenas for Hubbard, who was facing health concerns herself, while at chemotherapy.

She also took up boxing to help her body physically fight the illness.

Kasmeier will remember Pelletier’s love for Christ, the Eucharist, and the saints.

She also will remember a friend who loved shopping, fashion, good food, and spending time with young people.

Pelletier helped Kasmeier’s daughter Abbey, who graduates in December, apply to the nursing school at Texas Christian University. Abbey in turn helped Pelletier early on during her illness.

Pelletier’s strong faith and commitment to prayer inspired those who knew her.

“She would talk about the order of charity: God, family, and work. Everything should lead back to what God is doing in our lives,” Kasmeier said. “She wasn’t just telling people to do that, she modeled it.”