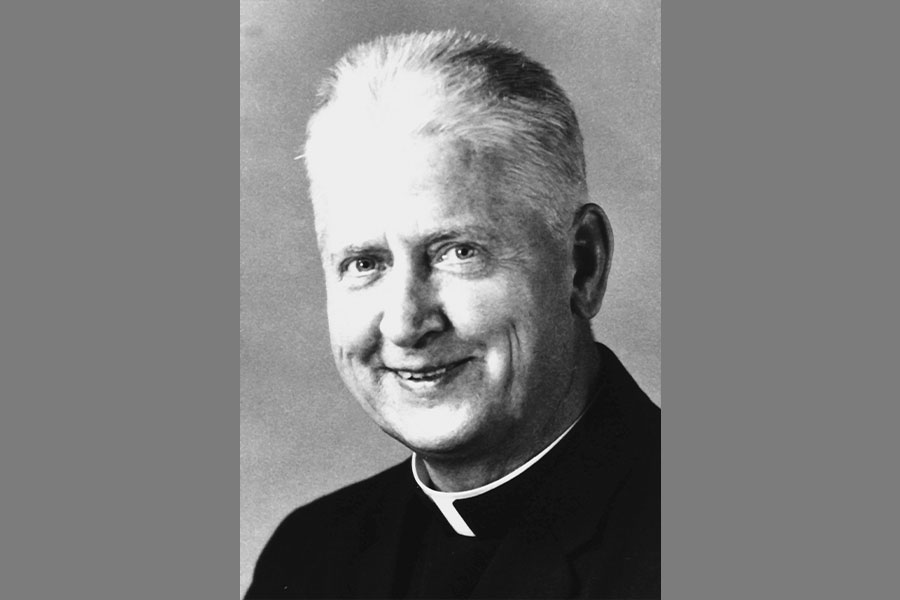 Jesuit Father Walter J. Ciszek, a Pennsylvania-born missionary to the Soviet Union, is pictured in an undated file photo. Father Ciszek survived 23 years in Russia, 15 of those years at hard labor in the Gulag, the horrific Siberian labor camps. (CNS photo/A.D. Times)

Walter Ciszek was a tough kid growing up in the rugged coal country of Shenandoah, Pennsylvania. In the mysterious ways of God, he entered the Jesuit novitiate in 1928 and, as a novice, offered to go to the Russian missions.

In 1938, he was sent to Poland and later accompanied workers who were heading into the Soviet Union. He was arrested on a bogus charge of being a Vatican spy in 1941.

Kept in solitary confinement for five years and subject to endless interrogations, eventually his captors broke his spirit, and he signed a confession to avoid immediate execution.

"Do you realize, you stupid American, the seriousness of this final procedure? ... If you don't sign those papers, I can sign one right here, and you'll be dead before the sun sets!"

After having prayed for strength, prayed for the conversion of his captors, prayed to be an instrument of God's grace for the Russian people, the tough guy from Pennsylvania coal country had been beaten.

Father Ciszek went back to his cell feeling horrible. He had given in. He felt he had failed the Jesuit order, the church and God. But he eventually learned the lessons of poverty of spirit.

There had been too much of egocentric self, too much of Walter and not enough of Jesus in his life.

His false self, his overly strong guy independent self, underwent a "purging, through purgatory, that left me cleansed to the bone. It was a pretty hot furnace ... very nearly as hot as hell itself. Yet, thanks be to God ... I had learned, to the depths of my shaken soul, how totally I depended on (God) for everything even in my survival and how foolish had been my reliance on self."

Father Ciszek survived 23 years in Russia, 15 of those years at hard labor in the Gulag, the horrific Siberian labor camps. During those years, he struggled to minister as a priest. He practiced living each day totally dependent on God.

What was God doing through Father Ciszek during all those years of hidden ministry? Preparing him to write two books, with the great help of a fellow Jesuit. Out of those trials and stripping of the false self came "He Leadeth Me," a spiritual classic for the ages.

To be poor in spirit is to be in need of God, to desperately desire God's consolation and aid. Comfortable lives mask our need for and our dependence on God. We think we can take care of ourselves. We say "In God we trust" on our money, not about our celebration of the Eucharist.

The pandemic revealed to many of us our deep need for community and church. Let's keep in touch with our poverty, our need, for God and one another as we return to a new normal.

When we trust in possessions, power, pleasure and in our own strengths, we too often pulverize the poor and erect walls and barriers to true community. When we trust in God, we realize our need for God's grace, i.e., to borrow from St. Thomas Aquinas, "the ability to do what we could not do before."

Being poor in spirit encourages and enables us to reach out to economically distressed and disadvantaged people, not as superior beings, but as brothers and sisters. Kind kinship is the goal of the kingdom of God.

Pope Francis, in his encyclical, "Fratelli Tutti, on Fraternity and Social Friendship," challenges and calls us to serve one another out of our poverty of spirit. When we learn poverty of spirit, we build bridges, not walls.

The pope writes of "the temptation to build a culture of walls, to raise walls, walls in the heart, walls on the land, in order to prevent this encounter with other cultures, with other people. And those who raise walls will end up as slaves within the very walls they have built" (No. 27).