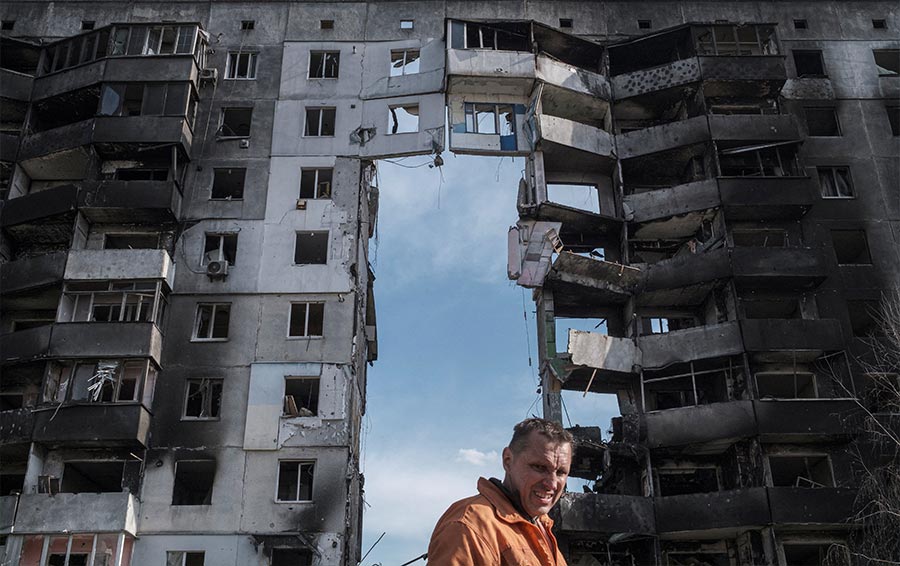 A clean up worker walks past buildings that were destroyed by Russian shelling in Borodyanka, Ukraine, near Kyiv, April 7, 2022. (CNS photo/Marko Djurica, Reuters)

FORT WORTH — Bishop Michael Olson and local Catholics with ties to Ukraine reacted to Russia’s military attacks on cities across Ukraine on February 24.

In a memorandum to priests and parishioners in the Diocese of Fort Worth, Bishop Olson requested that the faithful “pray for peace, an end to war, and for the safety of all people of Ukraine who have been traumatized by the unjust Russian invasion of their homeland.”

He continued, “In a special way, our prayers and solidarity are with Father Pavlo Popov and the parishioners of St. Sophia Ukrainian Greek Catholic Church in The Colony, Texas, and with all of their loved ones living in Ukraine. May the Lord deliver them from harm and sustain their faith during this traumatic event.”

A member of St. Sophia Parish, Mark Krasij believes the Ukrainians will “fight in the streets” for the freedom of their country because they remember living under Nazi and communist regimes.

He questioned the false claim that Ukrainians and Russians are one people with a shared history that Putin asserted to justify the invasion. He asked, “If that’s true, then why are you killing your brothers?”

“History is repeating itself,” he said. “Russia always felt [Ukraine] was theirs.”

Chrystya Geremesz is a member of St. Sophia Parish since it was established more than 20 years ago. Her parents came to the U.S. from Ukraine after World War II, and she was raised in a Ukrainian community in Pennsylvania before moving to Texas.

Geremesz views the Russian attacks on the Ukraine in stark terms of a battle between “democracy and dictatorship, good and evil. They are like oil and water; they don’t mix.” The Russian invasion is another example of aggression that dates back centuries, she stated, including Stalin’s genocide by starvation that killed at least 3.9 million  Ukrainians from 1932-33 and the Russian occupation of Crimea and Eastern Ukraine beginning in 2014, in which about 14,000 people have been killed.

She founded the Ukrainian American Society of Texas about 40 years ago to preserve the food, language, dance, music, faith traditions, and culture of Ukraine that was suppressed when the country was behind the Iron Curtain of the Soviet Union.

“It’s a scary time in the world,” she said, expressing her desire that countries will “stand up and come together as a world to stop Putin,” beginning with a bipartisan response from the U.S.

She hopes that Russian forces can be stopped before “too much death and destruction” is waged.

North Texans, she said, should learn a little about the history of Ukraine, a large democracy-loving country, to better understand the situation. The website for the Ukrainian American Society of Texas at UAST.org gives background on the country’s history and culture.

“We need all of Texas praying,” she said, “from every church. Prayer is extremely powerful, and we need a miracle.”

And, she added, “as angry as I am,” she has sympathy for the Russian people, who will be most hurt by economic sanctions but do not support a war between Ukraine and Russia. 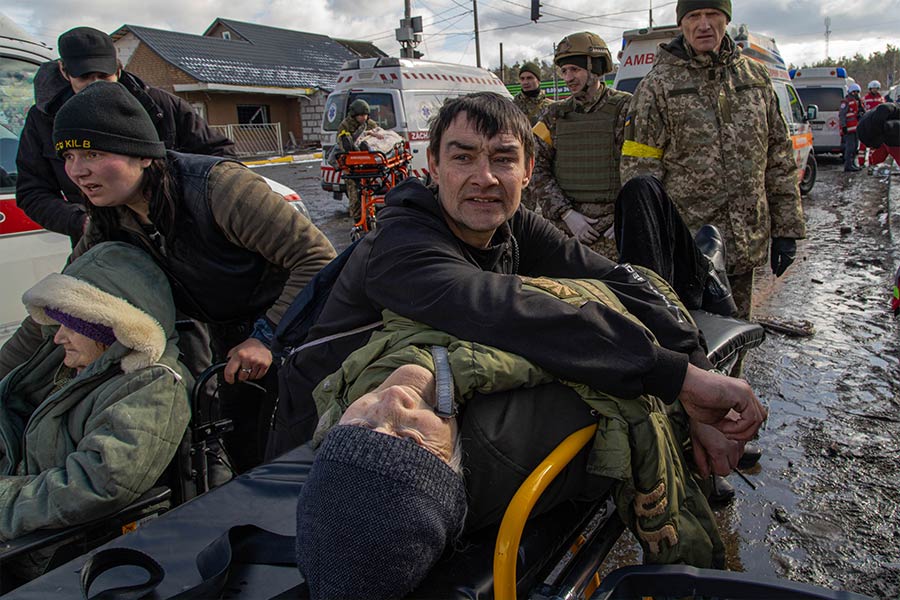 A Ukrainian man comforts his father as they evacuate across the Irpin River in March 2022. (Photo by Yan Boechat)

Marta Petrash, who was born and raised in Ukraine, also lays responsibility for the invasion on Vladimir Putin and not the Russian people.

A St. Sophia parishioner and choir member, her family had firsthand experience with the brutality of the Soviet Union when her grandfather, a Ukrainian Catholic priest, was deported to Siberia in 1946 when he would not renounce his faith. She remembers him as “deeply spiritual and heroic,” saving a Jewish family during the Nazi occupation of Ukraine.

Petrash immigrated to the U.S. in 1991, but her mother, brother, and other relatives still live in Ukraine. Her family recently fled their home in the Western Ukrainian city of Ternopil to stay with relatives in a rural area, where they are fairly safe for now, she believes.

She encouraged North Texans to pray and to contact their members of Congress to support Ukraine with military weapons and strict sanctions on Russian.

She’s been encouraged by news of Poland and Moldova opening their borders to refugees, and by North Texans who want to help with a humanitarian crisis.

Pope Francis has asked that “believers in a special way devote themselves intensely to prayer and fasting for peace in Ukraine” on Ash Wednesday, March 2.

Bishop Olson added, “Since Ash Wednesday is a day of prayer, fasting and abstinence, I ask that all Catholics in the Diocese of Fort Worth follow the Holy Father’s admonition and apply these penitential actions for the intentions of peace in Ukraine.”

He asked all parishes to include in their prayers of the faithful, “For peace and an end to the unjust aggression perpetrated against Ukraine and that world leaders refrain from any action or inaction that would cause even more suffering to people and foment further discord among nations discrediting international law.”