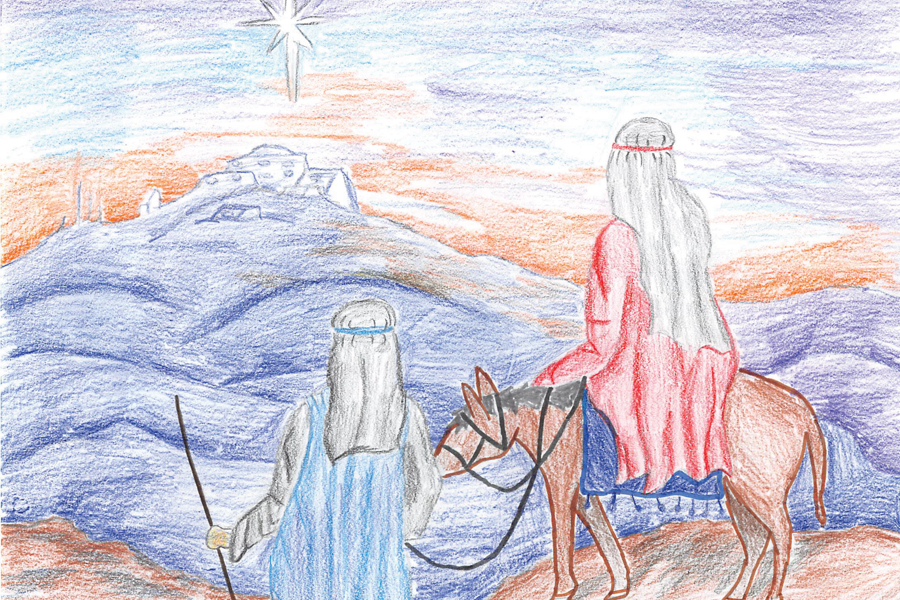 Kaylee Martinez submitted this artwork last year, and it was selected as one of 24 national winners in the Missionary Childhood Association Art Contest. At the time, Kaylee was a seventh-grade student at St. George Catholic School in Fort Worth. Submissions are being accepted for this year's contest.

FORT WORTH — Last year, Kaylee Martinez and Alexis Condor were among the nearly 150 young artists who entered the diocese’s annual Missionary Childhood Association Art Contest. This year, their artwork is on display at the Basilica of the National Shrine of the Immaculate Conception in Washington, D.C.

The young artists were selected as two of the 24 winners from across the country whose submissions are displayed in the nation’s capital during Advent and Christmas. The artwork of the two grand prize winners will be reproduced as the organization’s Christmas cards.

Again this year, the Diocese of Fort Worth is sponsoring a Missionary Childhood Association Christmas Artwork Contest during December 2018 through January 2019.

In a previous interview, Father Tom Craig, head of the Diocesan Office of Pontifical Missions, said that this contest is a way to increase young people’s appreciation for missions.

“I think it brings about an awareness of missions and how children can help children in missions throughout the world,” he said. “It’s a simple way of using their own talents to express their faith.”

“The contest also raises awareness of the simple things they can do that also can bring about a change in faith, change in them, and help them to continue to grow in faith and, hopefully, as they grow older, they will take a more active stance in evangelization and spreading the good news.”

Participants, ranging from kindergarten to eighth grade, must adhere to a series of guidelines regarding which supplies may be used and which Christmas-themed scenes they may recreate in their submitted artwork.

Submissions are accepted from now until January 31, 2019. More details can be found at fwdioc.org/mca-national-christmas-artwork-contest.

Deliver or mail drawings to: