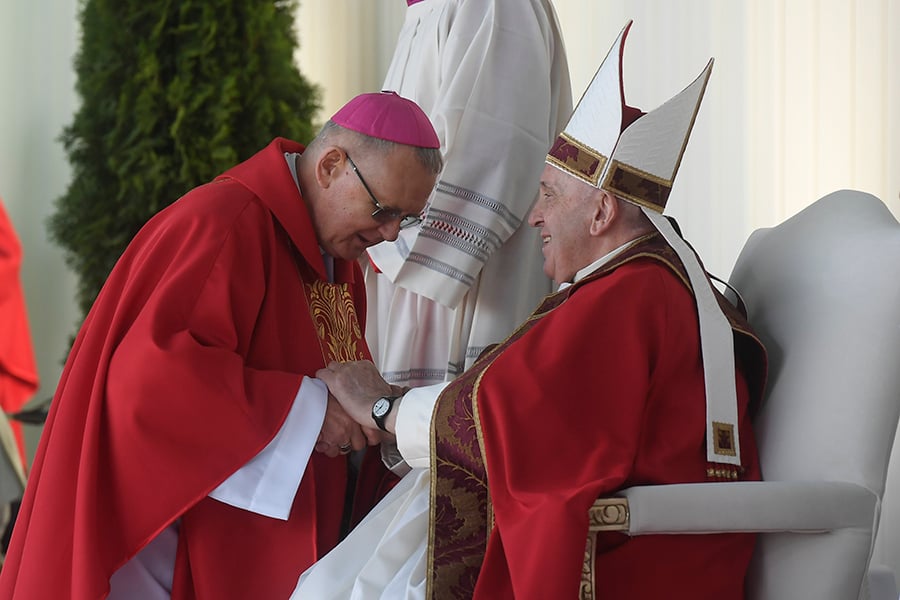 NUR-SULTAN, Kazakhstan (CNS) — The painful memories of the persecution of Christians in Kazakhstan serve as a reminder that peace "must be achieved anew each day," Pope Francis said.

Celebrating Mass on the feast of the Exaltation of the Cross Sept. 14 at the Expo grounds in Nur-Sultan, the pope said that, much like the people of Israel experienced serpent bites in the desert, the people of Kazakhstan felt the painful bites from the "fiery serpents of violence, atheistic persecution and all those troubled times when people's freedom was threatened and their dignity offended."

"We do well to keep alive the memory of those sufferings and not forget certain grim moments; otherwise, we can consider them water under the bridge and think that now, once and for all, we are on the right road," he said.

Before concluding the Mass, Pope Francis prayed for "all the war-torn areas of our world," including Ukraine, which has been under attack by neighboring Russia since the end of February.

The pope prayed that the world would "never grow accustomed to war or resigned to its inevitability" and instead choose peace through dialogue.

He also appealed for peace between Armenia and Azerbaijan, just southwest of Kazakhstan, after reports that new clashes Sept. 12-13 led to the death of 100 soldiers. According to the Reuters news agency, both countries blamed each other for the fighting.

"I have learned with concern that, in recent hours, new outbreaks of tension have flared up in the Caucasus region. We continue to pray that peaceful dialogue and harmony will prevail in these territories over disputes as well," the pope said.

"Let us continue to pray that our world may learn how to build peace, not least by limiting the arms race and converting the enormous sums spent on war into concrete assistance to peoples," he said.

Among the estimated 3,000 people present at the Mass were 500 Catholic pilgrims from the Archdiocese of Moscow.

Father Erich Maria Fink, who has lived and ministered to Catholics in Russia for 22 years, came to the outdoor Mass with 14 parishioners from Mary, Queen of Peace parish, located near the Ural Mountains, where he serves.

Father Fink told Catholic News Service he was in Kazakhstan when St. John Paul II visited in 2001 and that like then, Pope Francis' visit to the country is an opportunity for Christians in the country "to cultivate a dialogue."

"Now all people — the priests, the people of Kazakhstan — they feel that it's a great chance for Christians to show who they are and how important is it to bring this dialogue, this open heart, to the world," he said.

The invasion of Ukraine, he said, has divided many Catholics in Russia. Furthermore, "we as priests, we as the Catholic Church, we cannot say anything because if we start a discussion (about the war), we would close all doors for our pastoral work."

Nevertheless, Father Fink told CNS that "everybody knows what we think."

"Everybody knows what is the line of the pope, of the Catholic Church. And what we can do is every time we have the holy Mass, we pray for peace, and we are praying for the soldiers and the people who have died in Ukraine. We are praying for their souls," he said.

Reflecting in his homily on the meaning of the feast of the Exaltation of the Cross, Pope Francis said that while the cross "is a gibbet of death," the church celebrates it as the means used by Jesus to vanquish evil through love.

The day's first reading, from the Book of Numbers, recounted how serpents bit and killed many Israelites after they expressed their distrust in God and in Moses.

The image of the serpent, the pope said, is a reminder of the devil who, in the form of a serpent with Adam and Eve, "sowed seeds of distrust in them, convincing them that God is not good, and is even envious of their freedom and happiness."

Christians, he said, must look closely at those moments when their trust in God and in each other "has failed" and has caused them to grow "disheartened and impatient in our own personal deserts, and lose sight of our journey's goal."

There are "situations in our lives when, as individuals, as a church and as a society, we can be bitten by the serpent of distrust, poisoned by disillusionment and despair, pessimism and resignation, and caught up only with ourselves, lacking all enthusiasm," the pope said.

But keeping one's gaze fixed on Jesus on the cross is the "path to our salvation," the pope said, because in Jesus' outstretched arms "we learn love, not hatred; compassion, not indifference; forgiveness, not vengeance."

"On the wood of the cross, Christ removed the venom from the serpent of evil," Pope Francis said. "Being a Christian, then, means living without venom: not biting one another, not complaining, blaming and backbiting, not disseminating evil, not polluting the earth with the sin and distrust that comes from the evil one."