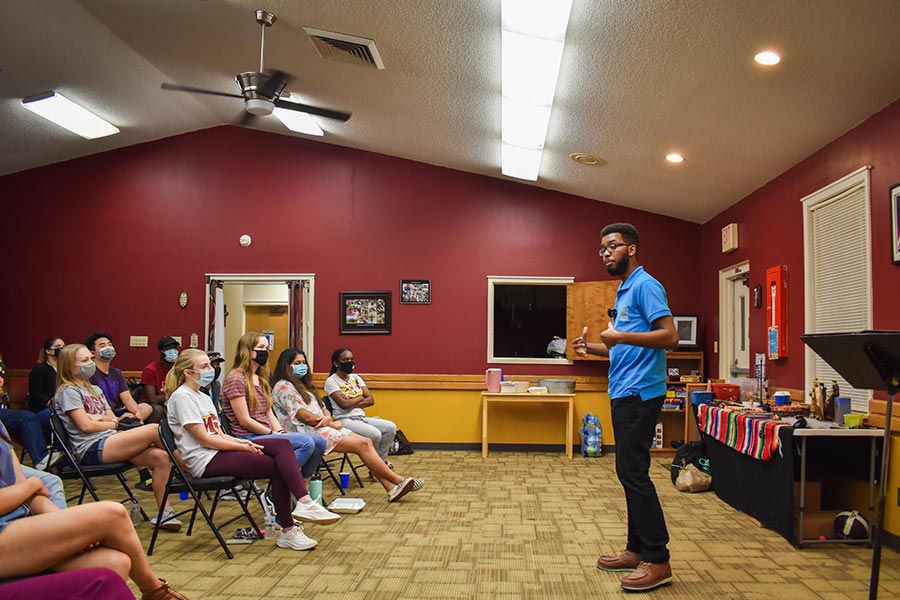 Omar Combie, a 21-year-old sophomore at MSU and Catholic Campus Center assistant, gave his testimony to his fellow CCC members about how indirect racism has affected his life. (NTC/Jenara Kocks Burgess)

WICHITA FALLS — Recognizing that every person has dignity that comes from God, treating each person with dignity, and then building a community of individuals who live by these concepts are the keys to helping our country be healed from racism, according to four speakers at Midwestern State University’s Catholic Campus Center in Wichita Falls.

On the first night of the two-part series, Jason Spoolstra, interim director of evangelization and catechesis and director of youth, young adult, campus, and singles ministry, used Scripture and the Catechism of the Catholic Church to teach students that God gives every single person inherent dignity because He created each of them in His image and likeness.

Spoolstra quoted the Catechism’s definition of human dignity (357), and how understanding that and teaching it in our families can break down the sin of racism in society.

He also asked students to engage in discussion about the parable of the Good Samaritan.

Also, on the first night, Debbie Veitenheimer, director of campus ministry at MSU’s Catholic Campus Center, explained the definition of community based on the Catechism of the Catholic Church, which includes quotes from a Vatican II document “The Church in the Modern World.” The document tells the faithful that discrimination of any kind must be eradicated. She also challenged the students to reflect on how they can spread love in their own community.

Veitenheimer said the idea for this series of talks for their Faith and Fellowship Nights came out of a conversation she had during the summer.

“We have such a diverse population here at the CCC, and when racial tensions [in the U.S.] were getting really high, I asked if I could lead dialogues and prayer surrounding the issues,” she said.

On the second night of the series, Father Jonathan Demma, parochial administrator of Sacred Heart Parish in Wichita Falls, explained the differences between bias, prejudice, and racism. He also talked about how people’s struggle with these concepts in America, coupled with the rhetoric of politics and media coverage, have made it extremely difficult for people to communicate effectively on these issues.

He also told several stories of when he was a Franciscan Friar of the Renewal for nine years in the metropolitan New York area.

“We have everything we need to conquer racism,” Fr. Demma explained. “That’s why we must make sure when we have a one-on-one encounter with every single person, they experience their dignity through us, and that they know that the reason we are doing it is because of Jesus Christ.”

He repeated that a true understanding of human dignity must be based on faith in God.

“[A humanitarian understanding of human dignity] doesn’t leave people understanding that they have a unique, eternal, salvific soul that is meant to be in eternity in Jesus Christ. That’s where our dignity must be rooted. That’s what we must give every person. And it’s so important,” he said.

Also, on the second night, MSU CCC student Omar Combie, from St. Lucia in the Caribbean, gave his testimony about how racism in the U.S. has indirectly affected his life both when he lived in the Caribbean and now that he lives in Texas.

Combie went to school with the brother of Botham Jean, a 26-year-old St. Lucia native, who was shot and killed in his own apartment by his neighbor, Dallas Police Officer Amber Guyger.

This tragedy hit Combie and everyone he knew in St. Lucia hard.

Coupled with the racially-charged news and television shows broadcast in the Caribbean, it further degraded both Combie’s personal bias of America as well as the bias of many people in his country. By the time he came to MSU in 2019, Combie had heard many warnings from family members, friends, and even strangers in St. Lucia about the U.S. And at first, he stayed close with other people from the Caribbean at MSU.

“Thankfully, we have communities like the CCC where we have people from all areas. But there are still sometimes these barriers outside these communities where it’s you versus them and that’s not good,” Combie said.

He continued, “So, the major takeaway — individuals build community. Community builds individuals. We have this great CCC community and these members will tell you it has changed them, it has improved them, and it has made wonderful, positive changes in their lives. But that community was created by individuals willing to come together and put in that effort.”

Combie concluded, “It’s the same thing outside in the world we have today. We won’t be able to combat racism and discrimination overnight or even institutionally. It will help, but history has shown us even when the law says this, what people do is completely different at times. So, look out for each other.”