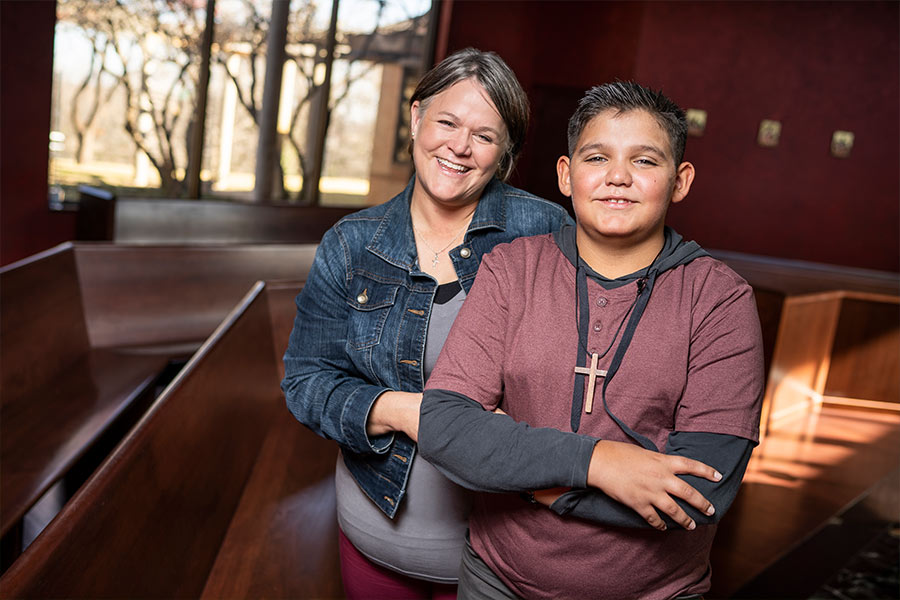 Missionaries Karen Del Castillo and her son Gabriel visited Texas for the first time in 34 months in January. (NTC/Juan Guajardo)

Karen Del Castillo is starting her fifth year of a two-year assignment. And the end is nowhere in sight.

The former youth coordinator and member of Assumption of the Blessed Virgin Mary Parish in Decatur has served as a missionary in Peru since January 2018 with her two younger children, Julianna and Gabriel.

They arrived in Peru with their “little bitty ‘yes,’” plus a $10 monthly pledge from one benefactor, said Del Castillo. She admitted it was “a leap of faith,” but the single mother has seen God work miracles.

They spent their first year in Peru in an established mission with others from Family Missions Company, an apostolate of Catholic laity dedicated to foreign missions and headquartered in Abbeville, Louisiana.

After that year, Del Castillo felt called to move her family to a more remote pueblo about nine hours away in northern Peru.

The local bishop accepted her proposal, and she and her children moved to Cajaruro, where they serve as catechists to four towns.

“The Church is not doing well” in the region, Del Castillo explained, and two priests struggle to serve the 250 pueblos in the district. On the many Sundays when a priest is not available to celebrate Mass, the family leads a Liturgy of the Word service.

During the week, their ministry is less structured but just as important.

“The Holy Spirit guides us,” she said. “Every person we meet is meant for us. It’s a single mom. It is torn-apart kids that don’t know where their mom or dad are because they’re living with grandma or tía.

“That’s where our ministry is. Befriending them, helping them, walking with them, discipling them, asking them to come to church, having meals with them, just loving on them as much as we can,” she explained.

Del Castillo’s experience of Jesus healing her wounds from a broken marriage helps her relate to the women, who are often trapped in poverty and damaged relationships.

“My goal is for these women just to know that Jesus is with them. Though your spouse might not be with you, Jesus is always with you,” she said. 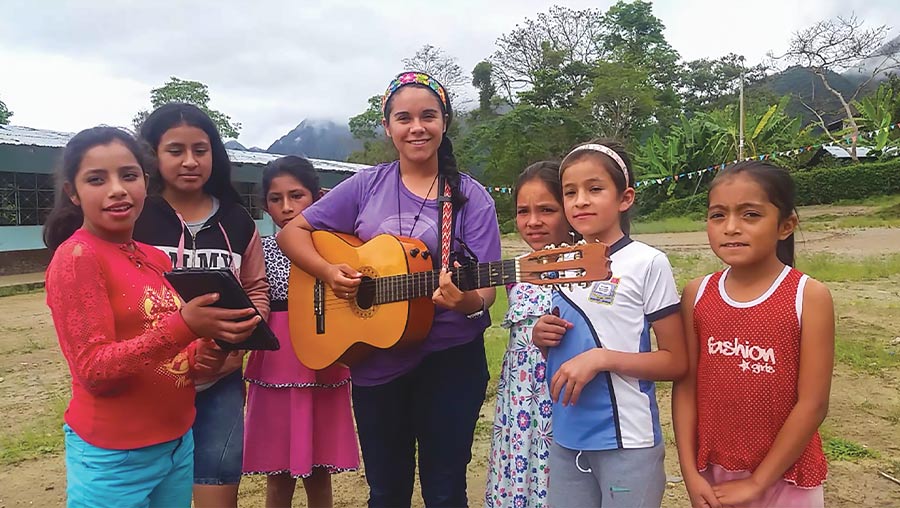 Gabriel, now 12, and Julianna, 19, have developed their own ways to serve God through the friendships they have made.

Gabriel has become a lector and altar server and has trained about 10 other youth to serve at Mass. Children of all ages come to play at their home, and Gabriel developed what he calls his “clean water ministry” for his guests, providing them with drinking water and a cup for their exclusive use.

Since completing her home-schooled education, Julianna has taken three semesters of college online while maintaining close relationships with the young women of the pueblo. She’s currently discerning joining Family Missions Company as a single adult missionary.

Mission work has come with challenges, Del Castillo conceded. The largest obstacle may have been the smallest — the mosquito. Not merely an annoyance, the tiny pests infected all three with mosquito-borne illnesses, which left them “super sick” and caused Karen’s hair to fall out temporarily.

Learning the language was another struggle, as Karen went to Peru speaking some Spanish but was not fluent. Gabriel said he arrived knowing two words: “sí” and “no.”

“Now we’re by no means perfect, but Christ has taken care of the rest,” said Del Castillo. Before she leads worship or teaches, she prays that the Holy Spirit will help people understand what she is saying.

“The best language you have is the language of love….I’m not a very good public speaker, and somehow I have to do that, but Christ works with what you have,” she said.

Stepping into a culture that blends Christianity with the ancient beliefs of their ancestors has not been easy.

When the locals want to sacrifice animals or call on other spirits for healing, “it isn’t easy,” she said. “For us it’s hard to understand, but we can’t be frustrated, we have to have a loving hand and teach them and be true to our Catholic faith.”

Along with the challenges have come joys, including a visit from the local bishop, who visited the pueblo for the first time in more than a decade and confirmed more than a dozen people whom Del Castillo prepared for the sacrament.

Soon, Karen will serve as the team leader for two single missionaries who will join them in Cajaruro, enabling a greater reach into the pueblos.

The extra hands may help with a special project the Holy Spirit has placed on Karen’s heart.

“We were blessed to have seen, through prayer, an opportunity to have a place for single mothers and their children,” she shared. When presented with the idea, Family Missions Company encouraged the proposal.

She discussed the possibility with the local priest, who said he was “bombarded” with the great needs of single women in the community and had prayed for a means to help.

Working together, they secured land at a reduced price in December and plan to build a cluster of one-room homes for single women and their children, “for them to come and heal and walk with us in the footsteps in the Lord,” she described.

“An area for them to encounter Jesus.”

She envisions a community center for the families to attend Bible studies, to gather for worship, and to eat meals together. Perhaps religious sisters can offer classes, Del Castillo dreamed.

With a grand plan and new people awaiting them, Del Castillo and Gabriel returned to Peru following a December – January visit to the U.S., their first in 34 months.

Karen said, laughing, “Our two-year commitment came and went. We’re discerning — are we going to stay in missions? We’re set. We’re definitely feeling the call. Lord, show us the way.”