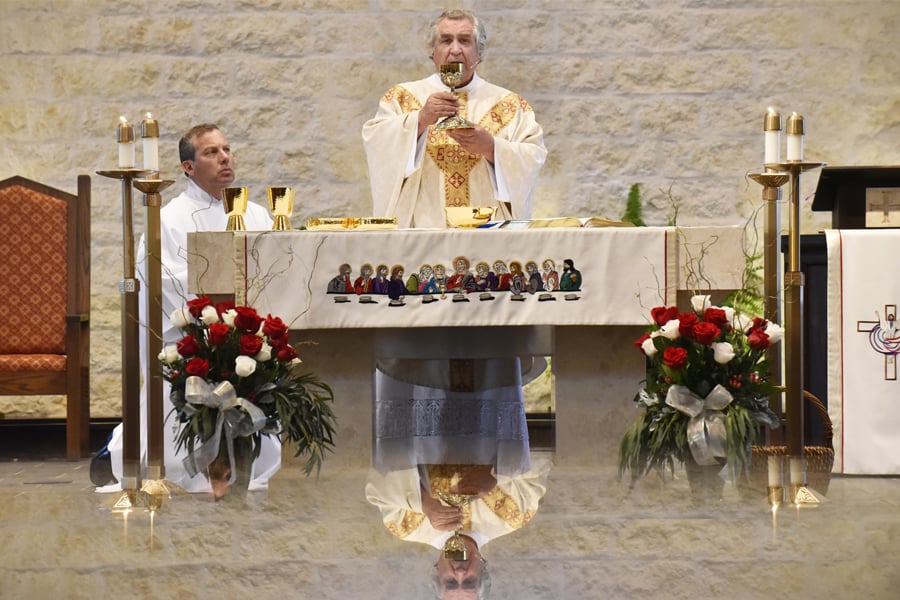 At Holy Redeemer Parish in Aledo, Msgr. Publius Xuereb says the Eucharistic Prayer during a Mass celebrating his 50th anniversary as a priest, May 6. (NTC photo/Ben Torres)

ALEDO — The reasons why Holy Redeemer parishioners love and respect their pastor, Monsignor Publius Xuereb, are as plentiful as the wildflowers that spring up near the rural Aledo church each May.

“He brings a smile to everyone’s face,” observed Natalie Touchet, a middle school student and altar server who admires how hard the priest works to keep the busy parish running smoothly.

Longtime religious education volunteer Amber White said everything Msgr. Publius does is from the heart. “He never has a cross word to say and is so welcoming,” she added. “He makes me happy to come to church.”

For Betty Alexander, the 74-year-old monsignor is the perfect balance of serious catechist and jovial friend.

“Of all the priests we’ve ever encountered throughout our lives, he’s the only one that sends out a letter every year at Christmastime,” the parishioner said. “He always knows who you are and calls you by name.”

There’s an anecdote she likes to share that demonstrates the pastor’s cheerful view of the world. It’s a lighthearted quip about the growing community of Aledo, west of Fort Worth, that’s still home to plenty of ranches and farmland.

“This is the only church I’ve been to where I can look out the window and see cattle grazing. They are the best Catholic neighbors I’ve ever had!” the monsignor likes to jest.

And that’s what people like about him, Alexander explained.

“He’s just a down-to-earth priest who’s not afraid to joke around you,” she continued. “At the same time, he’s serious when he needs to be. I’m not surprised to see all the people here today to wish him well.”

Alexander and her husband, W.R., were among the more than 500 parishioners and friends who turned out for a May 5 celebration honoring Msgr. Publius on the 50th anniversary of his ordination to the priesthood. The festivities included a catered luncheon in the parish hall and a Jubilee Mass with the special hymns, “Ave Maria” and “Panis Angelicus” sung by guest vocalist Michele Baker. As a prelude to the liturgy, worshippers listened to the prayer-like national anthem of Malta, the monsignor’s homeland, as a video screen displayed scenes from the island country in the Mediterranean Sea where he grew up.

During the homily, the monsignor thanked the congregation for their support and spoke emotionally about his late parents, Nicholina and Francis Xuereb. The couple raised 11 children on the rural island of Gozo after their home on the main island of Malta was destroyed during World War II.

“Thank you God for these 50 years and I thank my family and parents,” Msgr. Publius said to the gathering. “It is because of them that I am a priest.”

Neither parent could read or write but that didn’t prevent them from teaching by example the importance of hard work, faith, and serving God. The monsignor’s father was a merchant who traveled between islands with his boat to sell goods. Known for an outstanding memory, the elder Xuereb was the first man to own a Ford truck on Gozo.

“He was a successful man although he only knew numbers,” his son said proudly.

Named for his maternal grandfather, the priest also shares a name with the first bishop of Malta — a Roman governor who converted to Christianity after meeting St. Paul. Although rarely heard in the U.S., the name “Publius” is common in his native country, the monsignor told his listeners.

“My mother named me after her father so I was her favorite son and I took advantage of that every day,” he said to the congregation, who responded with laughter.

But Nicholina Xuereb gave her son another lasting gift. As a child in Malta, the jubilarian remembers accompanying his mother to St. Joseph Church to hear daily Mass celebrated in Latin. Too young to receive the host himself, the youngster would listen to his mom whisper the Anima Christi after Communion.

The 14th century prayer is still widely recited today as a post-Communion meditation.

“Seventy years later, I say this same prayer, in the same language whispered by my mother,” the monsignor said, using the memory as a teaching moment. “Parents, this is the power of prayer when you pray with your children!”

The Xuereb children always recited the Rosary before bed and the parish priests were friends of the family.

“Priests aren’t perfect but my mother and father never complained about the priest in front of the children,” he added. 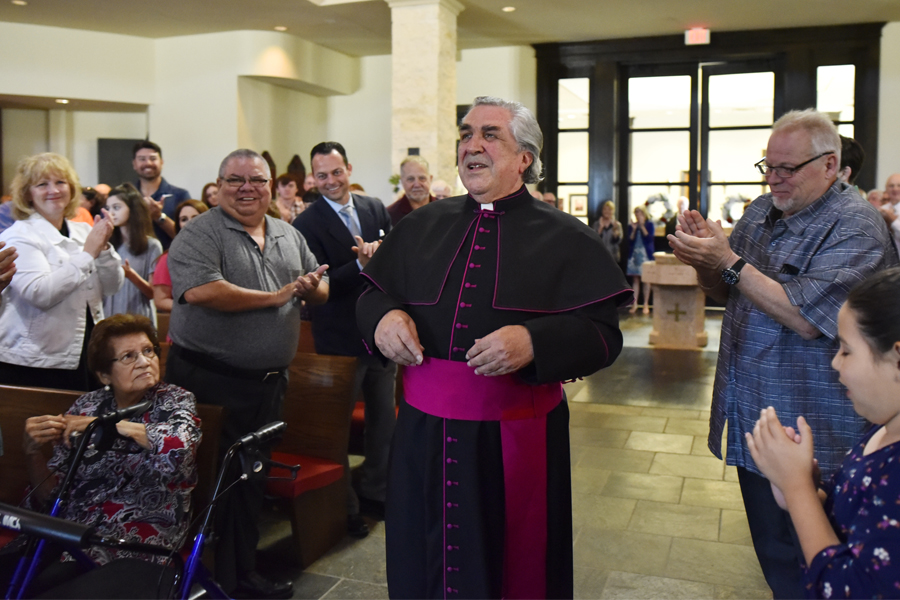 Msgr. Publius Xuereb is congratulated by parishioners after celebrating his 50th anniversary as a priest during a special Mass at Holy Redeemer Parish in Aledo, May 6, 2018. (NTC photo/Ben Torres)

Hearing God’s call at an early age, the future priest enrolled in a local seminary and was ordained on May 11, 1968 along with 30 other seminarians. Three are deceased but he remains in contact with many of his other classmates still working in Italy, Brazil, Argentina, the U.S. Army, and Malta.

His first post-ordination assignment was at an orphanage in Gozo where he ministered to children ranging in age from a few weeks old to 25.

“You had to be both father and mother to these children. It was the best time in my life,” explained the priest who would often take the orphans home to visit his mother.  “My mother loved the children and I still keep in touch with some of them.”

A chance meeting with Fort Worth’s first bishop, John J. Cassata, in 1969 brought the young priest to North Texas. The pair met at an event that established the Diocese of Fort Worth after being part of the Diocese of Dallas for almost 80 years. Fr. Publius was visiting his brother in Dallas at the time.

Bishop Cassata, whose parents were from Sicily, felt a cultural connection with the visitor from Malta and suggested he transfer to Fort Worth. Since then, the industrious priest has served as assistant pastor or pastor at 11 different parishes in the diocese including Our Lady Queen of Peace in Wichita Falls, St. Thomas Aquinas in Pilot Point, and Holy Cross in The Colony.

In 2012, the Holy Redeemer pastor received the papal honor of monsignor from Pope Benedict XVI for his service to the Church. The announcement came on the anniversary of his mother’s death.

“I know my mother had something to do with it. The timing could not have been better,” he told the North Texas Catholic at the time.

As he prepared to celebrate 50 years in the priesthood, Monsignor Publius was frequently asked the same question: What do you like most about being a priest?

The pastor cited a recent Baptism as one example. While the family gathered for the ceremony, the grandmother reminded Msgr. Publius that he baptized the baby’s father and also gave him first Communion while assigned to St. Peter the Apostle Parish. Eight years ago, he married the baby’s parents at Holy Redeemer and now would baptize their child.