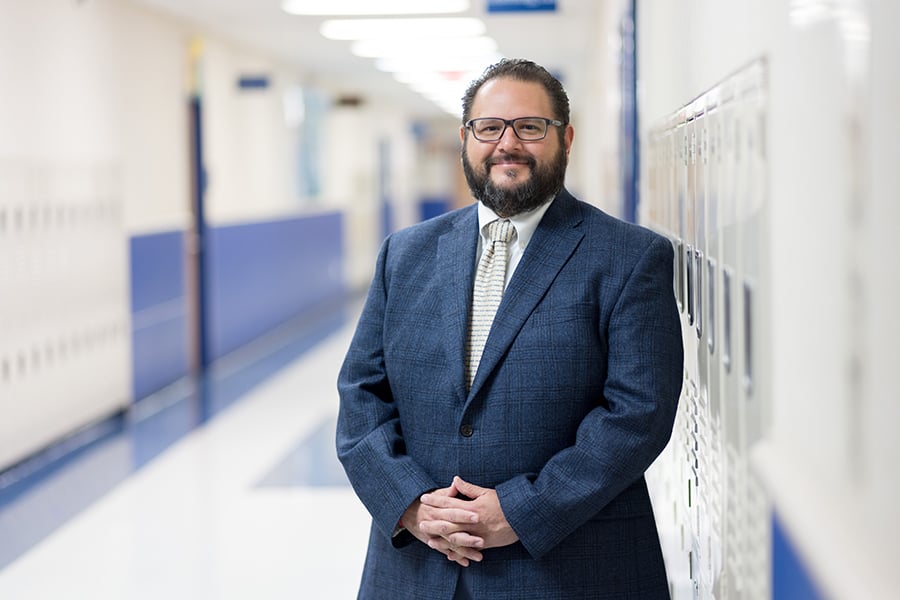 DENTON — As the new principal at Immaculate Conception Catholic School in Denton, Frank Perez is looking forward to building on the school’s foundation of excellence.

“The vision for me is to continue the great things that have happened at ICC,” Perez said.

Although his background is in public education, Perez is very familiar with the school at Immaculate Conception Church. He and his wife have been parishioners there since moving to Denton more than a decade ago when friends invited them to the 4 p.m. Mass.

“I was moved to tears, and it just felt like home,” he said.

As an educator in Denton ISD — most recently as an assistant principal at Denton High School — Perez made friends with faculty members at ICC, helped with church youth retreats, and volunteered to help teach children’s catechesis.

After a hard week at work not long ago, Perez half-jokingly asked Father Jason Allan, the parish’s parochial vicar, “Are you ever going to have a spot for me at ICC?”

He recalled that Father Allan told Perez he’d keep him in mind.

Fast forward some months later, and the principal spot at the parish school was open, and Perez applied.

Brinton Smith, superintendent of schools for the Diocese of Fort Worth, said Perez stood out to the hiring committee.

“The more we talked to him, the more we saw how he was a good mission fit for Catholic classical education,” Smith said.

Perez’s involvement as a parishioner, along with his strong background in classical education and school administration, made a big impression. Perez also is bilingual, making him an asset to reaching out to the Spanish-speaking community.

Perez and his wife Larissa have three children, ages 11, 10, and 5, all of whom will attend ICC school.

Teaching the Catholic intellectual tradition to a new generation

Perez started as a seminarian, but after the first year decided he wanted to marry. A love of history and the Catholic intellectual tradition prompted him to pursue studies in philosophy. Perez credits Robert Wood, a UD philosophy professor, with helping inspire his love of liberal arts.

In his young adult years, UD was his home base for practicing his faith. He was part of the school’s choir, Collegium Cantorum, and sang in the monthly first Friday Mass.

After graduating, he worked first as a bilingual preschool teacher in Krum ISD, then as a middle school bilingual social studies teacher in Denton ISD before becoming an administrator.

Perez tried to bring liberal arts into public education but could only take it so far without the faith component.

He’s happy that he can openly tie his role as an administrator to his faith.

Perez wants to share how the Catholic intellectual tradition has been the foundation of Western classical and moral education for centuries. He aims to bring “the fullness of truth to the surface in a way that’s accessible now.”

As the first day of school approaches Aug. 11, Perez is learning as much as he can about the ICC school community.

“There’s a deep love for the school at the parish,” he said.

He and his staff are surveying families to find out their views on what they think is most important at the school.

Perez plans to keep the school’s positive momentum going while continuing the path the diocese has laid out for Catholic classical education.

He said, “I’m looking forward to getting to live out my faith with the people I serve: teachers, students, and families. We can pray and talk about the sacraments and the saints.”