Outdoor Stations of the Cross honor love and inspire meditation 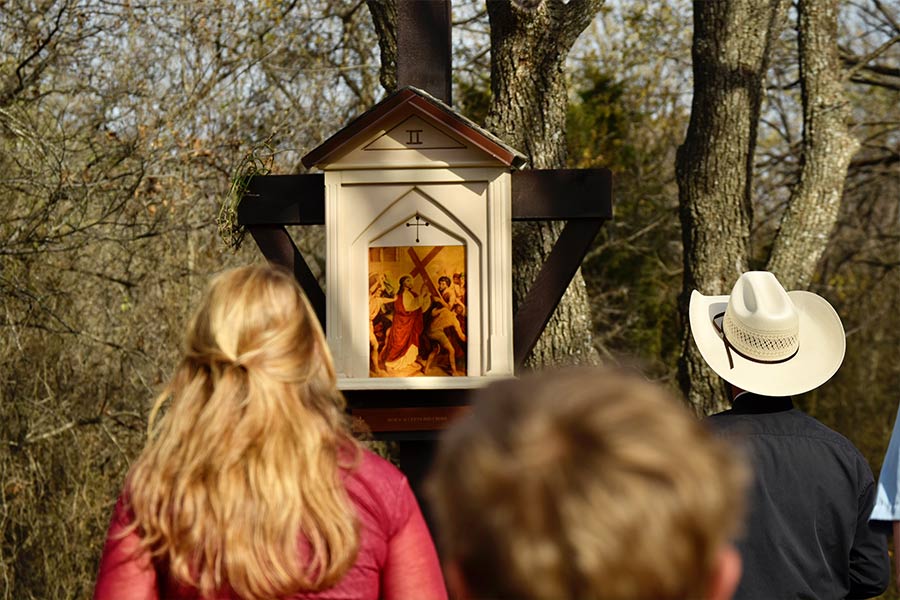 A group of parishioners visit the Stations of the Cross built by Sarah and Joseph Ehlen in the woods near Saint Jo. (NTC/Jacqueline Burkepile)

SAINT JO — After Sarah Ehlen’s husband converted to Catholicism on his deathbed in 2011, she traveled on weekends from her Dallas home to their 34-acre wooded property in Saint Jo, Texas.

Searching for healing amid grief, Ehlen discovered a way to honor her husband’s memory: building outdoor Stations of the Cross on the land they bought together 27 years ago.

“It was a massive undertaking,” Ehlen explained. “It was an offering to God because I felt blessed, even though I went through something difficult. I felt very blessed by his life. He was a very good father and husband.”

Ehlen then hired a carpenter, placed holy images of the Lord’s Passion on wood, and created a walking path on the land. She had each station handmade and placed near a tree, finishing the project in 2014.

“You feel like you are going on an adventure,” she said, adding that completing the walk takes approximately 45 minutes. “It’s like a story.”

Ehlen remarried in 2017. Her current husband, Joseph Ehlen, refurbished the stations last year, and the couple recently opened them to the public. Sarah then invited Father Joseph Keating, pastor of Sacred Heart Church in Muenster, to pray and bless them in 2021.

“I was struck by the artistry of not only the images themselves, but the craftsmanship that Joe put into the housings,” Fr. Keating said. “Walking through the wooded acreage made the experience feel like tracking, which had the effect of heightening my senses as I searched for each new station and meditated on the previous one.”

Fr. Keating also explained that walking between each station allows more reflection time, like a “mini-pilgrimage.” He said outdoor stations “are the perfect mini-pilgrimage for anyone who cannot travel all the way to Israel.”

“The original Stations of the Cross in the streets of Jerusalem were set up for Christian pilgrims visiting the Holy Land who wished to walk in the very footsteps of Jesus,” Fr. Keating explained.

“The physicality of walking, plus the sight of the stations’ images, allows us to be transported in our minds and be spiritually united with Christ’s passion.” 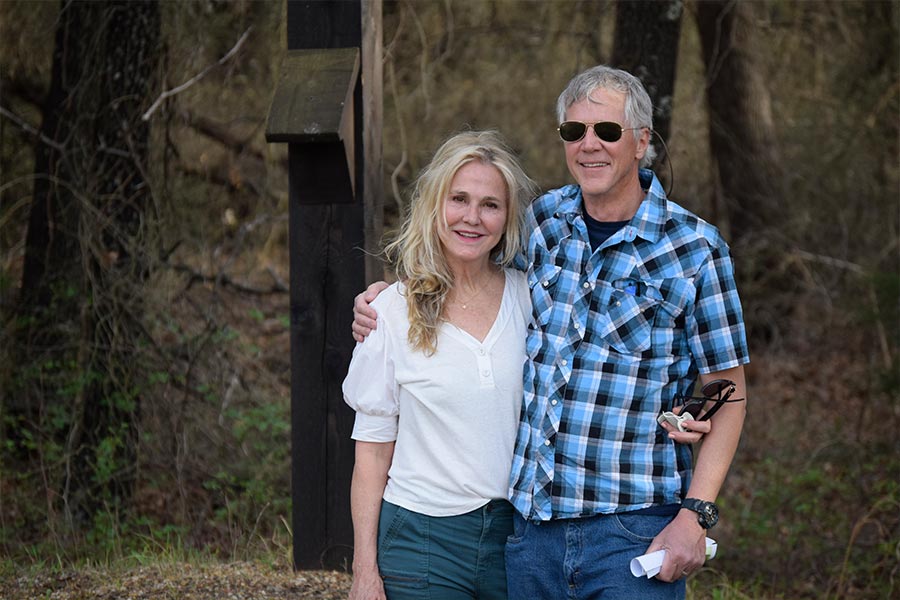 “It’s very peaceful and conducive for meditation; for having peace in this crazy world.” she emphasized. “The stations are like little pearls in the woods. It’s intriguing, especially for Catholics.”

Ehlen said she also equipped the property with a rental bunk house and barn loft, which attracts visitors of various backgrounds and faiths.

She explained that the stations “blow away” Christians throughout the community. One fallen-away Catholic returned to Mass after visiting the property.

Terri Kinsella, a longtime friend of Ehlen’s and a parishioner of St. Catherine of Siena Church in Carrollton, said Ehlen has a “far-reaching impact” on the community.

“Sharing her Catholic faith with visitors is very important to her. This pays tribute to Scott’s deathbed conversion, while giving glory to God,” Kinsella said. “Visitors feel God’s love, peace, and serenity through Sarah’s hospitality and the beauty they experience.”

Kinsella also said that regardless of religious affiliation, Ehlen’s visitors see Catholicism in her and throughout the property.

“They may not be Catholic, but she exposes them to the faith through the illuminated wooden cross by the pond, the Stations of the Cross on the path, and the crucifix on the walls of the rooms,” she said. “Most importantly though, Sarah spends time with each of her guests and naturally shares her faith with everyone.”

The Ehlen family said the Stations of the Cross are open to the public with prior notice.