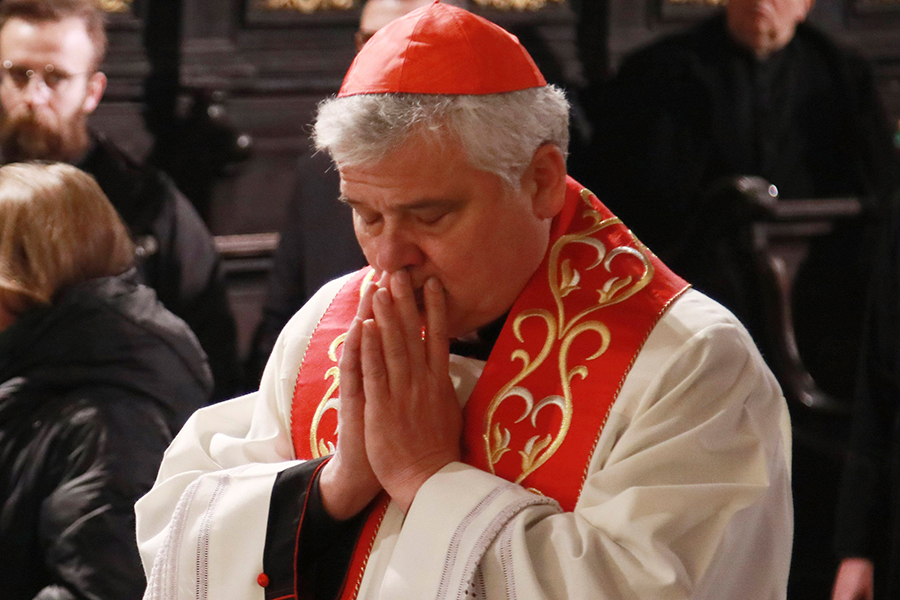 Cardinal Konrad Krajewski, the papal almoner, prays during an interreligious prayer service in the Latin-rite cathedral of Lviv, Ukraine, in this March 10, 2022, file photo. Cardinal Krajewski said he and several others came under gunfire while delivering aid in the Ukrainian city of Zaporizhzhia. (CNS photo/courtesy Ukrainian Catholic Church)

VATICAN CITY (CNS) — Standing near a mass grave site in eastern Ukraine and seeing the delicate and solemn removal of bodies, Polish Cardinal Konrad Krajewski, papal almoner, said he could only pray.

"I knew I would find so many dead, but I met men who showed the beauty that is sometimes hidden in our hearts," Cardinal Krajewski said after visiting the mass grave in the northeastern city of Izium.

"They showed a human beauty in a place where there could have only been revenge. Instead, there wasn't," he told Vatican News in an interview published Sept. 19.

Russian forces fled the area after Ukraine launched a counteroffensive to regain occupied territory. In a forest near Izium, soldiers found a mass grave site with the remains of an estimated 500 people.

Ukrainian President Volodymyr Zelenskyy, in a video message, said investigators saw evidence that some of the victims had been tortured.

Cardinal Krajewski, who was accompanied by Ukrainian Bishop Pavlo Honcharuk of Kharkiv-Zaporizhia, said the careful removal of the bodies in Izium seemed like a solemn liturgy.

"There was one thing that touched me so much," he told Vatican News Service. "These young Ukrainians were pulling out the bodies so gently, so quietly, in total silence. It looked like a 'celebration'; nobody was talking but there were so many policemen and soldiers there — at least 200 people. All in silence, with an incredible appreciation for the mystery of death. Truly there was so much to learn from these people."

Noting that the workers removed the bodies as if they were doing it "for their own families, for their parents, children, siblings," Cardinal Krajewski said that he and Bishop Honcharuk could only watch and pray.

"The bishop and I were walking around among them. I was reciting the Divine Mercy Chaplet the whole time; we were there for at least three hours. I couldn't do anything else," he said.

"This is what has stayed with me now that I'm back in Kharkiv. I am in the chapel and think about these young people," he said.

In an interview with Vatican News published Sept. 17, Cardinal Krajewski said he and several others came under gunfire while delivering humanitarian aid to suffering Ukrainians on Pope Francis' behalf.

The Polish cardinal was delivering goods in the southeastern Ukrainian city of Zaporizhzhia with a Catholic bishop, a Protestant bishop and a Ukrainian soldier when the attack occurred.

"For the first time in my life, I didn't know where to run because it's not enough to run. You have to know where to go," the cardinal said.

The cardinal and those with him managed to escape the attack and continued delivering goods loaded in a minibus.

The Dicastery for the Service of Charity announced Sept. 9 that Cardinal Krajewski would embark on his fourth trip to Ukraine and visit Odesa, Zhytomyr, Kharkiv and other locations in eastern Ukraine.

The purpose of his visit, the dicastery said, was to provide support to "various communities of faithful, priests and religious, and their bishops, who for more than 200 days continue to remain in the places of their ministry despite the dangers of war."

"It is a silent and evangelical trip to be with the people who are suffering, praying and comforting each of them, showing with his presence that they are not alone in this situation that is only bringing destruction and death," the statement said.

Speaking by telephone with Vatican News, Cardinal Krajewski noted that his visit to Ukraine coincided with the ninth anniversary of his episcopal ordination and his appointment as papal almoner.

The cardinal said he spent the day loading a minibus with provisions and rosaries blessed by the pope and delivering them to people in areas where "no one besides soldiers enter anymore."

Witnessing the devastation of war in the country on the day of his anniversary, Cardinal Krajewski told Vatican News that it was a "day without mercy" in which "there are no tears nor words."

"We can only pray and repeat: 'Jesus, I trust in you,'" the cardinal said.