Seminarian Austin Hoodenpyle kneels before the altar in humble prayer and Adoration of the Most Blessed Sacrament at St. Philip the Apostle Parish in Lewisville. (NTC/Kenneth Munyer)

LEWISVILLE — Austin Hoodenpyle can’t imagine formation to become a priest without experiencing a pastoral year. After completing his philosophy studies, then enrolling in the Theological College at Catholic University of America in Washington, D.C., for theology studies, the 26-year-old moved to Lewisville in June to become entrenched in parish life at St. Philip the Apostle.

Designed to show how a priest balances ministry with administrative work and outreach to the community, a pastoral internship for seminarians offers added lessons in 2020. The ongoing COVID-19 pandemic has taken an emotional toll on people with many feeling anxious, isolated, and fearful. Knowing how to shepherd parishioners toward the light of Christ when darkness seems all encompassing is a skill Hoodenpyle is learning.

“One of the challenges I’ve come across this year is taking what I learned in theology and philosophy and making it something that is fruitful for the people of God,” said the Catholic convert who grew up in Glen Rose, about an hour southwest of Fort Worth. “It’s one thing to be in the classroom thinking about real life scenarios and being in a real-life scenario and applying these principles.”

Hoodenpyle is one of 32 seminarians in the Diocese of Fort Worth. National Vocation Awareness Week, Nov. 1-7, is dedicated to promoting vocations to the priesthood, diaconate, and religious life through prayer, education, and support. More dedicated priests, deacons, and consecrated men and women will help the Church continue to thrive.

Father Matthew Tatyrek said the support of family and friends was important during his years of discernment. Ordained in 2016, he is now pastor of St. Peter Parish in Lindsay.

“People can increase vocations by encouraging, praying, and identifying young men in the parish whom they believe would be good priests,” said the pastor who also serves as a vocation liaison with the Vocations Office. “Teach them to pursue the will of God first and foremost.”

A special collection for the Diocesan Seminarian Education Fund, planned for weekend Masses Nov. 7-8, will help defray the $50,000 cost of educating a young man in formation for one year. 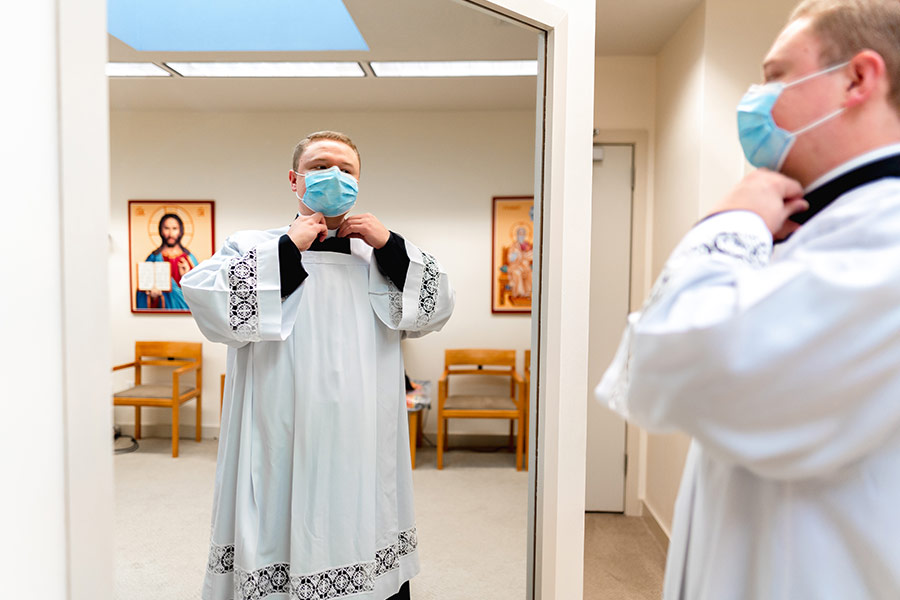 Seminarian Austin Hoodenpyle gets vested prior to Mass. (NTC/Kenneth Munyer)

During his year away from the classroom, Hoodenpyle is enthused to witness firsthand how a parish operates.

“Normally, seminarians are out and about in the diocese doing a number of things,” he pointed out. “The pandemic allowed me to observe how the administration and staff worked together with the pastor to make the adjustments needed to keep people safe.”

Barred from public worship for weeks because of health concerns, parishioners were pleased to attend Mass once again.

“People were glad to be in the church and receive the sacraments, especially those people with anxiety and troubles,” the visiting seminarian said. “It was a great comfort to them.”

For those unable to attend Mass, Hoodenpyle donned a mask and gloves to bring Communion to the homebound.

“It’s humbling to realize what I’m bringing to that person and what it represents to them,” the seminarian explained. “It brings me a lot of peace and is something I want to continue doing for the sake of those people.”

Witnessing the reverence Catholics show the Eucharist is what drew Hoodenpyle to the faith as a teenager. The only child of his mother, who was raised Catholic, and his father, a Baptist, he attended a Methodist church with them and was confirmed in the eighth grade.

Visiting his maternal grandmother in Chicago gave him the opportunity to step into a Catholic church for the first time.

“Going to Mass changed my life,” remembered Hoodenpyle, who was already a devout churchgoer. “The prayerfulness of the people and how seriously they took everything struck me. I’d never seen people kneel in church and treat the Eucharist with such reverence.”

When he returned to Sunday morning services at his Methodist church, the teenager felt something was missing. After studying Catholicism on his own, the high school sophomore joined the youth group at St. Frances Cabrini Parish in Granbury and entered the Church at the 2011 Easter vigil.

The decision to enter the seminary in 2013 didn’t surprise his parents, Kelly and Brent Hoodenpyle.

“They were amazed with the seminary program and the human, intellectual, pastoral, and spiritual formation that happens,” Hoodenpyle said. “They were happy that I was happy.” 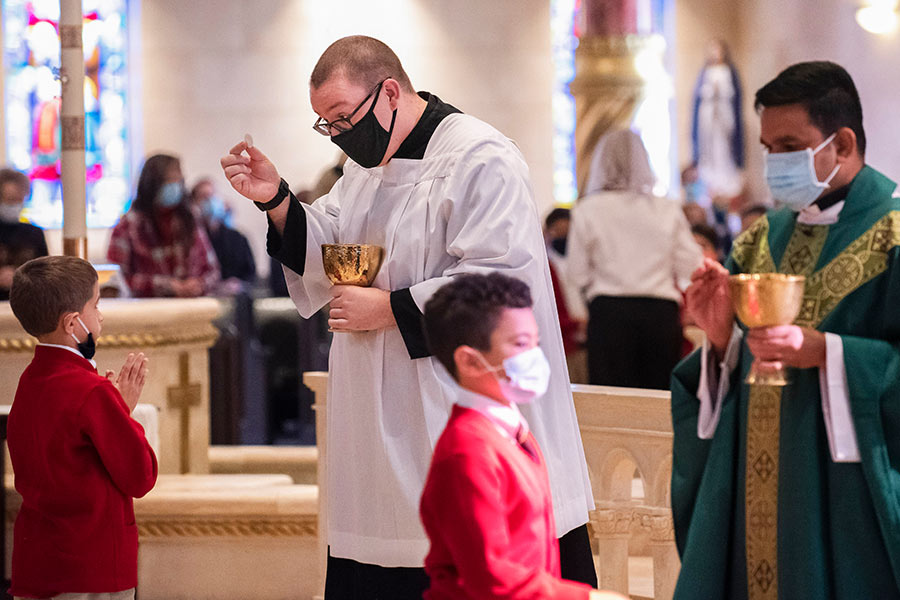 As a young boy, Brandon LeClair kept a mental list of professions he might want to pursue in life: a teacher, police officer, chef, or priest.

After graduating from Mansfield High School, he attended Tarrant County College for several years to explore the first three options. The undergraduate took courses in criminal justice and then in culinary arts, earning certifications in food preparation and basic cooking.

“I went through those paths first but, as I went through life, I kept hearing the call to become a priest over and over again. It was on my mind and heart.”

His pastor directed him to the diocesan Vocations Office and the St. Jude parishioner entered St. Joseph Seminary in 2015.

“My dad grew up in a Catholic family with six brothers. His mother always wanted one of them to become a priest, but none did,” LeClair explained. “It skipped a generation.”

His grandmother is deceased, “but I’m sure she would have been pleased,” he added. His parents, Ed and Tonya LeClair, are supportive.

After two years of theology studies at Assumption Seminary in San Antonio, LeClair arrived at St. Elizabeth Ann Seton Parish in September for his pastoral year. The large Keller parish with a weekly pre-COVID Mass attendance of 9,000 differs greatly from the small, rural parishes in Seymour and Megargel where he spent his first summer as a seminarian.

“It’s really good to experience different parts of the diocese — both the rural and the urban,” he continued.

In addition to normal administrative work and serving at Mass, the soon-to-be 27-year-old accompanies the parish’s priests on home visits and hospital calls. Their presence is a sign of stability, hope, and compassion during the current health crisis. 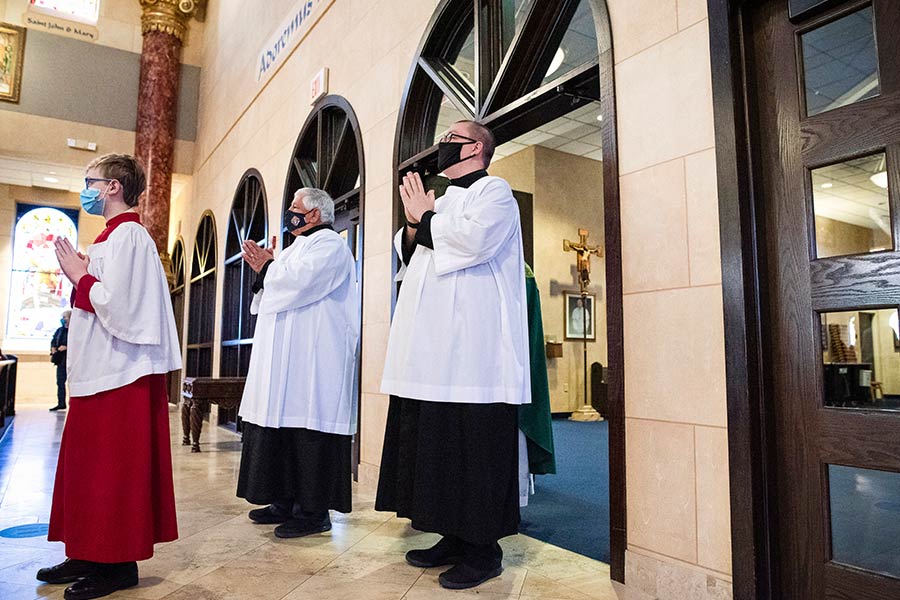 “I think it’s bringing people the sacraments but also just being with them,” LeClair said. “It’s helping them build a relationship with Christ.”

The servant priests at St. Elizabeth Ann Seton are worthy role models in that regard.

“They’re here for the parish and bring people to Christ by actually getting to know parishioners,” the seminarian added. “That’s really going to stick with me in the future.”