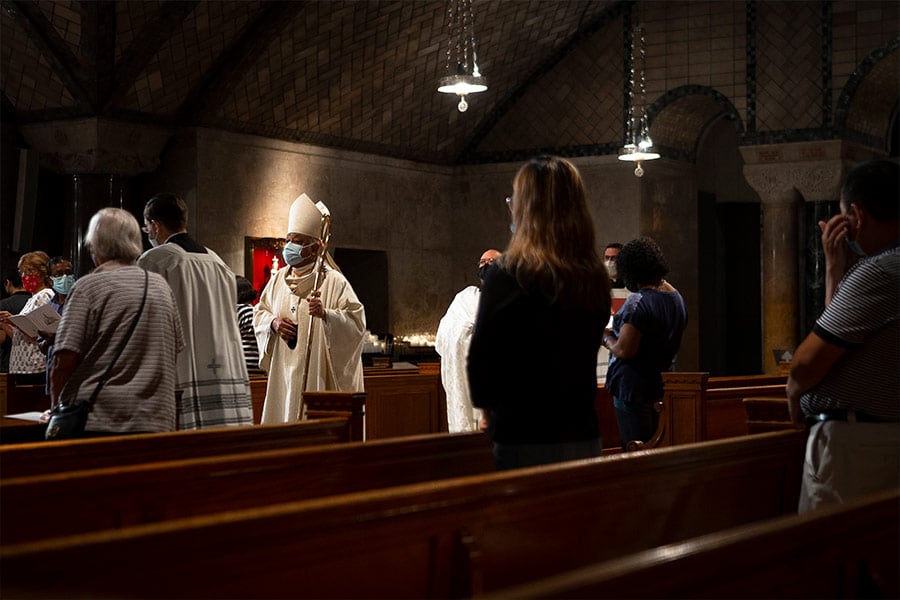 Washington Cardinal Wilton D. Gregory processes into Mass in the Crypt Church at the Basilica of the National Shrine of the Immaculate Conception in Washington Sept. 16, 2021. The percentage of Catholics in the U.S. population in 2021 held steady at 21% in the latest Pew Research Center survey, issued Dec. 14. (CNS photo/Tyler Orsburn)

WASHINGTON (CNS) — The percentage of Catholics in the U.S. population in 2021 held steady at 21% in the latest Pew Research Center survey, issued Dec. 14.

The percentage of Protestants, however, dropped, while the percentage of "nones" — those who profess no particular denominational attachment — continued to rise, said the report, "About Three-in-Ten U.S. Adults Are Now Religiously Unaffiliated."

The survey results also indicate the proportion of Christians in the U.S. population continues to slide. A decade ago, they constituted 75%, or three out of every four Americans. In the new survey, that percentage is down to 63%, or five out of every eight Americans.

"Christians now outnumber religious 'nones' by a ratio of a little more than 2-to-1," the report said. In 2007, when Pew began asking its current question about religious identity, the ratio was almost 5-to-1, or 78% vs. 16%.

Since 2007, Protestantism has dwindled from 52% of all Americans to 40%, not quite twice the percentage of Catholics today. Within Protestantism, the percentage of those adults who profess evangelical or "born again" Christianity has shrunk by 6%; the number of those who are not evangelical or "born again" also has shrunk by 6%.

The dip in the percentage of Catholics is less pronounced; it was 24% in 2007 and 14 years later is 21%. The Orthodox churches make up about 1% of Americans, and members of the Church of Jesus Christ of Latter-day Saints comprises 2%.

So too are those who consider themselves "very" religious. Fifty-eight percent of Americans had described themselves that way in 2007. Now, just 41% do. The number of those who feel "somewhat" religious has drifted downward from 28% in 2007 to 25% today. But those who say they're either "not too" or "not at all" religious has more than doubled over the past decade and a half, from 16% to 33%.

The trend lines maintained themselves on the religiosity question even after Pew switched from a random-digit-dial protocol to find survey respondents, which ended in 2019, to its National Public Opinion Reference Survey, which debuted in 2020.

Thirty-five percent of Catholics say they go to Mass at least monthly, with Hispanics outpacing whites, 36% to 33%. But those numbers are dwarfed by the 46% of Protestants who say they attend services at least monthly.

Catholics straddle the halfway mark about how often they pray — 51% say they pray daily — while 48% say religion is very important in their lives. Of this 48%, 54% of Hispanic Catholics say this is true for them, vs. 41% of their white counterparts.

While a combined 29% of those surveyed profess no specific religious identity, the percentage of those who say they're "nothing in particular" (20%) is more than double the combined percentage of atheists and agnostics (9%).

Editor's Note: The Pew report "About Three-in-Ten U.S. Adults Are Now Religiously Unaffiliated" can be found online at https://pewrsr.ch/3F3Ix22.