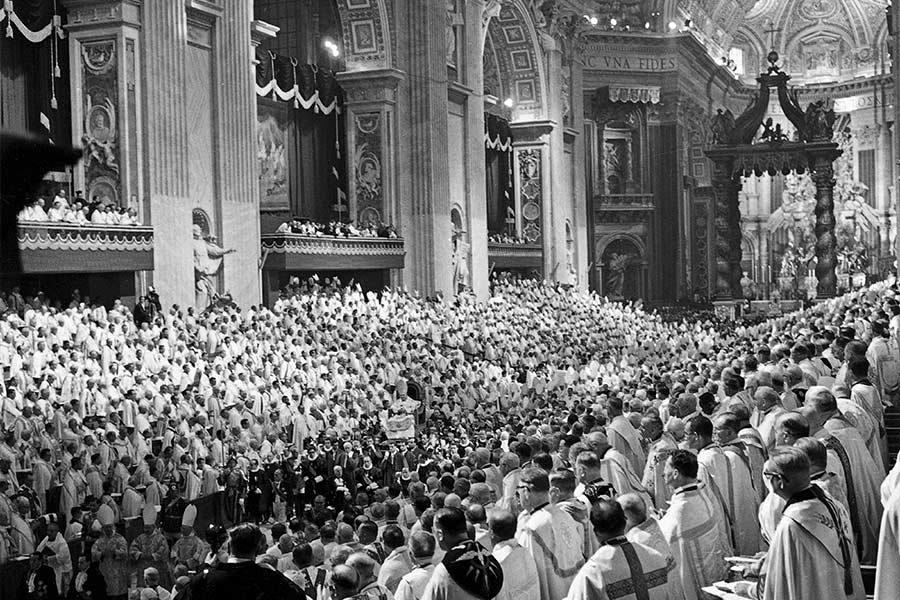 A photo taken of the interior of St. Peter's Basilica during the Second Vatican Council.

VATICAN CITY (CNS) — Before celebrating the Holy Year 2025, Pope Francis is asking Catholics around the world to dedicate time in 2023 to studying the documents of the Second Vatican Council.

Presenting the official logo for the Holy Year June 28, Archbishop Rino Fisichella also announced the pope's plan for helping Catholics prepare for the celebration: focusing on the four constitutions issued by Vatican II in 2023; and focusing on prayer in 2024.

Archbishop Fisichella, whom the pope appointed to coordinate planning the Holy Year, said, "A series of user-friendly resources, written in appealing language, are being produced to arouse curiosity in those who have no memory" of the council, which was held 1962-65.

Details about the 2024 year of prayer and spiritual preparation for the jubilee are still being worked out, the archbishop said.

The Vatican already had announced that Pope Francis chose "Pilgrims of Hope" as the theme for the Holy Year.

Held every 25 years since 1470, a holy year or jubilee is a time of pilgrimage, prayer, repentance, and acts of mercy, based on the Old Testament tradition of a jubilee year of rest, forgiveness and renewal.

In February, the Vatican announced a worldwide competition to design the logo for the Holy Year, and Archbishop Fisichella unveiled it June 28 during a conference in the Sala Regia of the Apostolic Palace.

"A total of 294 entries were received from 213 cities and 48 different countries," he said in prepared remarks. "Participants ranged in age from 6 to 83. In fact, many hand-drawn designs were received from children from all over the world, and it was really moving to go through these drawings which were the fruit of imagination and simple faith."

A commission of "iconographers, graphic designers, art and brand experts, architects and some pastors" chose a design submitted by Giacomo Travisani, and Pope Francis approved it.

"The logo shows four stylized figures to indicate all of humanity from the four corners of the earth," Archbishop Fisichella said. "They are each embracing another, indicating the solidarity and brotherhood that must unite peoples. It should be noted that the first figure is clinging to the cross. The underlying waves are choppy to indicate that the pilgrimage of life is not always on calm waters."

Travisani, explaining the logo, said, "When I wanted to 'personify' hope I immediately had a clear image: the cross; hope, I told myself, is in the cross."

The four human figures are in different colors. Travisani said, "the red is love, action and sharing; the yellow-orange is the color of human warmth; green evokes peace and equilibrium; blue is the color of security and protection."