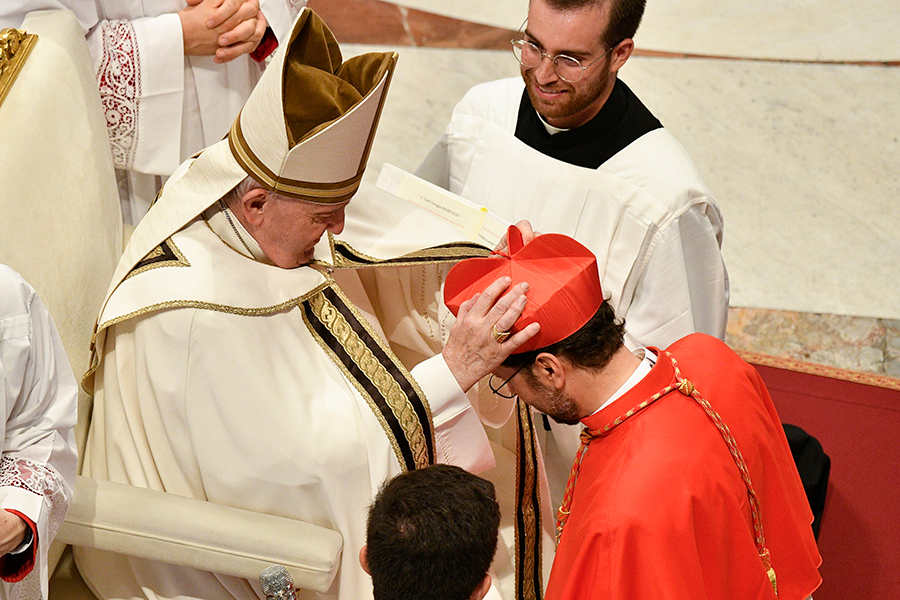 Pope Francis places the red biretta on new Cardinal Giorgio Marengo, apostolic prefect of Ulaanbaatar, Mongolia, during a consistory for the creation of 20 new cardinals in St. Peter's Basilica at the Vatican Aug. 27, 2022. (CNS photo/Vatican Media)

VATICAN CITY (CNS) — In a ceremony to create 20 new cardinals, Pope Francis encouraged the College of Cardinals to have the same spiritual zeal for all people, whether they are in positions of power or ordinary Christians.

"A cardinal loves the church, always with that same spiritual fire, whether dealing with great questions or handling everyday problems, with the powerful of this world or those ordinary people who are great in God's eyes," the pope said Aug. 27 during the consistory, a prayer service during which he personally welcomed 20 churchmen into the College of Cardinals.

Those who have this apostolic zeal are compelled "by the fire of the Spirit to be concerned, courageously, with things great and small," he said.

During the ceremony, each of the new cardinals, including Cardinal Robert W. McElroy of San Diego, California, professed their faith by reciting the Creed and formally swore fidelity and obedience to the pope and his successors.

They then approached Pope Francis, one by one, to receive their biretta, their cardinal's ring, and the assignment of a "titular" church in Rome, which makes them part of the Roman clergy.

In his homily, Pope Francis reflected on Jesus' words to his disciples, in which he declared, "I came to bring fire to the earth, and how I wish it were already kindled."

Focusing on the image of fire, Pope Francis said that the "flame of the spirit of God" represents his love "that purifies, regenerates and transfigures all things." It also evokes the charcoal fire made by the risen Christ for his disciples along the shore of the Sea of Galilee.

"That charcoal fire is quiet and gentle, yet it lasts longer and is used for cooking. There on the shore of the sea, it creates a familiar setting where the disciples, amazed and moved, savor their closeness to their Lord," he said.

Jesus' words, he continued, are also emblematic of the "fiery mission" entrusted to the newly created cardinals.

For those "who in the church have been chosen from among the people for a ministry of particular service, it is as if Jesus is handing us a lighted torch and telling us: 'Take this; as the Father has sent me, so I now send you,'" the pope said.

The fire of God's divine love is what also inspires countless missionaries who "have come to know the exhausting yet sweet joy of evangelizing, and whose lives themselves became a gospel, for they were before all else witnesses."

Recalling the life of St. Charles de Foucauld, the pope praised those Christians, both consecrated and lay, who live in secular environments, yet still are true Christian witnesses who keep the flame of God's love alive through their lives and actions.

The pope also recalled the example of Cardinal Agostino Casaroli, a full-time Vatican diplomat for decades who served as Vatican secretary of state from 1979 to 1990.

Despite his responsibilities, the pope said the late cardinal would find time to visit young inmates at a juvenile prison in Rome.

Concluding his homily, Pope Francis called on Christians to contemplate on "the secret of the fire of God, which descends from heaven, brightening the sky from one end to the other, and slowly cooking the food of poor families, migrants, and homeless persons."

"Today too, Jesus wants to bring this fire to the earth. He wants to light it anew on the shores of our daily lives. Jesus calls us by name; he looks us in the eye, and he asks: 'Can I count on you?'" the pope said.

The consistory brought to 226 the total number of cardinals in the world; 132 cardinals are under the age of 80 and eligible to vote in a conclave.

The 20 prelates who received their red hats from the pope were Cardinals:

— Arthur Roche, 72, prefect of the Dicastery for Divine Worship and the Discipline of the Sacraments.

— Lazarus You Heung-sik, 70, prefect of the Dicastery for Clergy.