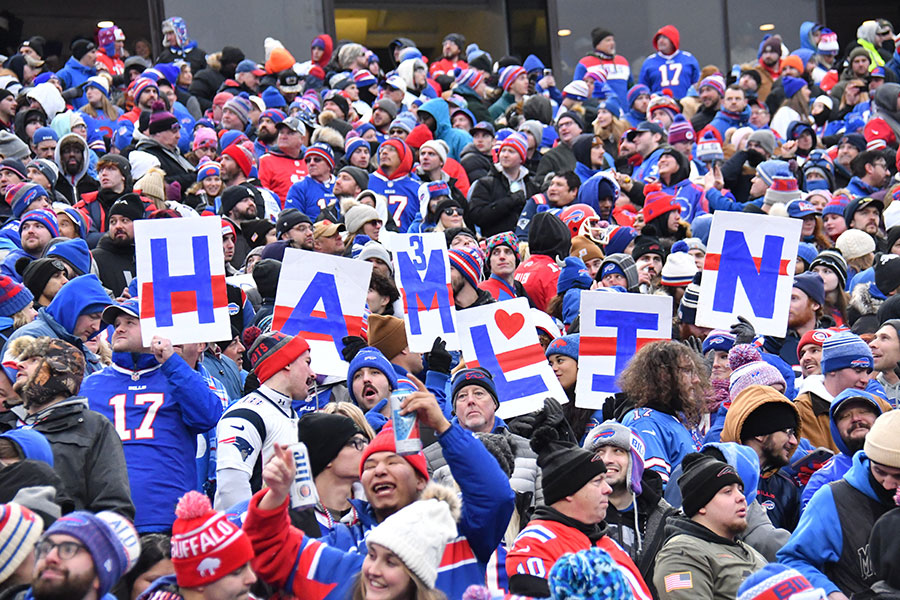 Fans show support for Buffalo Bills safety Damar Hamlin before a game against the New England Patriots at Highmark Stadium in Orchard Park, N.Y. Jan. 8, 2023. Catholics are rejoicing in answered prayers after Hamlin was released from a Cincinnati hospital in stable condition Jan. 9 after the Buffalo Bills safety nearly lost his life from cardiac arrest in a Jan. 2 NFL game. (OSV news photo/Mark Konezny-USA TODAY Sports via Reuters)

Hamlin, a safety for the Buffalo Bills, collapsed Jan. 2 after tackling Cincinnati Bengals receiver Tee Higgins during a routine play. According to a statement by the Buffalo Bills, the 24-year-old safety suffered a cardiac arrest following the hit.

Medics worked for 10 minutes to restore Hamlin's heartbeat as Bills team and staff members knelt in a tight prayer circle around him. Hamlin was admitted to the University of Cincinnati (UC) Medical Center, initially sedated and on a ventilator.

Over the next seven days, a national outpouring of prayer and support was rewarded by Hamlin's steady return to consciousness — one that saw him posting social media messages of gratitude and "cyber-cheering" his Bills teammates as they defeated the New England Patriots Jan. 8.

The following day, UC Medical Center doctors released Hamlin to the Buffalo General Medical Center/Gates Vascular Institute in Buffalo, New York, where according to an official statement he is listed in stable condition and "continues to make significant progress in his recovery."

Cook, along with Central Catholic president and Christian Brother Mike Andrejko, joined dozens at an afternoon vigil hosted by the Sto-Rox Junior/Senior High School in McKees Rocks, where several speakers stressed the importance of prayer.

Noting Hamlin's ongoing commitment to the Central Catholic community — where he regularly returns to provide athletic mentorship — Cook said that "Damar has been filled with the grace of God."

Earlier in the week, Central Catholic students, faculty, staff, and administrators had gathered for a "healing service" at the school "to pray that Our Lord … would heal Damar and keep him safe," said Cook.

Those intercessions resounded across the country, as NFL teams and players put out calls on social media to "pray for Damar." On its Twitter feed, the NFL uploaded collages of player tweets urging prayer, including one by Hamlin's teammate, Bills tight end Dawson Knox, who said, "Prayer is real, and it’s powerful. Constantly praying for Damar and his family."

T-shirts with the plea have been issued, with proceeds for some benefiting Hamlin's charity, the Chasing M's Foundation.

Prior to their Jan. 7 game, players from the Tennessee Titans and the Jacksonville Jaguars knelt on the field to pray for Hamlin.

Hamlin, who frequently references his faith in his social media posts, tweeted on Jan. 7 that "the love is felt, & extremely real. No matter race or religion everybody coming together in prayer!"

Speaking at the Jan. 9 prayer vigil, Hamlin's uncle Dorian Glenn — who expressed the family's gratitude "for all the prayers that have been sent" — said his nephew's recovery was "definitely, definitely thanks to God."

"I think the lesson that I took from all of this is that we really got to see the power of prayer in full effect, and how coming together in love brought the nation together to pray for this young man," said Glenn.

As Hamlin journeys through his recovery, the Central Catholic community will "do everything we can to lift up Damar and his family in prayer," said Cook.

"Say it with me," he exhorted vigil attendees. "Prayer works."

By Gina Christian, a national reporter for OSV News.