Rebuilt from the ashes: The story of an American basilica 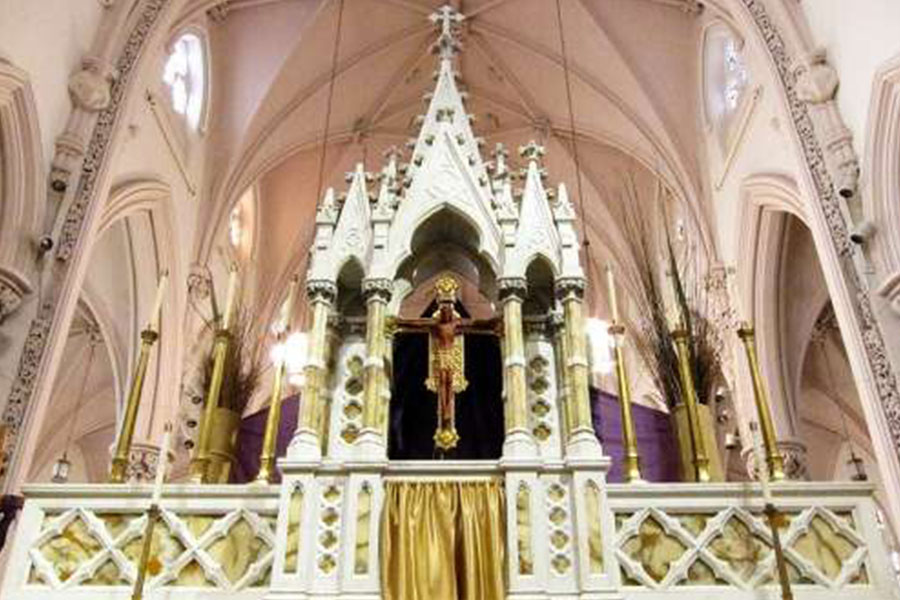 A crucifix at the Basilica of St. Mary of the Immaculate Conception in Norfolk, Virginia (CNA photo/Nheyob via Wikipedia Commons)

Norfolk, Virginia (CNA) — An immigrant parish, burnt down, with only the crucifix remaining. A parish rebuilt, transformed and a key part in giving back to the community. In a sense, one parish’s story of struggle, pressure and rebirth is metaphor for the American Catholic experience.

St. Mary of the Immaculate Conception in Norfolk, Virginia, is the only black Catholic church in the United States that is also a basilica. Its dramatic history captures both the broader American Catholic history of persecution, growth and acceptance, but also a witness to the unique challenges faced by black Catholics over the centuries.

Founded originally as St. Patrick’s Parish in 1791, it is the oldest Catholic parish in the Diocese of Richmond, predating the foundation of the diocese by nearly 30 years.

“Catholicism was not legal to practice” in Virginia when the colony was founded, said Fr. Jim Curran, rector of the basilica. In much of Colonial America, before the Revolution and the signing of the Bill of Rights, churches that were not approved by the government were prohibited from operating, he told CNA.

The land originally bought in 1794 for the parish is the same ground on which the basilica today stands. From the beginning, according to the parish’s history, Catholics from all backgrounds worshiped together: Irish and German immigrants, free black persons and slaves.

However, by the 1850s, the parish’s immigrant background and mixed-race parish drew the ire of a prominent anti-Catholic movement: the Know-Nothings.

Largely concentrated in northeastern states where the immigrant influx was greatest, the movement rose and fell quickly. Concerned with maintaining the Protestant “purity of the nation,” it worked to prevent immigrants — many of whom were Catholic — from gaining the right to vote, becoming citizens, or taking elected office.

“I consider the Know-Nothings to be a sort of gatekeeper organization, by which I mean that they were both anti-immigrant and anti-Catholic at the same time,” said Fr. David Endres, an assistant professor of Church History and Historical Theology at the Athenaeum of Ohio.

He told CNA that the Know-Nothing Party was able to bring together both pro- and anti-slavery voters in the mid-1800s, united in the common “dislike of foreign-born and Catholics.”

While most anti-Catholic activities took the form of defamatory speeches and public discrimination, the prejudice sometimes turned to violence and mob action, Fr. Endres explained.

The anti-Catholic discrimination and threats found their way to St. Patrick’s doorstep, where the Know-Nothings were unhappy that the pastor was allowing racially integrated Masses, said Fr. Curran.

The pastor at that time, Fr. Matthew O’Keefe, received so many threats directed against the church and himself that police protection was required to stop the intimidation of the Catholics worshiping at the church, according to the locals.

Despite the threats, however, Fr. O’Keefe did not segregate the Masses. In 1856, the original church building burned down, leaving only three walls standing. Only a wooden crucifix was left unscathed.

More than 150 years later, it is still unclear exactly who or what caused the fire, but since the days following the blaze, parishioners have had their suspicions.

“We don’t know for sure if they were the ones who burned it, but it’s widely believed, it’s a commonly held notion that it’s the Know-Nothings who burnt the Church,” Fr. Curran said.

Fr. O’Keefe and the parishioners worked hard to rebuild the church, seeking donations from Catholics along the East Coast. A new church building was constructed less than three years after the fire and is still standing today.

In 1889, the Josephites built Saint Joseph's Black Catholic parish to serve the needs of the black Catholic community, and the two parishes operated separately within several blocks of one another. However, in 1961, St. Joseph’s was demolished to make way for new construction, and the two parishes were joined, reintegrating — at least in theory — St. Mary of the Immaculate Conception.

But the merger was not popular with many of the white parishioners and conflicted with the segregation policies of local government institutions and public life, Fr. Curran said. “St Mary’s became a de facto black parish.”

During this demographic shift, many parishioners of St. Mary of the Immaculate Conception had to draw deeply upon their faith. Black Catholics had to be stalwart, facing prejudice from both some white parishioners, who did not view them as fully Catholic, and some black Protestants, who did not support their religious beliefs.

“They were devoted, and still are,” the rector said. “You have to be very devoted to be a black Catholic.”

This devotion and witness of St. Mary of the Immaculate Conception was formally celebrated when, in 1991, Saint Pope John Paul II elevated the 200-year-old church to a minor basilica.

“Your black cultural heritage enriches the Church and makes her witness of universality more complete. In a real way the Church needs you, just as you need the Church, for you are a part of the Church and the Church is part of you,” Pope Saint John Paul II proclaimed at the elevation.

Today, St. Mary of the Immaculate Conception plays a vital role not only as the only Catholic basilica in Virginia, but also as an important anchor of the neighborhood. The basilica operates a “robust” set of outreach ministries to local families, including rent assistance and food aid, serving thousands of people.

“The Church standing proudly and beautiful in the midst of the poor is where we need to be,” Fr. Curran said.