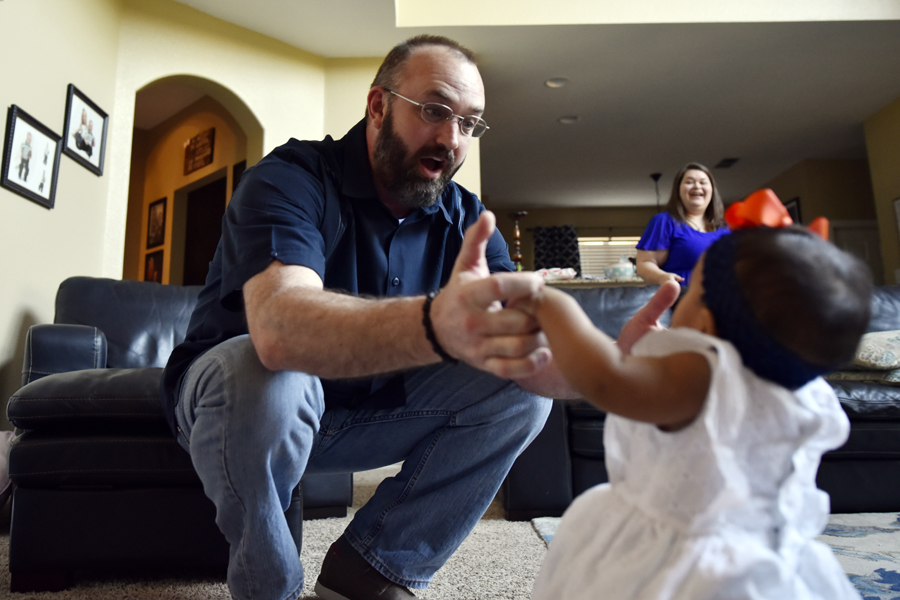 Robert Powell plays with one of his foster babies at the family home. (NTC photo/Ben Torres)

FRISCO — “I never know how many will walk through the door” quips Grandmother each time Kristi Powell and her family visit.

Her grandmother exaggerates, explained Powell. While it’s true that she and her husband, Robert, have been foster parents to more than 40 children and are raising three biological kids, they never have more than three bonus kids at a time. And most stay about a year, so the number doesn’t change frequently.

Powell said she first felt the call to foster “pretty sure the day I was born,” and she made certain her husband concurred before they married 25 years ago.

“When I love them, bathe them, clothe them, feed them, that’s as close as I can get to doing it to Jesus,” said the former elementary school teacher and principal.

Currently, all hands are on deck, with two babies in their care. “It takes a family to run a household,” Powell explained. Her daughter Whitleigh, 16, and sons Reid, 13, and Weston, 9, love babies and prepare bottles, change diapers, and give baths, in addition to laundry, cleaning, and other household chores.

Powell believes having foster siblings will make her children better parents one day. All three express the desire to foster children themselves.

Her children have learned lessons more important than the basics of childcare and household chores. Their mother said, “It’s taught them unconditional love. There’s so much prejudice in this world, from the color of your skin to your socioeconomic status, and my kids look past that.”

As for Powell, she has learned patience. They accept children with special medical needs, often due to prenatal drug exposure, like their two current babies. Therapists visit the house almost daily to promote the babies’ development.

When Kristi gets a call that a home is needed for a child, it tugs on her heart. But she and Robert have two ground rules – they both must agree to do it, and the children must be younger than their biological children.

Brooklyn was exposed to methamphetamines in the womb. An emergency delivery and six minutes of oxygen deprivation caused a stroke in the newborn. Would they take her?

A self-described “adrenaline junkie,” Kristi knew it would be difficult until the babies were sleeping through the night. She also knew that drug-exposed babies tend to be fussy and poor sleepers. She told her husband, “It will be rough for a while, but once they sleep through the night we’ll be okay.” Brooklyn left Parkland Hospital and entered their home. 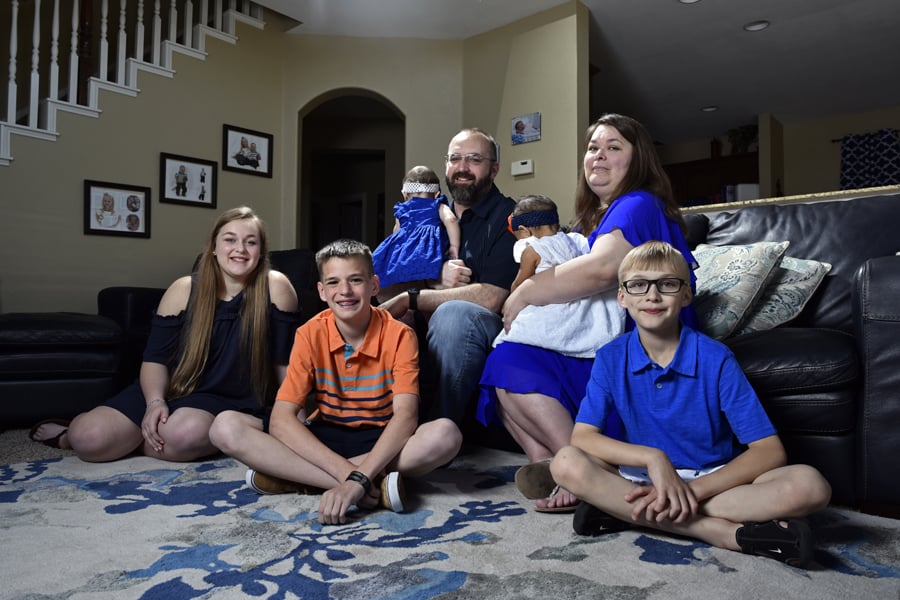 The St. Martin de Porres family has been fostering 18 years but plans for a first — they hope to permanently adopt Savannah. Her biological parents have given up custody of their other five children and are expected to do the same.

For Kristi, adopting Savannah would open the door to adopting a second child. “I would want her to have a sibling close to her in age so she doesn’t feel like an only child when my older children leave.”

Calling themselves mama and daddy, the Frisco parents shower their little ones with love. Powell admitted that it’s “hard when they go home. But God didn’t promise us our own kids forever. We just do it. No one is guaranteed a tomorrow,” she explained.

In many cases, communication between foster families and biological parents about routines and favorites helps make the transitions easier.

Those interactions keep Powell aware of how hard the birth parents work to get the kids back. Brooklyn’s mom has kept the Powells informed about her progress — getting sober, finding a job and housing. Plus, the birthmother asked the Powells to be godparents to Brooklyn, so the relationship will continue even after Brooklyn goes home this summer.

According to Powell, some people accuse the prolife community of only caring about babies until they are born. The Powell family emphasizes respecting the worth of each person throughout his life, including the Biblical command to take care of the orphan.

Kristi said, “I don’t want to get to heaven and have God ask, ‘Why didn’t you do what I told you to do? I gave you the resources.’”

The Texas Catholic Conference of Bishops has launched St. Joseph Ministry, a foster care initiative to help parishes support foster parents, those with children in the custody of Child Protective Services, and foster children who have aged out of the system. About 30,000 children are in foster care in Texas.

In their parish resource guide, the Texas bishops explain that those who are not called to be foster parents can support the frontlines by providing meals, tutoring, babysitting, and furnishing material items.

The Powells agree, having enjoyed an occasional movie with their older kids while someone watches the babies.

Despite the sacrifices, the Powells will open their hearts as long as they are able. Powell said, “I just love them. They are so fun when you see their little faces light up. My kids absolutely love doing it. There are times when we think about taking a break and my kids say ‘no, we need to do this.’”