Seminarians hit the books, in Spanish 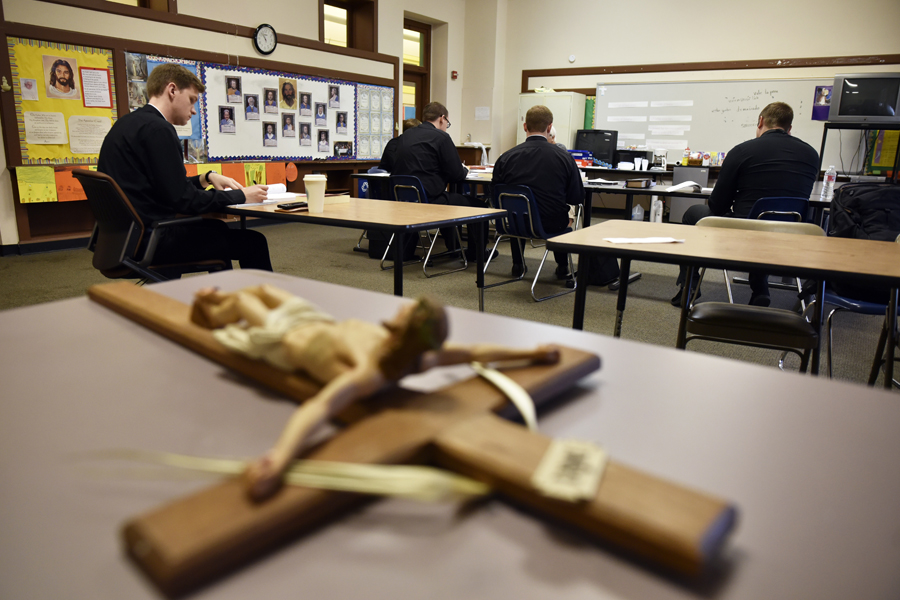 A small group of seminarians learn how to speak Spanish with teacher Terry Hostler at St. Mary of the Assumption Parish in Fort Worth on June 28, 2018. (NTC photo/Ben Torres)

FORT WORTH — Five seminarians from the Diocese of Fort Worth have spent the summer learning Spanish in an intensive language program that will enable them to better serve Spanish-speaking parishioners.

The program at St. Mary of the Assumption Parish in Fort Worth is being led by Terry Hostler, director of religious formation at St. Mary. Seminarians David La Pointe, Collin Becker, and Austin Hoodenpyle, all of the Theological College at Catholic University of America in Washington, D.C.; Brandon LeClair, of Assumption Seminary in San Antonio, and Thomas Jones, who just finished his pastoral year at St. Philip the Apostle Parish in Lewisville, have immersed themselves in the six-week Spanish program.

“It is a course to strengthen the basic Spanish skills of seminarians for the Diocese of Fort Worth, in order to prepare them for ministry to the Spanish-speaking community,” said Hostler, who has a bachelor’s degree in Spanish and has taught for 22 years in the Fort Worth Independent School District — 19 years in elementary bilingual education and the past three teaching high school Spanish.

The class is four days a week, three hours a day.

Nearly half of the 90 parishes in the Fort Worth Diocese offer Mass in Spanish, so having bilingual priests to serve those parishes is an important tool in pastoral work, said Marlon De La Torre, director of evangelization and catechesis for the diocese. 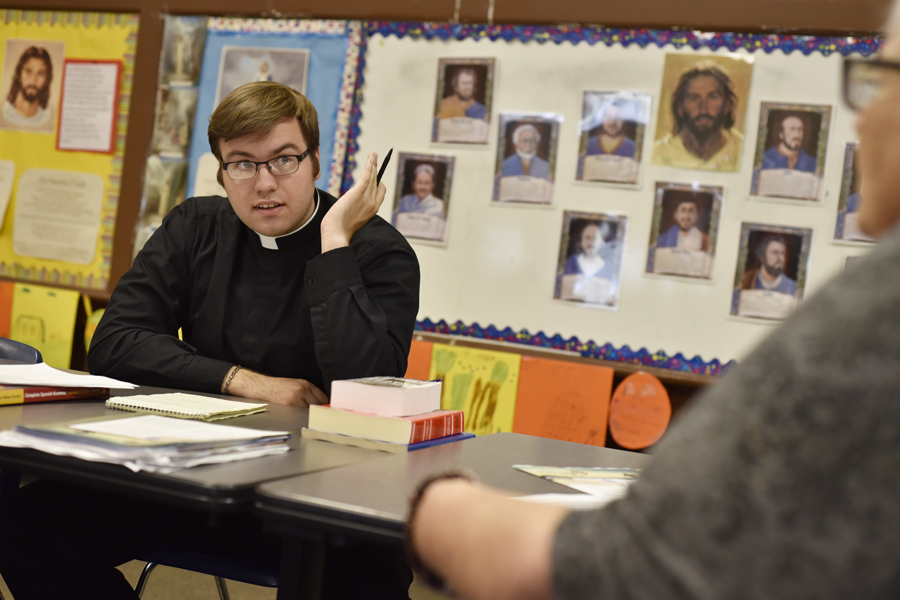 Seminarian Collin Becker practices his Spanish with teacher Terry Hostler at St. Mary of the Assumption Parish in Fort Worth, on June 28, 2018. (NTC photo/Ben Torres)

“There is a need for Spanish-speaking priests because the Catholic population is now over 50 percent Hispanic,” De La Torre said.

Hostler said the curriculum has three major points of emphasis — “Praying an office from the Liturgy of the Hours or readings of the day for pronunciation/intonation; grammar study focusing on verb tenses and application scenarios or reflections on the Sunday readings; and, use of RCIA material in Spanish to help build vocabulary that they will use often.”

She said the seminarians are learning a form of Spanish that will be functional in their work.

“Since they have some basic Spanish, we are concentrating on Spanish that they will use working in a parish which serves Spanish-speaking parishioners,” Hostler said. “We also are learning about attitudes and customs of this community as well.”

La Pointe said the class is helping the seminarians get introduced to “Catholic Spanish.”

Hoodenpyle said that Hostler gives the class scenarios each day that help them learn conversational Spanish.

The changing demographic face of the diocese bolsters the seminarians’ commitment to learn another language. In fact, the entire class is conducted in Spanish.

“It’s a chance to have everyday practice in Spanish,” Becker said. “It’s important because of the demographic shift.”

According to the Texas Tribune, Hispanics will become the largest ethnic group in Texas by 2022. The Hispanic population in Texas increased from 9.7 million in 2010 to 11.1 million in 2017, the publication said.

LeClair, who said his knowledge of Spanish was limited, hopes the class will improve his ability to use Spanish in his duties as a priest.

“I hope to gain some more vocabulary that pertains to the Church,” LeClair said. He said a knowledge of Spanish will be a tool “for future use” when the seminarians find themselves in situations that require speaking Spanish to parishioners.