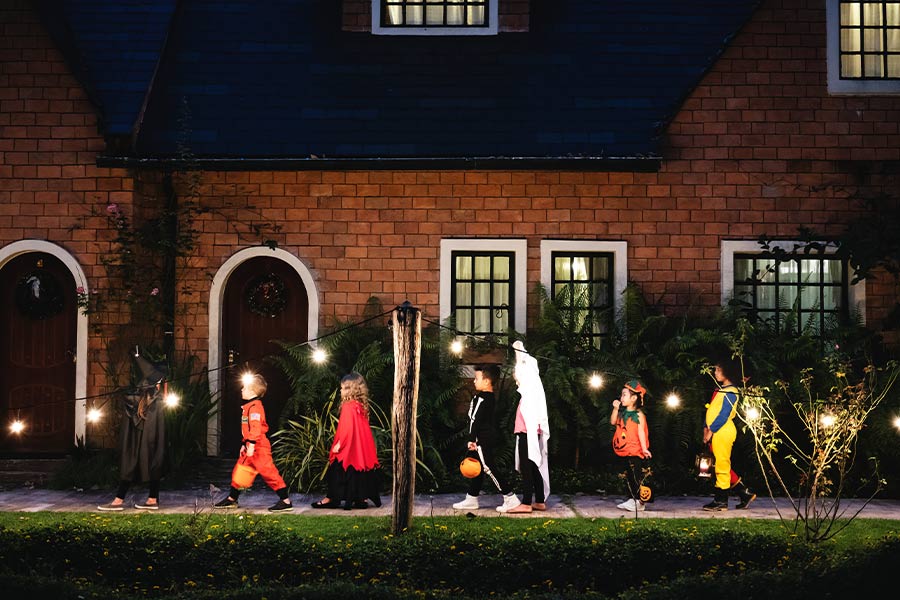 The true reason for wearing scary costumes during Halloween was to mock "death, hell, and sin" columnist Sean Wright says.

Any good thing to make us all merry:

One for Peter; two for Paul;

Three for Him who made us all.

Devotees of the gentle folksingers Peter, Paul and Mary will recall these lyrics but may not be aware of the story behind the song, a tale extending far into those medieval centuries which used to be called the Age of Faith because Catholic teaching so permeated daily life.

Among many distortions about the Middle Ages taught nowadays is that everyone in Europe was miserable. Rapacious bishops and greedy priests terrified illiterate nobles and overworked peasants with a wrathful, capricious God who, unless placated by mechanically recited prayers and forced alms, would cast believers into eternal damnation. This sordid medievalism is also seen in films and television series.

People living during the Age of Faith usually led happy and productive lives. Granted, craftsmen, peasants, and serfs worked from morning to sunset and, what was mostly rural living was difficult. Yet it wasn’t all hard work and drudgery.

Within the liturgical year, all 52 Sundays and 30-33 holy days of obligation, were days of complete rest from work. There were also some 70 saints’ days such as Michaelmas (September 29) and Martinmas (November 11). Special festival days of merriment occurred during Christmastide, including Epiphany; Paschaltide, the 50 days celebrating Easter; and Whitsuntide, the octave of Pentecost. Passiontide, the final two weeks of Lent, was more somberly commemorated.

In all, nearly three months of each year were given over to breaking up daily routine while providing rest from manual labor. During these festivals the Church encouraged games, recreation, arts and crafts, theatricals, games, music, and song.

Within this tradition, Hallowtide, as it was known, was and remains part of the liturgical year. It begins the evening of October 31st, includes November 1st, and concludes on November 2. On these days, all Saints in Heaven — known and unknown — are venerated, their intercession begged, and relief is offered the Holy Souls in Purgatory through indulgenced prayers and special Masses. Which brings us back to the soul cakes.

During the even (evening) of the vigil of the feast of All Saints — All Hallows in Olde English — children in cities, towns, villages, and hamlets would go “souling”— strolling door-to-door, calling on their extended families, friends, and neighbors, singing ancient souling hymns about the need to pray for those in Purgatory. Grateful housewives presented singers with small, round loaves of sweet quickbreads, small cakes looking like muffins, or thick cookies, each marked with a cross of raisins or currants. The singers ate them still warm, while saying prayers for the souls of that family’s faithful departed in Purgatory.

This is the origin of the Hallowe’en (“All Hallows Even”) tradition of “Trick or Treat”. The trickery wasn’t part of the original tradition.

When life was much harder, families sought an afterlife of heavenly repose in the glory of God. There was a much more vibrant belief in the communion of saints: that those living on earth are intimately connected to the faithful departed, united in Christ by baptism and prayer.

When’s the last time you heard that Hallowe’en is a time for laughing at Satan?

Never? Well, I’m not surprised. Our sophisticated age has cast off many a fine, old Catholic tradition. It’s unfortunate. Children crave traditions. When God is divorced from family life, children’s faith is the poorer for the loss.

Catholic children used to be taught that Satan, immersed as he is in spiteful arrogance and narcissistic conceit, absolutely hates being laughed at. All narcissists fear laughter. Satan loathes being reminded that he has forever lost the divine joy of the Beatific Vision.

Regrettably, mistaken Fundamentalist attitudes have come to fore. Hallowe’en is regarded as a night to be feared and shunned; a night given over to evil; a night belonging to Satan and his demons. For precisely that reason, Satanists have readily taken to that night for vile, disgustingly deviant purposes.

Catholic tradition has a much healthier spirituality. We yield nothing to evil; surrender nothing created by God to Satan since God pronounced all He made to be good. Catholics used to sing hymns extolling Christ’s victory over “death, hell and sin / which Adam’s transgression had wrap’t us in.” We were then advised in song to “Rejoice and be merry, set sorrow aside!” because, on Calvary, death fell victim to life.

The true reason for wearing costumes betokening scary ghosts, red-suited devils, and evil witches is to ridicule, respectively, “death, hell, and sin.” Soul cakes, always marked by a cross, were, therefore, the family’s humble sacramental reminder of the Most Blessed Sacrament and of the joy to be had when one is bidden to join the wondrous, heavenly Supper of the Lamb.

Sean M. Wright, MA, an Emmy-nominated television writer, is a Master Catechist for the Archdiocese of Los Angeles. He is a member of his parish’s RCIA team.