FORT WORTH — Whether it was a third grader struggling with math homework or a prison inmate with a troubled past, Sister Frances Joan Vuillemin, SSMN, offered encouraging words and guidance.

“She was always concerned about making things better for somebody else,” observed Bill Otto, a longtime friend of the Sisters of St. Mary of Namur. “Even in her advanced age, Sr. Frances continued working for the interests of the underprivileged.”

The longtime educator, who became involved in prison ministry in her mid 70s, died suddenly November 13 at the age of 98. A private wake and funeral service is planned for November 19 at Our Lady of Victory Center followed by a Mass of Christian Burial on Friday, November 20 at 10 a.m. The liturgy will be livestreamed by Sister Clara at her address: facebook.clara.vo. For viewing later, log onto the Facebook page of the Sisters of St. Mary, Western Province.

Born in Waco to Cora and August Vuillemin, Sr. Frances and her seven brothers and sisters were educated by the Sisters of St. Mary of Namur. Her father, a prolific church contractor, built St. Francis on the Brazos in Waco.

Thoughts of a vocation to religious life began when she was 12. Sitting in a church waiting for a funeral Mass to start, the elementary school student suddenly felt touched by the hand of God.

“In a flash, I knew of His love for me in a way I had not known before,” she wrote describing the experience. “In the next moment I understood the wealth of good choices He made for me: hard-working conscientious parents, seven challenging brothers and sisters, good neighbors and godparents, helpful teachers, and being brought up in the Catholic faith.”

Grateful, the young girl decided to offer God her life as a Sister of St. Mary of Namur in return. Following in the footsteps of the women she admired, “I could pray, teach little children about God, help needy people, scrub floors, or whatever God wanted me to do.”

For the next 80 years, Sr. Frances spent her days serving others. A skilled artist, she taught in many of the schools staffed by the Sisters of St. Mary in the Dallas-Fort Worth area as well as Hollister, California where she studied with noted artist Corita Kent. After retiring, she continued to volunteer at both Our Mother of Mercy and St. Andrew Catholic School as an art teacher.

“She made learning fun,” recalled Lucy Garcia who drove her brother to the OLV convent for weekly tutoring sessions with Sr. Frances.

After sitting in a classroom most of the day, the youngster sometimes protested the extra study sessions.

“But once he got there, he was a different person and wanted to stay longer,” she added. “They would play reading games and he was so happy to win.”

The tutoring improved her brother’s math and reading skills.

“Sr. Frances was so proud of him and he loved her a lot,” Garcia continued. “Her willingness to help kids made a difference.“

In 1995, Sr. Frances joined the late Sister St. John Begnaud and the late Sister Cecil Faget in a mission trip to war-torn Rwanda.  Hoping to rebuild the schools and missions destroyed during the genocide, they worked in an orphanage and helped ferry provisions and people between the village of Kiruhura and the capital city. Sr. Frances spent most of her time caring for the town’s youngest children aged three to six.

For their courage in traveling to a foreign land and willingness to help survivors of war, the trio received the 1996 Dorothy Day Award from the Diocese of Fort Worth’s former Office of Peace and Justice Ministries. After returning to Texas, Sr. Frances continued to care for the needs of the Rwandan people by collecting usable clothing for them.

Always trying to help the disadvantaged, the tireless retiree began mentoring female inmates at the Women’s Federal Prison and the Tarrant County Jail — a ministry that continued for 23 years. In 2019, the Tarrant County Sheriff’s Office recognized the elderly sister’s dedication to meeting the spiritual needs of the incarcerated by presenting her with a plaque.

“She was an inspiration,” said Sylvia Barbolla, a fellow prison chaplain and friend. “Other chaplains would tell me they didn’t feel like coming to the jail some days but then they would remember the little bitty nun in her 90s who is always there.” 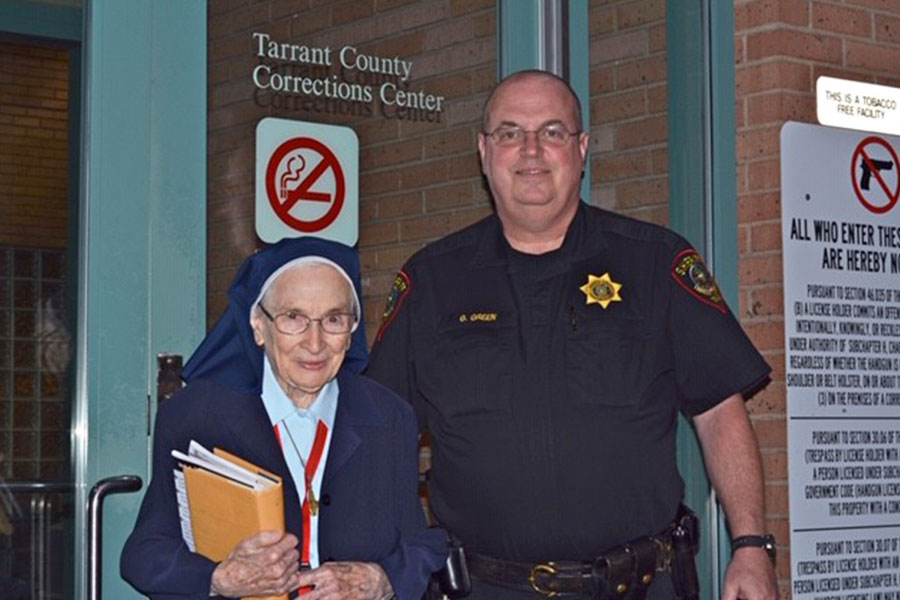 Sr. Frances was always doing little things for people, she added. Using small, perfect penmanship, the volunteer would write out prayers for inmates or minister to other visitors. When a fellow chaplain discovered her Bible was missing a section of Luke, Sr. Frances printed out the pages and gave them to her the next week.

“She was a joy to everyone around her and glowed with a really sweet presence,” explained Barbolla who served as the sister’s “taxi” to and from the jail.

At times, the diminutive nun would veer off the secured corridor and her friend would find her talking to a “big, scary-looking man” who happened to be passing through the jail.

“The Lord said, ‘Fear not’ and she really feared not,” Barbolla added. “She would go places others wouldn’t. She was 98 but had more zest for life and willingness to serve and teach than people half her age. I’m going to miss her.”

Sister Frances is survived by two brothers, a niece, and members of her religious community. In lieu of flowers, memorials may be sent to the Sisters of St. Mary, 909 W. Shaw St. Fort Worth, TX, 76110-4057.