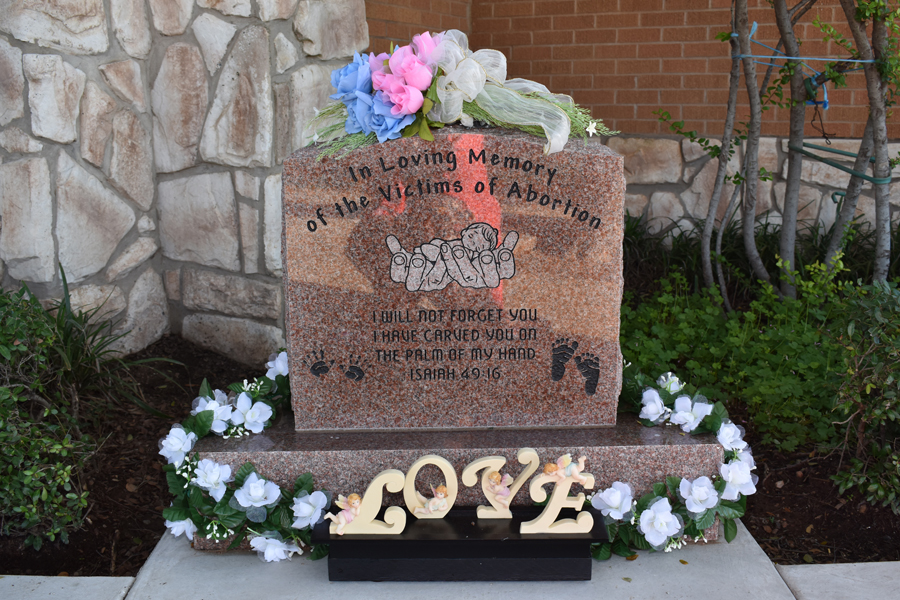 The memorial to victims of abortion is located just outside the front doors of St. Boniface Parish in Scotland, Texas. (NTC/Jenara Kocks Burgess)

SCOTLAND — Parishioners of St. Boniface in Scotland hope a memorial for the unborn in front of their parish will remind people to pray for the children who have lost their lives in abortions and their mothers.

“Since Jan. 22, 1973, when Roe v. Wade was passed, I’ve been praying. Millions have died. It just breaks my heart,” Rita Schreiber, a longtime parishioner of St. Boniface, said with sadness in her voice. “They’re all in heaven, and I think they’re watching over us and praying for us. It’s been my mission since the day I heard [the news] on the radio.”

On Oct. 21, as a part of Respect Life Month, St. Boniface parishioners gathered for a blessing of the memorial after Mass.

“I’m here to say ‘yes’ to Jesus and to say ‘yes’ to the good inspirations of the people of this parish,” said Father Michael Moloney, parochial administrator of St. Boniface and St. Mary Parish in Windthorst.

Fr. Moloney said it was his parishioners’ idea to fund and install the memorial at the church.

Helen Ann Hemmi, who has been a member of St. Boniface for 58 years, said she talked to Fr. Moloney, Schreiber, and other parishioners about having a memorial for the unborn at their parish after seeing similar memorials outside of other parishes. She felt like the flower beds they have next to St. Boniface was a good place for a similar memorial for the unborn.

“If you put it in the cemetery, it just gets lost and maybe you’ll just visit it once a year — or maybe more often for a few other people — but when you put it in the flower bed, every time you go to Mass, there are prayers for the mothers and the aborted babies. Generally, the majority thought it was a good idea. So we went ahead with it,” Hemmi said.

Schreiber has been involved in the respect life movement since the late 1970s, even leading local pro-life efforts for 10 years.

Schreiber and others have continued their pro-life efforts by volunteering at The Center in Wichita Falls, a nonprofit that provides compassion and free medical services and pregnancy testing to women in crisis pregnancies.

Schreiber said she and others volunteer at The Center on Thursdays.

“It’s my favorite day of the week. And it is my passion, and I hope, before I pass, [Roe v. Wade] will be overturned,” she said, teary eyed. “Until then, I’ll keep working and praying.”