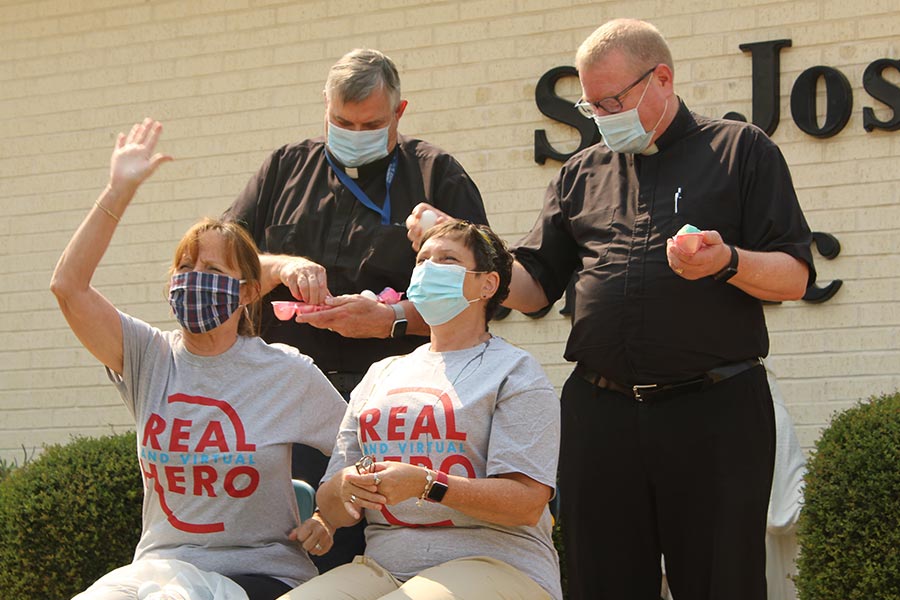 When the school reached its initial fundraising goal of $8,000 early in its first week of fundraising, students were rewarded with a unique incentive known as an “egg smash.” Principal Diane Price and Assistant Principal Melissa Gallagher, along with parish priests Fr. Daniel Kelley and Fr. Tom Kennedy, participated in a live egg smash event which was streamed to the school community. Fr. Kelley and Fr. Kennedy smashed both raw and boiled eggs over the two administrators’ heads.

Students earned another incentive known as a “slime-a-thon” as the fundraising continued to soar past the original $8,000 goal during the second week. Five faculty and staff members had slime simultaneously poured over their heads during the live slime-a-thon event which was also streamed to the school community. Distance learners were able to tune in live from home while on-campus learners viewed the events on smart boards in their classrooms.  Faculty and staff who participated included Xavier Rodriguez, Kelly Soto, Debbie Heid, Elisa Aguirre, and Laurie Grove.

“Knights On The Run” fundraiser is a two-week-long campaign culminating with a glow run for elementary students in grades Pre-K to 5 and a color run in grades 6 to 8.  The event ended with surprising success raising over $15,000. This was double what the school had expected to raise in the midst of a global pandemic.

Brittany Doering, St. Joseph development director said, “Our Home and School Association relies upon the funds raised from this annual event to support their efforts throughout the year. We are blessed to have a group of faculty and staff members who aren’t afraid to get a little messy for the kids!”