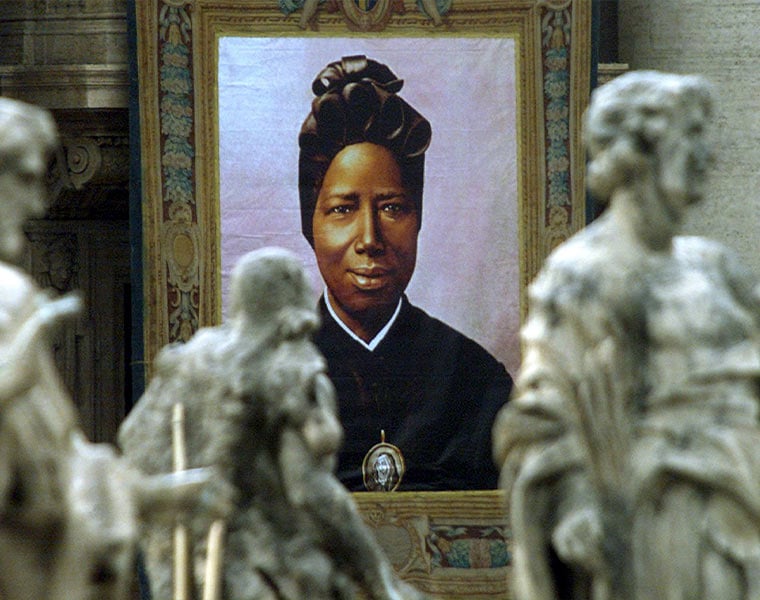 An image of Josephine Bakhita, a former Sudanese slave who became a nun, hangs from the facade of St. Peter's Basilica Oct. 1. She was canonized by Pope John Paul II along with 120 Chinese martyrs and U.S.-born Mother Katharine Drexel. (CNS photo from Reuters) (Oct. 2, 2000) See BIO-BAKHITA Sept. 28, 2000.

Each year on Feb. 8, the Church marks the feast day of St. Josephine Bakhita. Patroness of Sudan and victims of human trafficking, this saintly woman lived the meaning of the Gospel with extraordinary strength and grace.

Her remarkable story is living witness that the word of God radiates in the life and witness of saintly men and women who show, beyond a doubt, how a life of Christian virtue is possible with God’s grace.

Born in Sudan, a country in the northeast of Africa, in 1869, St. Bakhita was kidnapped and sold into slavery as a young girl. Her kidnappers named her "Bakhita," which means "fortunate" in Arabic. She was sold several times to cruel masters whose harsh mistreatment included severe beatings and unspeakable tortures.

Eventually she was sold to the Italian consul in Khartoum, Sudan, who presented her to a friend, the Italian businessman Augusto Michieli. Her new master brought her to Italy to serve as a nanny to his daughter. 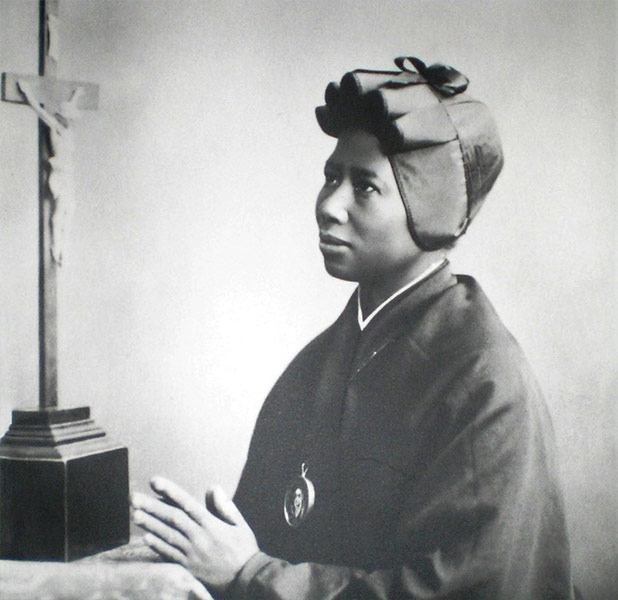 While accompanying the young girl to a Catholic school run by the Canossian Sisters in Venice, St. Bakhita encountered the Catholic faith for the first time. She was given a silver crucifix and the image of the suffering Christ made a profound impact on her. At her Baptism in 1890, she took the name Josephine.

St. Bakhita refused to return to her home country when her master was recalled to Africa. With the support of the Canossian Sisters and the cardinal patriarch of Venice, St. Bakhita was freed from slavery. Soon after, she joined the Canossian Daughters of Charity in 1893, professing vows a few years later. She served her religious community with joyful humility for the next five decades, often standing at the door of the community to welcome children and say a prayer over them.

In 1910, at the request of her religious community, St. Bakhita agreed to share the story of journey from slavery to freedom as a witness to her interior strength, the resilience of her spirit and her perseverance under extreme stress. She died in 1947 and was canonized by St. John Paul II on Oct. 1, 2000.

A young student once asked Josephine Bakhita what she would do if she were to meet her former slave masters. Without a moment’s hesitation, St. Bakhita responded that if she happened to meet those who kidnapped, enslaved and even tortured her, she would kneel and kiss their hands! As she said, "If these things had not happened, I would not have become a Christian and a religious today."

Jem Sullivan is a writer for the Catholic News Service