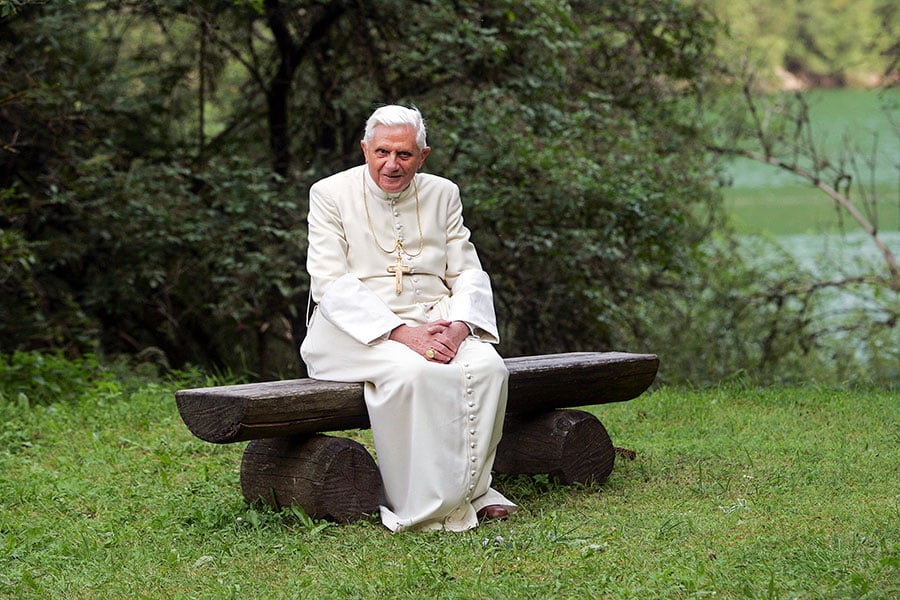 Pope Benedict XVI poses for pictures outside the Madonna della Salute Chapel in Lorenzago di Cadore while on vacation in northern Italy July 23, 2007. Pope Benedict died Dec. 31, 2022, at the age of 95 in his residence at the Vatican. (OSV News photo/Alessia Giuliani, Catholic Press Photo)

As 2022 came to an end, so too the earthly life of Pope Benedict XVI drew to its close. “Eternal rest grant unto him, O Lord, and let perpetual light shine upon him.”

In the days and weeks to come, much will be said about his legacy as pope and his impact as a leading theologian of his era. I will be reflecting on that myself. As a lawyer and not a theologian, I have studied Pope Benedict’s writings on the social issues of our time to see what they may mean for pressing questions of law and public policy. I have found in them — particularly in his trio of encyclicals — a deep well from which many will continue to draw deep insights on the moral roots of modern maladies.

Personally, however, Pope Benedict’s passing has given me insights on something else — a complement to lessons learned from his predecessor almost eighteen years ago. Both Saint John Paul II and Pope Benedict XVI taught me, and the world, something profound about how to face the end of life.

Saint John Paul II is the first pope I truly remember. A relatively young man when he became pope, he captivated the world with his strength, energy, peripatetic journeys to the ends of the earth, and his role on the world stage through some of the most pivotal events of the late twentieth century.

The early images of Sant John Paul II showed a vigorous man on ski slopes, alighting airplanes, and, with agility, kissing the ground as he entered new countries for the first time.

Yet, as he grew older, Saint John Paul II showed us all, in a very public way, what it is like to suffer through illness. So often, those who are ill, frail, and approaching death are hidden away. They can too often be separated from friends and family who no longer visit because it is difficult to see loved ones change. Many want to remember those in declining health “as they really were” — without realizing that when we are weak and suffering we are still, truly, who we “really” are.

I remember the very last images released of Pope Saint John Paul II. They showed a man weakened by illness and bereft of the robust energy that had marked the earlier years of his papacy. Yet, in that he showed the world the great dignity of those who suffer on the way to eternal life. It is unlikely most of us will ever approach death in such a public way. However, suffering and infirmity is part of our common humanity.

From Saint John Paul II, I learned a great deal about the acceptance of suffering, the importance of keeping those who suffer at the center of our lives and not at the margin, and the dignity of those who are facing their final illnesses and the physical deprivations that accompany that journey.

From Pope Benedict XVI, I learned another lesson — the importance of prayer as preparation for passage from this life. When he shocked the world with his resignation nearly a decade ago, Pope Benedict XVI turned from a very public life of action to a secluded life of prayer and contemplation.  His prayer was a way to serve the Church through a very powerful way vastly different from the way he had served the Church through so many decades of his life.

More recently, however, public statements and reports to the press have made it clear that Pope Benedict XVI was also deep in prayer in preparation for the end of his own life when he — like all of us — would meet his God.

In that, I learned a second valuable lesson. When I look ahead, I make plans for how I will live if I am blessed with the gift of years. I think about my physical health, financial security, and what my last wishes might be for myself and my family. These things still do not cross my mind very often, but I understand the practical wisdom in attending to them with care. From Pope Benedict, I have learned that it is not merely the practical and physical planning that need attention. Rather, time spent in prayer is the often neglected and best preparation for a happy death.

It is unlikely that most of us — unless called to a contemplative vocation — will willingly make such a dramatic surrender of the active life to devote the final decade of our earthly life to prayer. Yet, if it is in prayer that we better come to know and love God, then there can be no better preparation for eternity than growing to know and love the One with whom we hope to spend that eternity. From Pope Benedict XVI I saw that lesson lived.

These two Popes — collaborators in life and in prayer — will be remembered for what they did, wrote, said, and decided during their lives.  But for their fellow pilgrims, the very different lessons they taught about life’s end were their final gifts and blessings.

Thank you both for the ways you surrendered your ordinary times.

Lucia A. Silecchia is a Professor of Law and Associate Dean for Faculty Research at the Catholic University of America’s Columbus School of Law. “On Ordinary Times” is a biweekly column reflecting on the ways to find the sacred in the simple.