Take 5 with Father: start with prayer 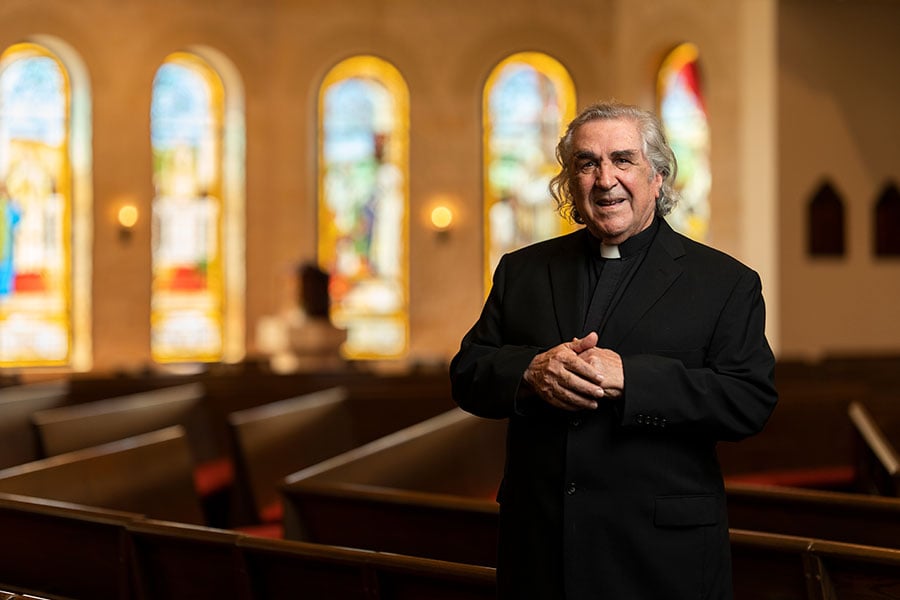 HE IS: Msgr. Publius Xuereb, pastor of Holy Redeemer Parish in Aledo, and he has served at 10 other parishes and under all four bishops in his 53 years in the Diocese of Fort Worth.

TREASURED ISLAND: After the family’s home on Malta was destroyed during World War II, his parents raised 11 children on the rural island of Gozo.

WELCOME TO TEXAS: While visiting his brother in Dallas in 1969, he had a chance encounter with Fort Worth Bishop John Cassata, who invited him to transfer to Fort Worth. Fr. Xuereb was one of 11 priests at his parish in Malta, and he recognized the newly created diocese had a great need for priests.

He feels indebted to the people of Wichita Falls, his first assignment, who were patient with him while he learned English.

TRAVELING MAN: Anointing a dying man decades ago has led to a 40-year friendship with the Travelers, who seek Msgr. Publius for Mass and sacraments. “They are my extended family, and they have adopted me into theirs.”

FAMILY TIES: Msgr. Publius recommends composing or selecting a prayer together to pray at home as a family and after Communion. “The prayer will keep them united. Family prayer will last.”

LISTEN UP: Parishioners must pay particular attention to three prayers during Mass, he said. First, the prayer of offering at Mass. “When the priest is offering, he is offering your needs, your pain, your petitions, your thanksgiving, your everything.”

The third prayer is silent meditation after Communion. “It’s important. Open up your need, your thanksgiving.”

HEALING TOUCH: Msgr. Xuereb restores broken statues of saints, praying with each saint as he reattaches an arm or reconstructs a nose.

An especially meaningful restoration was a six-inch statue of Jesus given by a grandmother to her grandson as he was drafted to fight in Vietnam. Msgr. Publius fashioned a new arm, but he didn’t restore it completely to remind the veteran of the horrors of war.

CHRIST’S HEALING TOUCH: On the first Sunday of each month, Msgr. Xuereb offers a Mass of healing with Adoration, Benediction, and Anointing of the Sick. Prayer is dedicated for the unity of the family, those with special needs, those who are ill and their caregivers, and vocations.

BLESS THESE DOORS: When he unlocks the church doors for Confession and Mass, he prays, “Lord Jesus, hundreds of people will pass through these doors. Some come happy, with praise and thanksgiving; others with a heavy heart full of fear, pain, or sickness seeking earnestly the acceptance of a loving Redeemer. I will do the consecration; you do the healing.”

CREATOR OF BEAUTY: Even if you don’t read or understand the language, “Art makes you come close to Jesus, to the Bible.” Msgr. Xuereb fashioned the stained-glass windows at Holy Redeemer, featuring the sacraments and accented with native plants.

He  designed statues of Mary and Joseph, each with a young Jesus, which were carved in Italy. Churches in Italy, Australia, and Canada have ordered duplicates of the statues. “Let them make as many as possible; it’s for the Church,” said the artist.

WHY RETIRE? “I don’t work. I love this place.” The 80-year-old priest arrives at the church at 7 a.m. for 90 minutes of peaceful prayer and thanksgiving in front of the Blessed Sacrament each day. “Why do you want to retire? This is better than medicine.”

FIRST FRUITS: Msgr. Xuereb inherited a green thumb from his mother, and he keeps her habit of presenting the first bloom of each plant to a statue of Mary or Jesus.

SPECIAL SAINT: In his youth, Msgr. Publius heard the preaching of Father George Preca, who spread the Gospel among children and laborers on the waterfronts of Malta. This “second apostle of Malta” — St. Paul was the first — was canonized in 2007, and St. George Preca is the patron of the Knights of Columbus Council at Holy Redeemer.