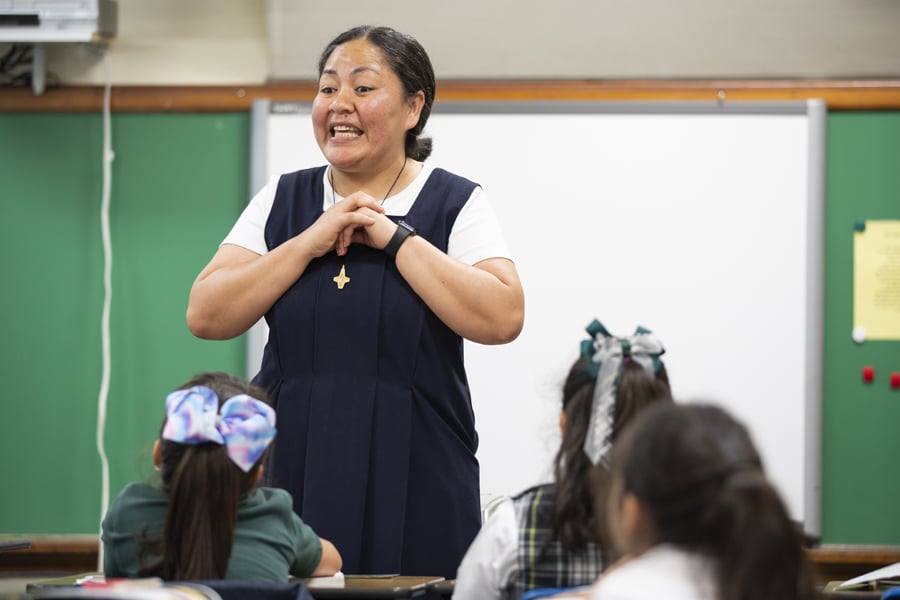 The Sisters of St. Mary of Namur trekked from Europe to New York to Texas hoping, in the words of Mother Emilie Kemen, to do a little good. In the 202 years since, the sisters have accomplished that and much more by spreading the faith, among other ways, by opening Catholic schools in New York, Texas, and other locales including Our Lady of Victory Catholic School in Fort Worth.

The sisters persevered against unfavorable odds. Father Nicholas-Joseph Minsart founded his parish and an association of religious women, the Institute of the Sisters of St. Mary, in 1819, at a time when religious communities were forbidden in Belgium. The order flourished and the sisters later traveled to New York in 1863, during the height of the Civil War, to establish their first American school. Additional sisters traveled to Texas in 1873 during a time of widespread anti-Catholic animus but went on to found Sacred Heart Academy that same year in Waco.

“The sisters landed in Waco when it was still Waco Village,” Sister Louise Smith, SSMN, said. “There were no paved streets or sidewalks. It was a really rustic place and one of the stops on the Chisholm Trail. So it had cowboys and cattle going through constantly.”

Sr. Louise, who resides in the current convent on OLV’s grounds and serves as an archivist for the order, said the sisters almost abandoned Texas.

“If it hadn’t been for yellow fever, we probably wouldn’t be here today,” Sr. Louise said. “Mother Emilie and the sisters with her were rather discouraged at the beginning because so few students came to register for school.”

The sisters even considered returning to New York.

“But yellow and dengue fever quarantined Waco and they couldn’t leave,” Sr. Louise said. “Mother Emilie took that as a sign that they weren’t supposed to leave.”

The decision was providential and over a span of 40 years, the sisters established several other Texas schools, including St. Ignatius Academy in 1885 in downtown Fort Worth and OLV in 1910.

The all-girls school welcomed 31 boarders and 41 day students on Sept. 12, 1910, before construction of the building was complete. In addition to the sisters, the building originally included elementary through high school students and later added a junior college. Nolan Catholic High School and the University of Dallas subsequently canceled the need for the high school and college.

Construction of the current elementary and middle school, which included boy and girl students, began in 1953. The sisters sold the large original building in 1988 and moved into their current convent located behind it.

On Feb. 23, however, the Sisters of St. Mary announced their decision to close OLV at the end of the current school year. Sister Patricia Ridgley, regional superior for the SSMNs, cited rising costs, declining enrollment, and the COVID-19 pandemic as the reasons behind the decision.

“Those were a very painful series of meetings and prayers trying to discern what’s feasible with our limited resources and, of course, the great needs of education,” Sr. Patricia said. “When we finally did come to that painful decision, I think we have not second guessed ourselves. I think we’re following God’s path even with that decision.”

News of the closure stirred sadness, but also reflection and a sense of accomplishment.

“We say we are standing on the shoulders of those who went before us,” Sr. Louise said. “I think so often of those marvelous women who established that huge academy over there. To have the courage to put up a building like that. You wonder how they did it. And yet, that’s the kind of thing the SSMNs have done ever since we were established in Belgium.
“I think it’s amazing what they did and the number of students they have taught and given the faith to. I think it was [former Diocese of Dallas Bishop Edward Dunne] who said the sisters brought the faith to North Texas.”

“When I walk through [OLV’s] halls and see the different sisters who were principals there and think of the sisters who taught there, I think we put some of our very best educators in that school,” Sr. Patricia said. “Many, every summer, would hold their own specialized workshops or attend universities to learn the latest teaching methods. Some were quite innovative at the time. To me, that says real commitment to their vocation that those sisters put into their work.” 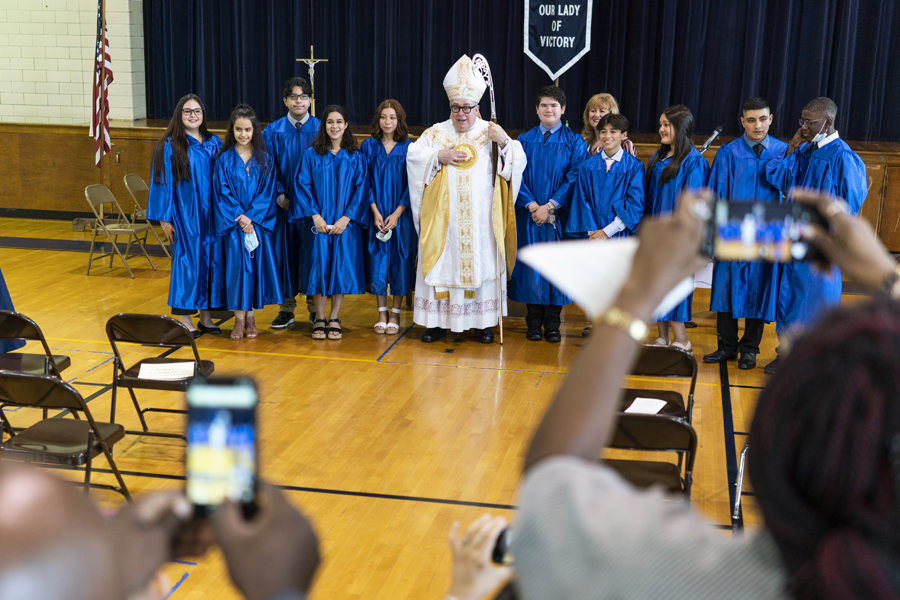 Proud parents take photos of the eighth grade graduating class with Bishop Michael Olson. Students, parents, faculty, and staff of Our Lady of Victory Catholic School joined together for a school Mass celebrated by Bishop Olson and the final graduation from the school on May 20, 2021. (NTC/Juan Guajardo).

Sr. Louise noted that the school sat near the end of Fort Worth’s trolley line when it opened. She added that several famous stars of the day including violinist Maud Powell, opera star Madame Tetrazzini and Shakespearean reader Charles E. Griffith performed in the building’s auditorium.

On a darker note, the Ku Klux Klan also burned a cross on school property in the 1920s.

That occurred, Sr. Louise said, after a young woman entered the order. Although her father was fine with her decision, several of his friends, members of the KKK, apparently were not.

“That’s when they burned a cross on the front lawn,” Sr. Louise said. “Of course, everyone in the convent was looking out the window wondering what’s going on, what are they doing out there?”

On a brighter note, OLV became, in the early 1950s, Fort Worth’s first fully integrated private or public school.
“It really caused a sensation when [Sister Teresa Webber, the Provincial] said it would be an integrated school for both boys and girls and white and Black,” Sr. Louise said.

Sr. Louise laughed when reminded that portions of the 1990 movie “Problem Child” were filmed at the former convent building.

“Oh, we were ashamed of that but had no control since we no longer owned that building,” Sr. Louise said. “It was a terrible movie.”

“It was 100 years old and within a week or so of being demolished,” Boothe said. “We secured the building and, by the time we were finished, it was given another 100 years of life hopefully.

“We found some interesting things during the renovation. One of the original builders apparently got paid and bought a new pair of boots because we found a pair of old boots inside the wall.”

“That was hard too, saying goodbye to the grand red lady as some of us call her,” Sr. Patricia said. “I hope it will continue to be used fruitfully.”

Fort Worth resident Doug Sutherland said his grandfather, William Shaw, operated a dairy in the area in 1909 and helped the sisters negotiate the purchase of the 26-acre city block OLV occupies.

“It’s a sad thing,” Sutherland said of the impending closure. “I’d like to see the school continue to be used for a positive educational purpose.” 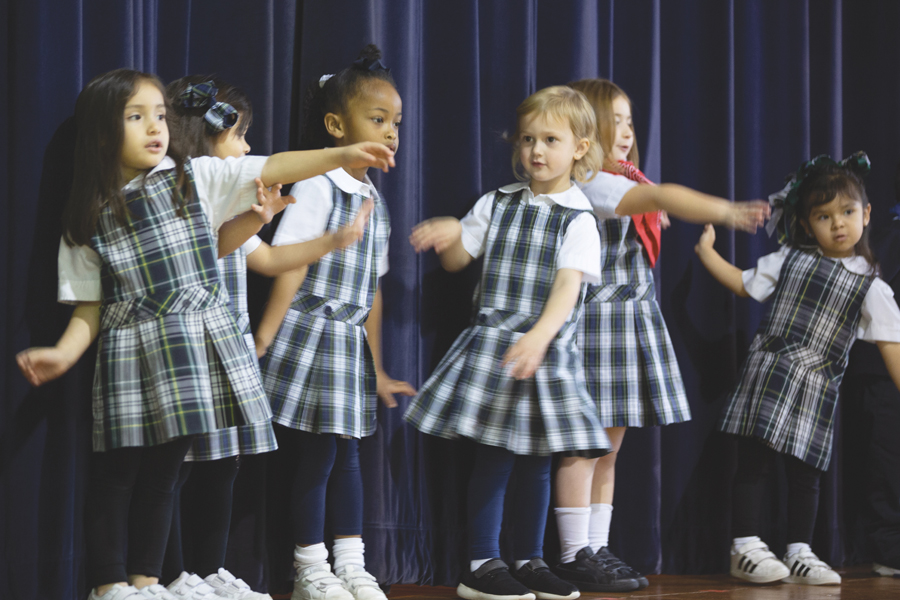 Education remains a vital component of the sisters’ mission, Sr. Patricia said, and a committee has been formed to determine the best future use for the school.

Principal Linda Kuntz, a former student, recalled great memories of playing on the sidewalk and attending Mass in the old convent’s chapel.

She and Sr. Patricia praised the Diocese of Fort Worth for helping students and educators find new Catholic schools.
“We’re passionate about helping them make an informed decision and keeping them within Catholic education,” Interim Superintendent of Catholic Schools Melissa Kasmeier said.

“Being a student here was awesome because everyone was so close,” Mills said. “That’s a rare thing and OLV always felt like home, honestly.

“Closing is sad, mainly for the kids,” he continued. “Some of the eighth graders have younger siblings and it’s sad that they won’t get to have the full OLV experience.”

Louisiana resident Marnie Woynowski attended OLV in the ‘60s, as did her sister and her mother before them.

“It’s sad because of the family connections and that OLV is such an institution with so much history. It was a great school. The sisters were ahead of their time in teaching girls to be strong. They stressed self-confidence and being yourself.”

Former student and current teacher Conor Gillen joked that he enrolled at OLV in the sixth grade and later began teaching English and history in the same room.

“I’ve definitely become a better Catholic in my time teaching here and I know moving forward that that will continue,” Gillen said. “The news of closing was sad but Principal Kuntz has been a cheerleader and a rock for all of us since day one.”

Although Sr. Patricia expressed sadness over OLV’s closing, she also cherished the decades-spanning legacy of educators, students. and parents.

“I think that’s just remarkable,” Sr. Patricia said. “I think that’s the value of having an institution a long time, the amazing stories we’ve heard, and that’s been really edifying.

“That helps us celebrate these 110 years and not just grieve, not just mourn it,” she continued. “Because of all the stories we’ve heard and our conviction, I think that, as a community, God is still leading us, if we have the eyes to see and ears to hear.” 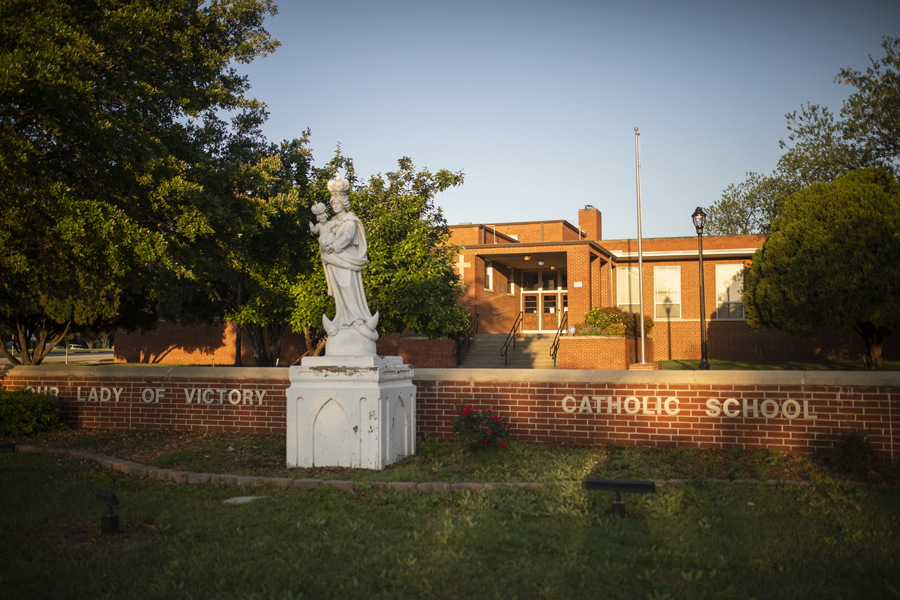 The statue of Our Lady of Victory stands in front of the elementary school. (NTC/Rodger Mallison) View all the photos from the