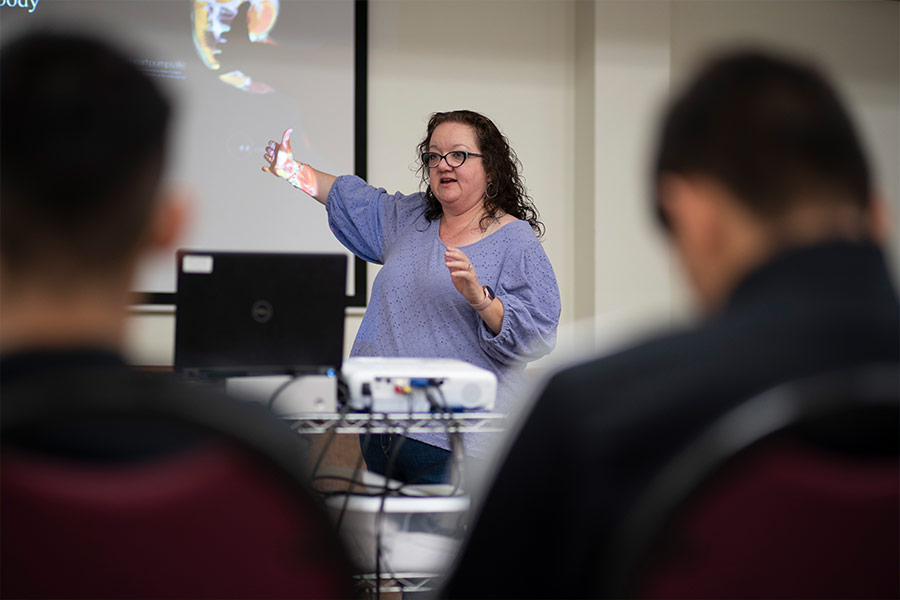 Angie Plumley gives a talk about fetal development at the annual Lock-in for Life at Most Blessed Sacrament Church on November 20, 2021. (NTC/Jayme Donahue)

ARLINGTON — When Terri Schauf was 14, she was surprised to hear that her sister’s best friend, Angie, was pregnant at the age of 16. But she was even more surprised to hear what her mother told Angie: “Congratulations.”

“God has given you a tremendous gift,” Schauf’s mother told Angie.

“The way that she responded is why I am the way I am, as far as my pro-life stance,” Schauf said.

On November 20, Schauf, now the Respect Life coordinator for the Diocese of Fort Worth, told this story to 80 teenagers at the annual Lock-In for Life in the fourth and final talk shared that night at Most Blessed Sacrament Parish in Arlington.

“When somebody shares something with you that she thinks is a crisis in her life, and it could be something outside of the scope of pregnancy, how do we respond? We are called to be joyful and to be servants of Christ and to show the response of the Church and how the Church is welcoming to all people,” Schauf said.

The teens also attended Eucharistic Adoration, then they had a night of movies, sports tournaments, games, and more, which ended at 7 a.m. with morning prayers and a donut breakfast.

Taveo Vizcaino, 14, a first-time attendee from St. Mary Church in Graham, had never thought much about these topics before. He attended with several of his friends who had been to the event in previous years, thinking more about the prospect of movies and activities than the content of the talks.

“It’s really hit. It really has,” he said. “I’m with pro-life that abortion needs to stop.”

The theme for the night was based on The Visitation — when Mary learned her cousin Elizabeth was pregnant, and she hastily went to be with her, to which Elizabeth and her unborn child met  Mary, carrying Jesus in her womb, with joy. Schauf said that the theme felt “inspired by the Holy Spirit.”

“Your response is supposed to be one of joy — not of fear, not of trepidation, not of worry — because life is a gift, and it’s not to be feared,” said Victoria Ramon, Director of Youth, Young Adult, and Campus Ministry. 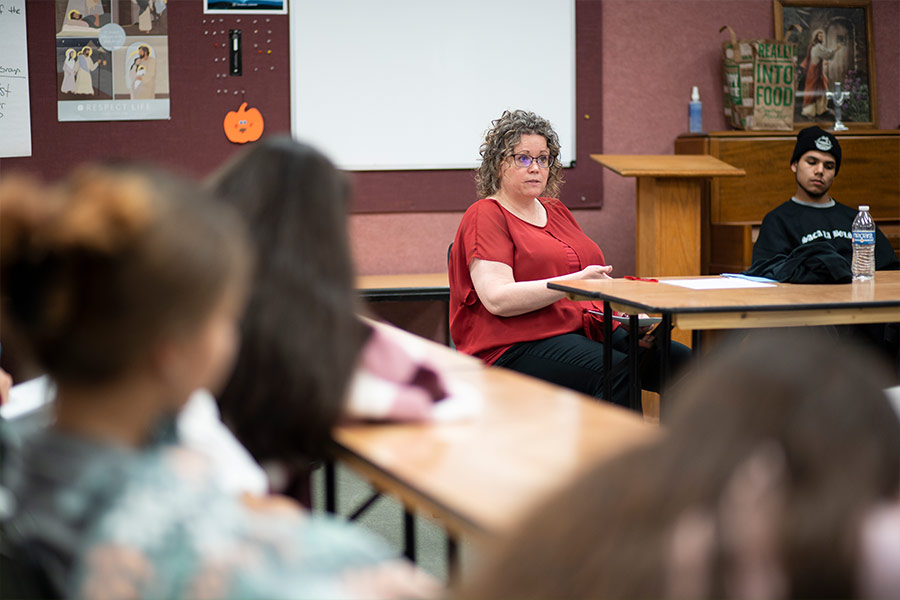 Terri Schauf gives a talk about abortion procedures during the annual Lock-in for Life on Nov. 20. More than 80 teens attended the event. (NTC/Jayme Donahue)

The idea came to co-organizers Ramon and Schauf because of the Walking with Moms in Need campaign from the USCCB, an initiative which seeks to educate Catholics and support pregnancy centers. Similarly, the staff wanted to ensure that the event educated teens on how to respond to women in crisis situations within their own communities.

“What I hope for them to leave with the most is the knowledge of what to do,” Schauf said. “If [they] ever meet someone in high school, or in college, or as an adult, [their] response to her will have an impact, and [they] could be giving a person’s baby a chance at life because [they] said ‘Congratulations’ instead of ‘You can’t do this.’”

The Lock-in for Life started at 5 p.m. with Mass at Most Blessed Sacrament, followed by icebreakers and four talks. In three breakout sessions, teens learned about abortion procedures, fetal development, and abortion legislation. Schauf gave a final talk on the importance of the joyful reception of women in crisis situations.

Her talk ended with the words: “Please be that person who goes in haste to help, and who receives in joy.”

“An unexpected pregnancy is not something to be feared, ever,” she added. “In many ways, when we respond with joy and we help the women who are afraid to get connected to pregnancy aid centers or other resources, there’s nothing to be afraid of because God will provide.”