The Domestic Church: Love and faith, tested and true 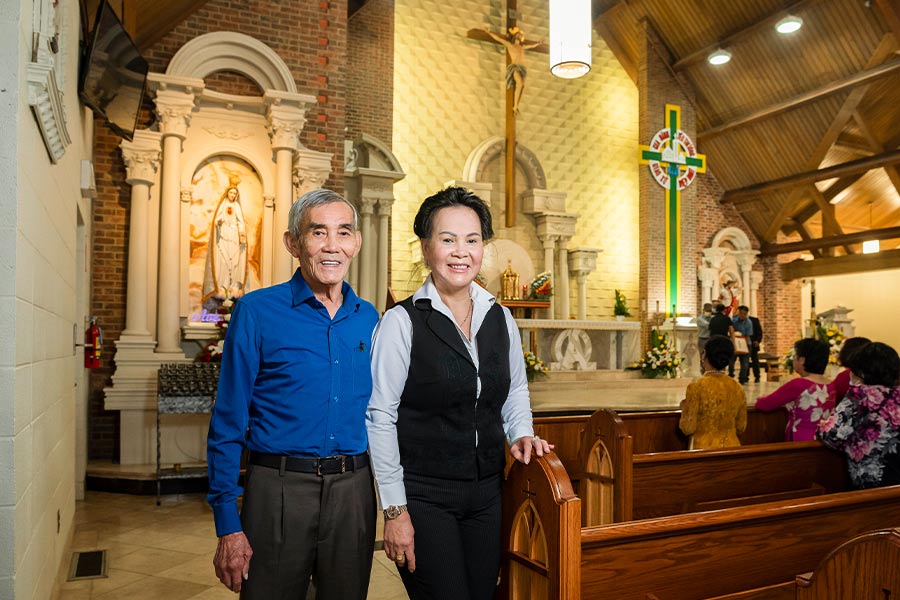 Joe and Mary Pham. Their devotion to the Blessed Mother inspired them to donate the Marian statue behind them to Christ the King Parish in Fort Worth. (NTC/Ben Torres)

Pope Francis released his apostolic exhortation Amoris Laetitia (The Joy of Love) five years ago. Based on the two synods on the family convoked by the pontiff in 2014 and 2015, it affirms the complexity and realities of family life and shares spiritual insights and practical wisdom.

As an example of the document’s tone and content, take paragraph 57, in which Pope Francis writes, “I thank God that many families, which are far from considering themselves perfect, live in love, fulfill their calling, and keep moving forward, even if they fall many times along the way. The Synod’s reflections show us that there is no stereotype of the ideal family, but rather a challenging mosaic made up of many different realities, with all their joys, hopes, and problems.”

In honor of the fifth anniversary of Amoris Laetitia, the NTC expands its regular feature The Domestic Church. Joe and Mary Pham, parishioners of Christ the King, discussed how faith has helped them overcome hardships as they fled their homeland in Vietnam and raised six children in Fort Worth.

THE RIGHT CHOICE — Joe and Mary grew up in Catholic families in Vietnam. Their fathers knew each other, and they planned for their children to marry. Although an arranged marriage is unconventional in our time and place, it was typical for their community. Mary explained that because of the trust and respect they gave their parents, “We believe that our parents made the right decision. We work at the marriage. We share equal responsibility to make the relationship work and raise a family.”

The couple will celebrate their 50th wedding anniversary on April 30, 2022.

GO WITH GOD — When the Vietnam War ended, economic hardships remained and political and religious repression intensified. In 1980, Joe and Mary had four children and another on the way, but they contemplated joining the estimated 800,000 Vietnamese who fled their homeland by boat.

It would be a dangerous and unpredictable journey, sailing in small, overcrowded fishing boats not designed for the open sea and at the mercy of weather and pirates. Leaving the country was illegal, and a fourth or more of the refugees died at sea. Should they attempt the journey?

For weeks, Mary asked the Blessed Mother for wisdom. “Mary should show me the way. Whatever the decision, guide us,” she remembered.

They would leave behind land and property, but Mary thought, “As long as I’m healthy and still have two hands, we can rebuild what we have lost.”

COMING TO AMERICA — Joe left first with their three older children, who were 8, 6, and 4 years old. He recalled, “The children were seasick. It was a challenge to get them to eat, to stay strong and hydrated.”

The boat’s engine died before they reached their destination of Malaysia, and Joe resorted to using a small amount of gold that Mary had sewn into her daughter’s waistband to pay a Chinese fishing boat to tow them.

After reaching Malaysia, Joe, who had served in the South Vietnamese Army, was able to request refugee resettlement in the U.S.

MEANWHILE — Mary “felt 100 percent sure” she would see her husband and older children again, because she trusted they were following God’s plan.

She made the voyage a year later, with a three-year-old and a six-month-old. Fellow refugees on the boat worried the baby’s cries would alert the authorities and all would be imprisoned. She muffled the baby, but seasickness and minimal nutrition proved to be a bigger problem. Mary lost her strength and was no longer able to hold, much less breastfeed, the infant. Passengers supported her with herbal remedies until she revived.

TOGETHER AGAIN — The couple reunited in Oklahoma, where Joe had found work as a bricklayer by day and a cook at night. Mary worked at a printing company in the morning and at restaurants in the afternoon and evening.

A sympathetic priest allowed them to enroll their children in Catholic school for a nominal fee.

Joe eventually went to trade school and became a repair technician. He found a job in Fort Worth, and the family, now with six children, followed him later.

The couple bought a convenience store, where Mary worked long days and the children helped clean and stock shelves after school. Joe took over in the evenings after finishing his day job. “Every day,” recalled Joe.

In Fort Worth, all six children attended Catholic school and graduated from Nolan Catholic High School. Their daughter Chi remembers staying after school to clean to offset some of the tuition. Catholic school was important to the family because the couple desired “strong academics and strong faith” for their children.

TODAY — Having sold the store and retired, Mary increased her service to Christ the King Parish, which she said was very welcoming when they moved to Fort Worth. Mary cooks for parish events, belongs to a prayer group, and brings the Eucharist to the homebound. Giving back to the parish is important to the couple, who has 10 grandchildren.

POWER OF PRAYER — Three of Mary’s relatives were martyred for their faith and are among the 117 Vietnamese Martyrs that were canonized in 1988. She believes their intercession has helped her family through difficult times.

Mary is also close to the Blessed Mother. “If you ask Mary to intercede for you, your prayer will be heard,” she said.

But, Mary advised, always pray that God’s will be done, because sometimes God has a better plan. God has blessed the family with more than she asked, “more than I ever thought in my imagination to be possible,” she said.

For example, Mary prayed that her children would go to college. The oldest graduated from college and is a computer programmer, and the five younger siblings are physicians. Despite their accomplishments, Mary wants her children to know, “At the base of it, it’s not through their work alone — it is God’s gift to us, and He’s still guiding us.”

LIFE LESSONS — Mary hopes that her children have learned that “No matter what the hardships are, God will provide.” And Joe, like the silent saint whose name he bears, summed up his example of faith in just one word: “Patience.”