The ear of the pope 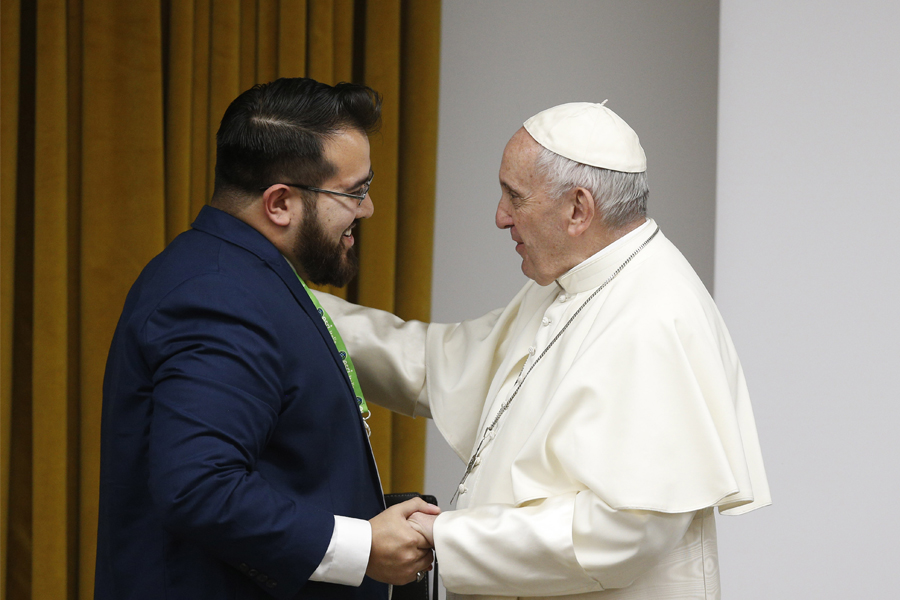 Pope Francis greets Nick Lopez, 27, director of campus ministry for the University of Dallas, during a pre-synod gathering of youth delegates at the Pontifical International Maria Mater Ecclesiae College in Rome March 19. The meeting was in preparation for the Synod of Bishops on young people, the faith and vocational discernment this October at the Vatican. (CNS photo/Paul Haring)

As the director of campus ministry at the University of Dallas, Nick Lopez talks with young people every day. Why was March 19 different? Along with 300 young adults from around the world, Pope Francis was listening.

The St. Michael in Bedford parishioner was one of three young adult Catholics chosen to represent the U.S. at a pre-synod gathering in Rome to share ideas about young people and their relationship to the Church. The pre-synod event, called by Pope Francis, is a forerunner to October’s Synod of Bishops where prelates will meet to discuss “Young People, Faith, and Vocational Discernment.”

One of five delegates asked to address the Holy Father directly, Lopez talked about the struggles and opportunities facing young people in the Americas during his 10-minute presentation. The campus minister told the pontiff a common thread runs through the life of every young person — constant transition.

“The life of the young person is riddled with potential changes and the mere existence of these changes is cause for great stress and anxiety,” he said to the Holy Father, adding later, “It appears the Church’s guidance of our youth and young adults is needed now more than ever.”

“It was wonderful to see the universal Church,” he continued. “When it comes to youth and young adults, there are a lot of commonalities but there are also differences depending what part of the world you come from. It was eye opening to see and hear those stories.”

The 28-year-old calls the ability of representatives from across the globe to create an effective document for bishops to use during their October synod “a remarkable feat.”

While the document is intended as a guide for the bishops and the pope, Lopez expects lay ministers to view it as a foundational work for their parish and young adult programs. The campus ministry director hopes to organize an open forum at the University of Dallas so students can voice their opinions about the document. He knows some of the content reflects their experiences.

“One of the things echoed in the document, that my students told me, is the need for accompaniment,” Lopez said. “When it comes to the Catholic Church and why young people leave, there’s a strong sense of the need for a personal relationship with members of the faith community.”

Young people want a mentor — a person who will journey with them — whether it’s a parent, aunt, uncle, or priest.
“They want someone who will walk with and set an example not just when it comes to Church teachings, but the lived experience,” he added.

Lopez, Katie Prejean-McGrady, a youth minister and popular speaker from the Diocese of Lake Charles, Louisiana, and LaSallian Christian Brother Javier Hansen, a religion teacher at Cathedral High School in El Paso, were the three young adult Catholics chosen to represent the U.S. in Rome. The trio joined a 300-member delegation that included Catholics, people of other faiths, agnostics, and lapsed Catholics from around the world.

Inviting both Christians and non-Christians to attend the pre-synod assembly, the Holy Father stated, “The Church wants to listen to the voices, the sensibilities, the faith, as well as the doubts and criticisms of young people. We must listen to young people.” 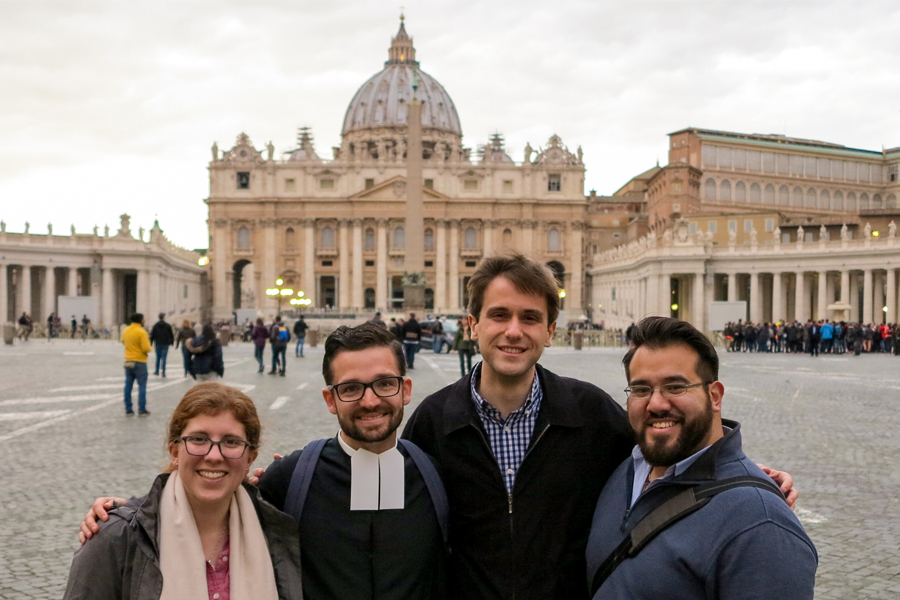 After attending the March 19-25 pre-synod event, Prejean-McGrady said one word continues to resonate with her — hope.
“I went in with the expectation of coming together with a lot of different people from different countries to ‘fix the problem,’” admitted the 28-year-old, a University of Dallas alumna.

But, instead of just mulling over dire statistics that show a growing number of 15- to 25-year-old Catholics leaving the faith, Prejean-McGrady said the small group conversations revealed an underlying confidence and joy in the Church.

“There are wonderful things happening globally that we need to articulate and be excited about,” she enthused. “It felt like a Catholic revival because we were willing to be present to one another and not be afraid to say what was on our minds and in our hearts.”

A lively dialogue focused on the challenges facing young people in different countries but, “there was no Church bashing,” Prejean-McGrady pointed out. Factors causing teens and young adults to walk away from regular Mass attendance were identified during small group conversations.

“Then we discussed what can bring them back. We were there to come up with solutions to problems and then articulate them in a way that gives the bishops a compass to show the direction young people are headed,” she added.

Delegates also spent a lot of time talking about the Mass and ways to make liturgy more meaningful, accessible, and inviting.

The pre-synod gathering proves the Church’s leadership values the ideas and contributions of the younger generation, according to Prejean-McGrady. Pope Francis spent four hours listening attentively to the questions and concerns posed by participants who ranged in age from 16 to 29.

“I think millennials — my generation — get a bad rap for being lazy, unaffected by what’s going on in the culture, and always having our heads stuck in phones and computers,” the wife and mother opined. “What I experienced this week about the millennial Church is one that is desperate to be involved, has ideas, and is unafraid to articulate those.”

She believes the document produced by pre-synod delegates is a worthy representation of the state of young people around the world.

“It’s not a theological treatise, an attempt to change Church doctrine, or a manifesto of demands,” Prejean-McGrady said adamantly. “It’s exactly what Pope Francis asked us to do. It captures what young people think globally so the Church knows how to address them, work with them, and preach the Gospel effectively.”