"The Immortals" demonstrates how heroism, sacrifice can unite us 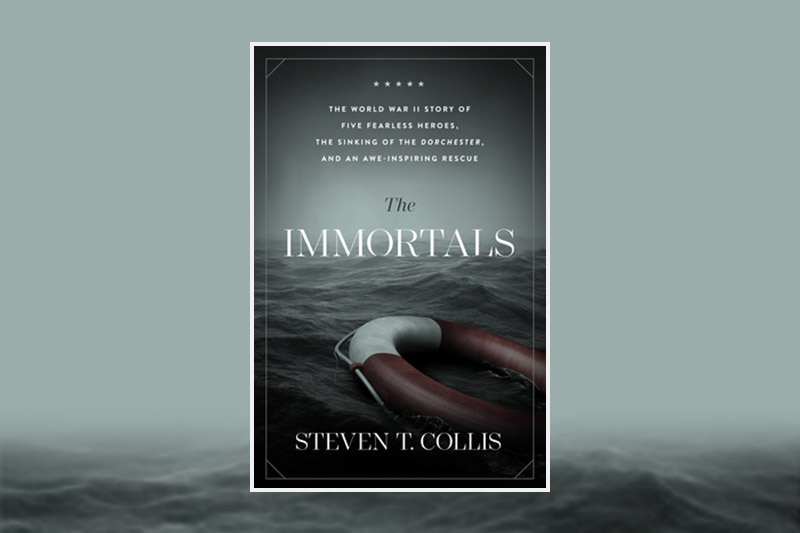 The Immortals: The World War II Story of Five Fearless Heroes, the Sinking of the Dorchester, and an Awe-inspiring Rescue” by Steven T. Collis. Shadow Mountain Publishing (Salt Lake City, Utah, May 11, 2021). 256 pp., $19.99.

As the old saying goes, there are two subjects that one should never bring up in polite conversation: politics and religion. Centuries of experience have repeatedly taught us that humans tend to be incapable of discussing either of these subjects without someone leaving the discussion bruised, whether that be metaphorically or literally. And this is perhaps understandable; figuring out how our governments should be run and matters of eternity are two of the most consequential topics on which people can debate: our welfare in this world and in the next. However, those same centuries of experience should also have taught us that, when circumstances force the differences we hold in politics and religion into the background, there is far more that unites us than divides us.

Steven T. Collis’ newest book, The Immortals, tells the harrowing story of one steward’s mate and four military chaplains (two Protestant ministers, one Catholic priest, and one Jewish rabbi), who were each instrumental in mitigating loss of life after the torpedoing of the U.S. transport ship the Dorchester during World War II by a Nazi U-boat. Collis makes sure to point out to his readers that this tragedy would go down in history as the heaviest loss suffered by any U.S. naval convoy throughout a war which was itself marked by its disregard for human life. The implications of this tale are profound enough that the further I read, I found myself thinking more and more, “Why haven’t I heard this story before?” I believe that many others who pick up this book will be brought to the same realization.

Collis, a law professor at the University of Texas and founding director of the school’s religious freedom clinic, chooses wisely in his recounting of the events by starting at the very beginning: the life stories of each of the five principal figures. This segment of the book is crucial. Not only does it introduce the reader to each of these incredible men, giving insight into their individual personalities and home lives, but it details each of their unique spiritual formations as well. This also gives the reader an opportunity to feel a sense of personal connection with them, which makes the climax of their story all the more heart-wrenching.

The style Collis employs throughout his book is decidedly narrative driven. Rather than simply laying bare the facts of the story for the readers to make of them what they will, one receives the impression that he has mentally placed himself into the shoes of each of the individuals, imparting an emotional immediacy that can be felt on nearly every page. In addition, this book is a great example of a writer who knows how to successfully build suspense. Several times, Collis switches the perspective of the narrative from the Dorchester convoy to that of the Nazi U-boat Captain Karl-Jurg Wӓchter, the man who would eventually give the order to torpedo the Dorchester. The resulting effect is one of hunter-and-hunted, elucidating just how terrifying it must have been for the men aboard the convoy ships, knowing that at any moment their lives could be cut short by an enemy none of them would see before it was too late.

In the frigid February of 1943, agonizingly close to their destination in Greenland, pandemonium would strike on the Dorchester. The ultimate outcome of the next 25 minutes (the amount of time it took for the Dorchester to sink) would be decided by the harsh and unforgiving elements in combat with the crew’s will to survive. Except, there was also something else. That something was sacrifice.

“There is an incredible liberation that comes when all hope is lost.” With this single statement, Collis encapsulates what enables those caught in life-or-death situations to embrace our better angels. When our very existence hangs in the balance, everything falls away except those purest of traits which we all share: our humanity and our desperate need for God. This was the situation in which the four chaplains found themselves aboard the rapidly sinking Dorchester. Whatever doctrinal disagreements they may have had regarding each other’s spirituality, it mattered nothing at that time. They had spent time with the soldiers aboard this ship; they talked with them, laughed with them, listened to them. The soldiers knew that it didn’t matter what your personal faith was; you could find a friend in any of those men. The chaplains stayed aboard, helping whoever they could, first into the quickly overcrowding lifeboats, then steeling nerves as the freezing ocean water became the only means of escape. Then, when they sensed their work was done, the chaplains locked arms and lifted their hearts to heaven.

Meanwhile, a Black steward’s mate by the name of Charles W. David Jr. aboard one of the ships assigned to guard the Dorchester would defy all the prejudices and preconceptions that those around him may have held, and he would soon be seen clinging to a fishing net draped over the side of his ship helping drag aboard survivors.

Adolf Hitler didn’t think too highly of America. Why? In his twisted mind, he saw our cultural, ethnic, and religious diversity as mites that would gnaw at our foundation, eventually dooming us to crumble under the weight of our disunity. However, if there were one story that would prove Hitler dead wrong, it would be The Immortals.