FORT WORTH — If you ask Shelsey Scavenger what helped her rebound from a brutal assault in 2011, the former Greyhound bus driver credits two lifelines — her Catholic faith and a black-and-white spotted English setter called Fynn.

“God gave me another chance,” the 61-year-old explained, remembering when a mentally disturbed passenger she was ferrying from Los Angeles to Las Vegas beat her in the head until she was unconscious. A military veteran ran up from the back of the bus to stop the attack, but Scavenger already had sustained a concussion and blacked out.

To treat her seizures and memory loss, months of doctor visits and rehabilitation followed. While recovering from her injuries, the cradle Catholic, who attended Catholic schools in her native British Columbia, found comfort in the faith of her childhood.

“After the assault, I became a good Catholic,” Scavenger admitted, referring to her return to Mass after years of being away from the Church. “My reversion was a way of saying ‘thank you’ to God for letting me live.”

As part of her emotional rehabilitation, she began volunteering with an animal rescue group in 2012. The experience introduced her to Fynn, an energetic setter pup whose family didn’t want him anymore.

“I ended up fostering this dog and keeping him,” recalled Scavenger, who had Fynn trained as a service animal to help her deal with post-traumatic stress disorder (PTSD) and spells of anxiety. “After almost being beaten to death, he pretty much saved my life.”

The trauma of the assault not only left physical scars but also emotional damage.

“He really was a blessing to me because after the assault I didn’t want to go out or do anything. I avoided crowds,” the grateful pet owner said. “The dog brought me out of my shell and back out into the world. He made it possible for me to go to Sunday Mass and return to the workforce.”

Under the Americans with Disabilities Act, a service animal is defined as a dog trained to perform specific tasks for a person with a physical, sensory, psychiatric, or intellectual disability. There is no official Church opinion or teaching regarding service animals. 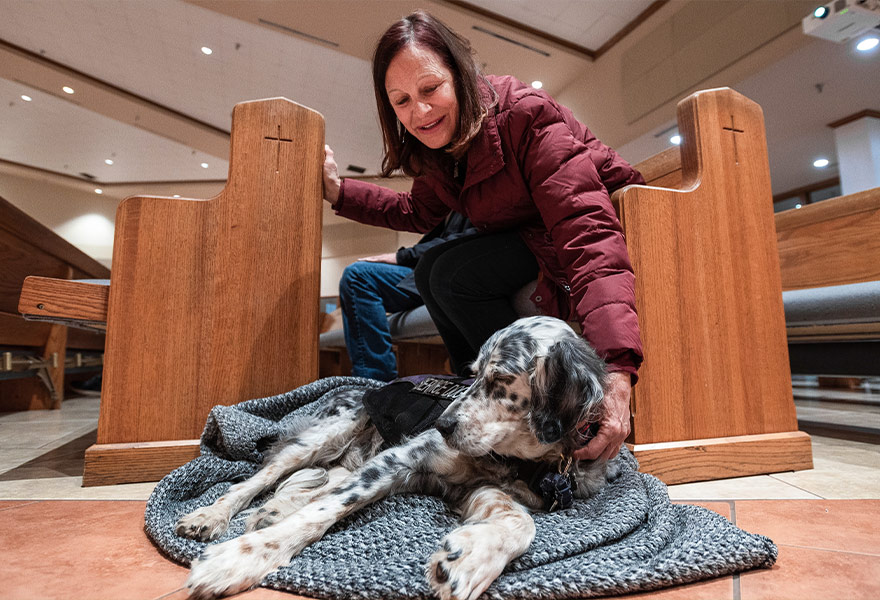 Shelsey Scavenger pets her service dog Fynn during Saturday Mass at Our Lady of Guadalupe Catholic Church in Fort Worth, on Jan. 15, 2022. (NTC/Ben Torres)

Allowed to keep her commercial driver license, Scavenger began transporting cargo in a semi-truck with Fynn resting in the cab. The long-haul journeys provided an opportunity to visit parishes across the country with the setter, wearing his service vest, at her side.

“We always went to Mass in a small town where it was easier to park an 18-wheeler,” said Scavenger who is now retired. “Parishioners, especially other dog owners, always came up to talk to me. Without the dog, I was just another faceless, middle-aged woman in church.”

Countless priests and three bishops have blessed Fynn during the past 10 years. His well-behaved presence at the side of the pew at All Saints Church is usually greeted with smiles and congenial nods from members of the congregation. The former Nevada resident moved to Fort Worth in spring 2020 and now belongs to the historic Northside parish.

“It’s a fellowship tool,” pointed out Scavenger, adding that Fynn helped her make new friends. “People like visiting with him before and after Mass.”

But the devoted pet owner is facing the prospect of losing her trusted companion. After he began limping a few weeks ago, Fynn was diagnosed with bone cancer and has weeks to live.

Scavenger appreciates the lessons learned from one of God’s creatures while relishing the few moments left with him.

“Having Fynn in my life brought me closer to God,” she said. “When he looks at me, I think of Jesus because that’s how God loves me — unconditionally.”